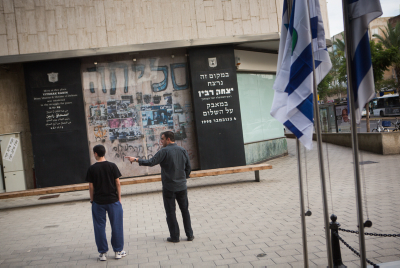 An annual memorial event on the anniversary of the murder of former Prime Minister Yitzchak Rabin could be canceled this year, Channel Two reported. The event is scheduled for next Motzoei Shabbos at Rabin Square in Tel Aviv, but a lack of funds could cause the entire event to be canceled. Missing from the budget for the event is some NIS 800,000, much of it needed for security.

Rabin was killed on November 4, 1995, and every year since then, a memorial event has been held on the weekend closest to that date. The events have been organized by a coalition of groups which funded them, but this year the coalition decided to dispense with a single major event, instead sufficing with parlor meetings. The Tel Aviv event is privately funded, as distinguished from the official government-sponsored memorial event, which is set to take place on November 13.

Observers told Channel Two that politics is one of the reasons behind the matter. In recent years, the event has taken on more of a political overtone, as a “peace rally” against the policies of the government, a phenomenon which has been aggravated since Binyamin Netanyahu became prime minister. Youth groups and other organizations that have participated in the event are said to be seeking a less politically charged atmosphere and one that does not purport to present Rabin’s legacy in terms of events that have transpired long after his death, the report said.

Even if the money is not found to conduct the event, organizers said they would meet at the Square for a “peace rally to remember Rabin, and stand against violence and racism. We will demand a deal with the Palestinians,” they told Channel Two.