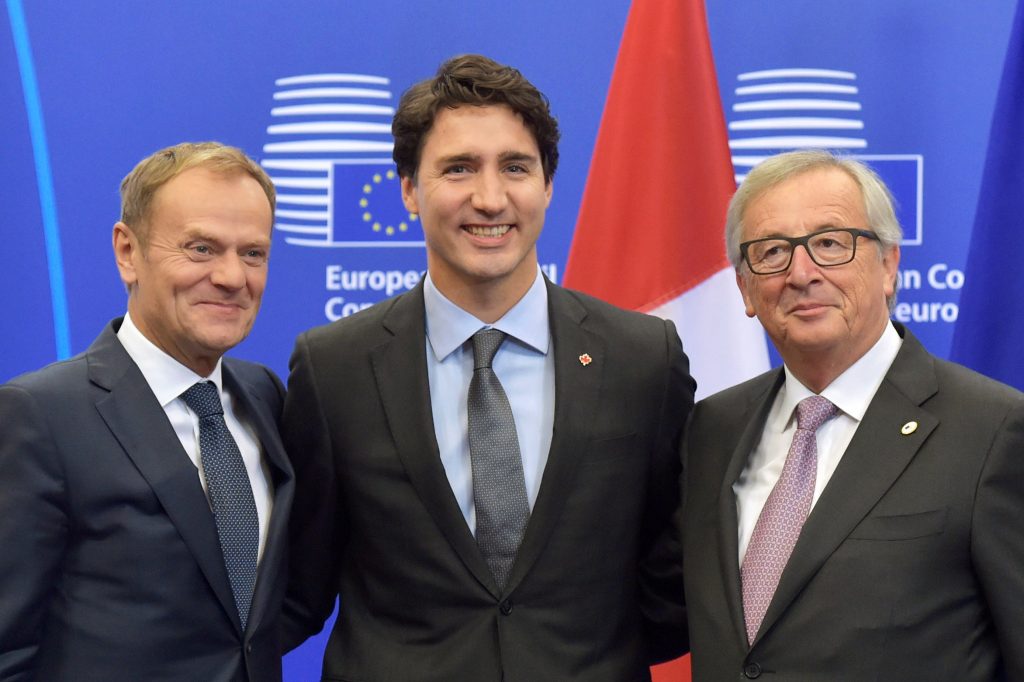 The European Union and Canada signed a free trade agreement on Sunday that aims to generate jobs and growth though it must still clear some 40 national and regional parliaments in Europe in the coming years to enter fully into force.

Canadian Prime Minister Justin Trudeau signed the treaty along with the heads of EU institutions, a step that should enable a provisional implementation of the pact early in 2017 with the removal of most import duties.

The Comprehensive Economic and Trade Agreement’s (CETA) passage has not been smooth.

French-speakers in southern Belgium, a minority within their own small country and accounting for less than 1 percent of the 508 million EU consumers likely to be affected by CETA, raised objections that held up the deal until a breakthrough on Thursday, confirmed by regional parliamentary votes on Friday.

The Canada agreement is seen as a springboard to a larger EU deal with the United States, known as the Transatlantic Trade and Investment Treaty (TTIP), which has been the target of labor unions and environmental and other protest groups.

EU Trade Commissioner Cecilia Malmstrom said TTIP talks were not dead, contrary to what some politicians in Germany and France have said, but would need to wait for the next U.S. president – taking office in January – to resume.

Supporters say CETA will increase Canadian-EU trade by 20 percent and boost the EU economy by 12 billion euros ($13 billion) a year and Canada’s by C$12 billion ($9 billion).

For Canada the deal is important to reduce its reliance on the neighboring United States as an export market.

For the EU, it is a first trade pact with a G7 country and a success plucked from the jaws of defeat at a time when the bloc’s credibility has taken a beating from Britain’s vote in June to leave after 43 years of membership.

“This has been a very long process. A huge majority of people in Europe are in favor of Europe, but there are concerns and we need to engage with them,” Malmstrom said. “The Commission cannot do that alone.”

Some 100 anti-globalization protesters clashed with police outside the venue in Brussels, trying to break down barriers in front of the main entrance and hurling red paint. A Reuters photographer saw police detain some people.

Sunday’s signing will not be the last act.

Assuming the European Parliament gives its assent, CETA could come into force partially early next year. However, full implementation, which would include a contentious investment protection system, will ensue only after clearance by more than three dozen national and regional parliaments.

The Belgian experience shows this outcome is no given.

The main focus of protests against CETA and TTIP remains the system to protect foreign company’s investments. Critics say its provision for arbitration panels to rule on disputes with states can be abused by multinational companies to dictate public policy, such as on environmental standards.

The EU and Canada say their investment protection system guarantees the right of governments to regulate, make use of independent judges and be more transparent.

The deal will eliminate tariffs on almost 99 percent of goods. The beneficiaries would include, for example, carmakers or the EU textile sector, for which Canadian duties of up to 18 percent can be imposed at present.

Service companies could also benefit and EU companies would be able to tender for public contracts at Canadian provincial and municipal level, the first time Canada has offered this.

Canada would be able to send larger quotas of pork, beef and wheat to the EU market, and EU dairy producers would be able to export more than double the current amount of “high quality” cheeses to Canada.