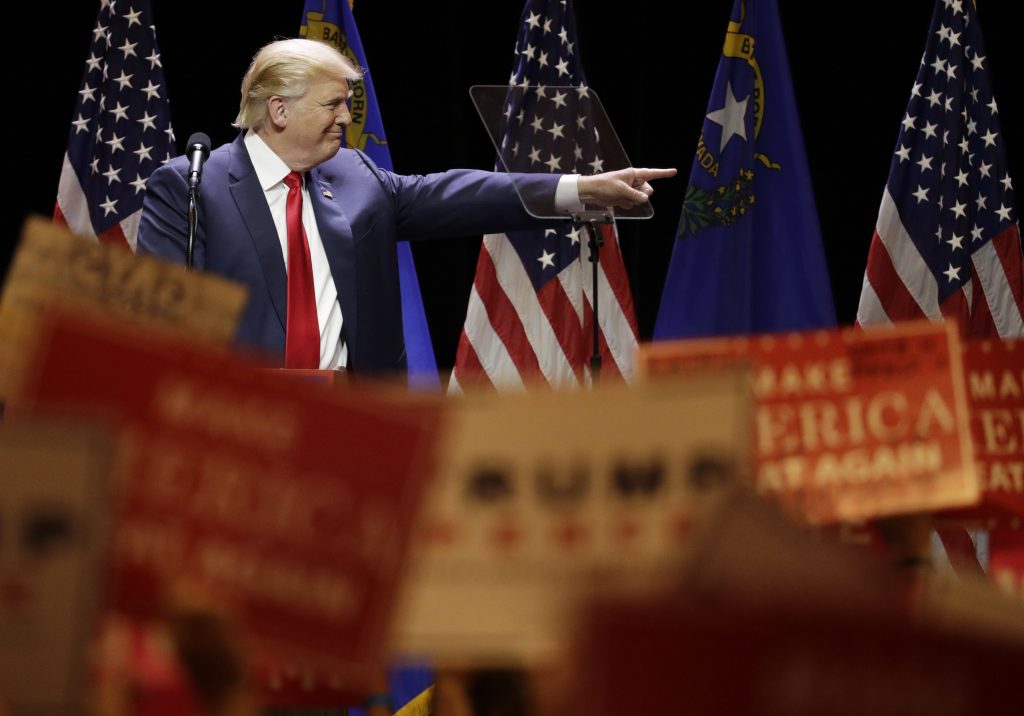 Donald Trump launched a fresh round of attacks on Hillary Clinton on Sunday over her use of a private email server while serving as secretary of state, using news that the FBI is renewing its probe to accuse her of “criminal and illegal conduct.”

“As you’ve heard it was just announced on Friday that the FBI is reopening their investigation into the criminal and illegal conduct of Hillary Clinton,” Trump said during his rally Sunday in Las Vegas. “Hillary has nobody but herself to blame for her mounting legal problems. Her criminal action was willful, deliberate, intentional and purposeful.”

Clinton on Sunday made no direct mention of the FBI controversy, but on several occasions she seemed to allude to it during campaign stops in Florida, a key battleground state.

“I want you to know, I am focused on one thing: you, the problems that keep you up at night,” Clinton said during an event in Wilton Manors, Florida. “There’s a lot of noise and distraction, but it really comes down to what kind of future we want.”

Trump’s campaign expressed optimism Sunday that they have “tremendous momentum” in the final days of the election, with national polls showing him and Hillary Clinton in a dead heat at the same time her team grapples with an announcement that the FBI is renewing a probe into her use of a private email server while at the State Department.

Trump bragged about his new strength in recent polls Sunday morning, despite repeatedly claiming in recent weeks that polls were “rigged” against him. The celebrity businessman also claimed that social-media sites “are burying the FBI criminal investigation of Clinton.”

“We are now leading in many polls, and many of these were taken before the criminal investigation announcement on Friday — great in states!” Trump tweeted Sunday.

Florida is seen as a key battleground state, with an electoral college victory for Trump seen as being nearly impossible without him winning there. Trump, however, started the day in Nevada, where he stopped by a nondenominational church in Las Vegas, where he also held a rally.

Clinton also urged churchgoers in Florida on Sunday not to be “distracted by all the noise in the political environment.” During remarks to about 300 people at the Mount Olive Baptist Church in Fort Lauderdale, one of several planned stops for the day in the Miami area, Clinton made no mention of the renewed FBI scrutiny related to the private email server she used as secretary of state — but Clinton stressed the value of perseverance when confronting obstacles in life.

“Everyone — everyone — is knocked down in life,” Clinton told the predominantly black congregation. “And as my mother showed me and taught me, what matters is whether you get back up. And those of us who are people of faith know that getting back up is what we are called to do.”

Earlier Sunday, Clinton dropped in on an early voting brunch sponsored by two Democratic groups in Miami at Fado’s, an Irish pub.

“These last nine days we can really race to the finish line,” Clinton told a crowd of about 40 people, who she urged to help elect Democrats up and down the ballot.

“If any of you know anyone who is thinking about voting for Trump, I want you to stage an intervention,” Clinton added. “Because friends don’t let friends vote for Trump.”