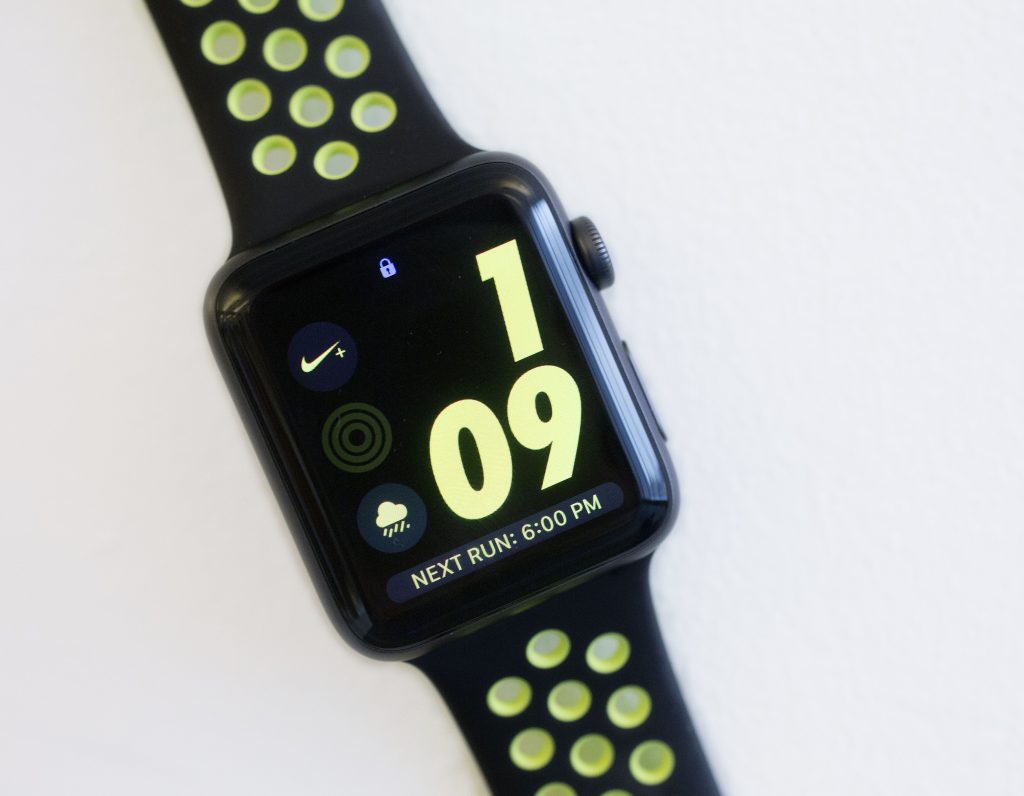 Apple isn’t the first to add GPS functionality to a smartwatch, but it’s the first to make something that feels like a running watch.

And the company is doubling down on that with a Nike edition out Friday, while Nike is bringing features from its phone app directly to all models of Apple Watch.

I’ve logged more than 400 miles over the past six weeks with the GPS edition of Apple Watch, known as Series 2. I’ve also run 34 miles with the Nike Plus version over the past few days; it’s essentially a Series 2 watch with a custom wristband and watch face. With both, Apple addressed many of the shortcomings in the original watch, GPS being just one of them. I’m not ready to ditch my Garmin running watch yet, but the Apple Watch comes close to meeting all my needs.

THE IMPORTANCE OF GPS

The original watch does a fine job of latching onto your phone’s GPS if you’re running with the phone, but with built-in GPS, you can leave the phone behind. Accuracy is on par with other good GPS watches, which is to say, measurements are sometimes off, especially when tall buildings block GPS signals. The watch automatically calibrates to my running style, so it’s better than non-GPS devices, even when there’s no GPS.

Though GPS drains the battery more quickly, the watch still had about an hour of non-GPS use left after a marathon run of about four hours, 40 minutes. For normal use, Apple says you should get up to 90 minutes a day of GPS workouts; I’ve often gone longer without the watch dying before bedtime. It helps that I’ve disabled the heart-rate sensor during workouts.

While Series 2 is meant for stand-alone running, many people carry phones anyway. With it, I get slightly better accuracy and battery life.

Series 2 watches start at $369, though it’s $30 more for a larger screen – the optimal size for larger wrists. Non-GPS models, now called Series 1, are $100 less. All models get software updates that address two gripes with the original:

– Apple’s Workout app now records your route, something other GPS fitness devices and apps have long done. The Apple app didn’t use to, even with access to the phone’s GPS.

– You can double tap the screen to record splits, or manual snapshots of how long it takes to run a stretch. Before, that was limited to mile or kilometer intervals, which didn’t help when you were running laps or loops that weren’t precisely that length.

Nike’s app offers a lot to like, including big yellow numerals for easy reading during runs and voice updates every mile and halfway toward your goal. Nike keeps things simple for beginners by displaying just distance and time; turn on advanced mode for current pace and heart rate. My gripes: no manual splits, and average pace appears only when pausing or through the voice updates.

Nike excels in trying to motivate you even when you’re not running. It will keep asking “Are we running today?” by reminding you the weather is nice or that a friend (with a watch or just the phone app) is just ahead of you for the month’s total. A scheduling feature shows you weather forecasts in half-hour increments. After making a selection, you get a notification when it’s time to run.

Though the app is available for all models, the Nike watch also has a colorful wristband sporting holes to help sweat dry. It offers custom watch faces with one-touch access to the app, plus a reminder of your next scheduled run. Most people will be fine with just the free app, but running enthusiasts can get the Nike version for the same price.

Cyclists get similar speed and distance information, though the watch doesn’t measure how fast you’re pedaling, something hard-core cyclists might want. You can swim with Series 2, even with chlorinated or salt water, something most water-resistant gadgets don’t allow. The watch measures distance indoors by counting laps, though you need a pool large enough for at least five strokes per lap.

Recording splits during runs is great, but I also want to know my average pace and time since the last split, rather than the beginning of the run. I find it useful when I want to go faster in the middle of a run before a gentle cooldown.

And while Apple Watch syncs workout data with the phone’s Activity app, many longtime runners already have their favorite online repository, whether that’s Nike, Strava or Garmin. The ability to move data around is limited. While Nike offers an Apple Watch app, it’ll take time for others to catch up. Strava’s still requires running with a phone, while Garmin doesn’t have one at all.

For these reasons, I’m sticking with my Garmin Forerunner 220.

And while it’s a minor annoyance, both Apple’s and Nike’s app do a three-second countdown before workouts. I just want to run when I hit “start.” (At least with Nike’s, you can disable the countdown deep in the phone settings.)

DO YOU NEED APPLE WATCH?

Because this review is focused on runners’ needs, I haven’t gotten into all the other features, such as maps, weather and shopping. Running watches and general-purpose fitness trackers such as Fitbit don’t offer as much. The ability to reply to messages by voice came in handy when coordinating with friends waiting at the finish line, for instance. But if you don’t need the “smarts,” a decent GPS fitness device is more than $100 cheaper.