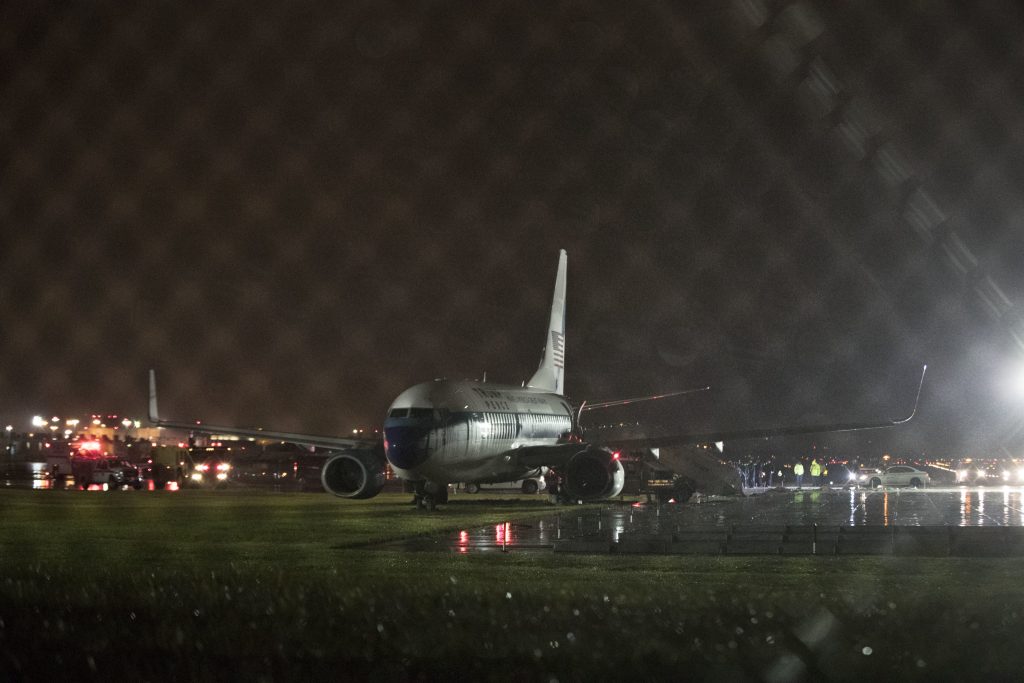 A field of aerated cement blocks that crumble under the weight of an aircraft helped prevent Republican vice presidential nominee Mike Pence’s campaign plane from barreling off a runway and onto a busy parkway nearby.

Arrestor beds have been installed at dozens of airports across the country in recent years, including in Chicago, Boston, Washington, D.C., and at the New York area’s three major airports.

The system has been compared to driving a vehicle into gradually deepening snow, according to the Port Authority of New York and New Jersey, which operates LaGuardia Airport, where Pence’s plane landed Thursday night. The collapsible blocks slope upward gradually from the ground to approximately 30 inches and can safely stop an aircraft traveling at up to 80 mph, officials said.

There had been 10 previous incidents since 1999 in the U.S. in which the beds stopped aircraft that overran runways, including three at John F. Kennedy International Airport, the Federal Aviation Administration says.

National Transportation Safety Board member Robert Sumwalt said Friday that it was a good thing the arrestor beds, called the engineered materials arrestor system, were in place at LaGuardia.

“We’re very fortunate that this runway has the EMAS on it,” Sumwalt said.

“It would have been hundreds of feet away, if I had to guess, and fortunately that was not in play tonight,” he said.

The Boeing 737 carrying Pence, 36 other passengers and 11 crew members made a hard landing in a rainstorm. The pilot slammed on the brakes, and the plane, marked with running mate Donald Trump’s “Make America Great Again” slogan, began to slide sideways. When the plane stopped in the middle of the arrestor bed, passengers could smell burning rubber. No one was injured.

The drama was captured on a recording of air-traffic-controller communications, posted on the website LiveATC.net.

“Eastern stop! Stop, Eastern!” a controller said, referring to the Trump plane, before immediately relaying instructions to an incoming JetBlue plane to abort a landing.

Trump acquired part of the old Eastern Air Lines in 1989 and ran it as a shuttle service until 1992. Thursday’s flight was a charter operated by a recently reformed Eastern Air Lines, a company spokesman said.

The jet came to rest amid the arrestor beds at LaGuardia’s Runway 22.

Sumwalt said the plane’s cockpit voice recorder and flight data recorder were recovered and would be analyzed. He said investigators will interview the flight crew and the crews of other flights that landed on the runway successfully to determine “what was different about this particular flight.”

The Port Authority assisted in developing the arrestor-bed technology, along with the University of Dayton, in Ohio, and Engineered Arresting Systems Corporation, of Logan Township, New Jersey.

The company, a subsidiary of Zodiac Aerospace, has been manufacturing arresting equipment for military aircraft for more than 70 years, vice president Kevin Quan said. It was asked by the FAA to help develop the arresting beds in the 1990s.

The first bed was installed at Kennedy Airport in 1996, and there has never been a failure, Quan said.

The Air Line Pilots Association says it has long been a proponent of the beds, comparing them to “seat belts, life preservers and other safety protections.”