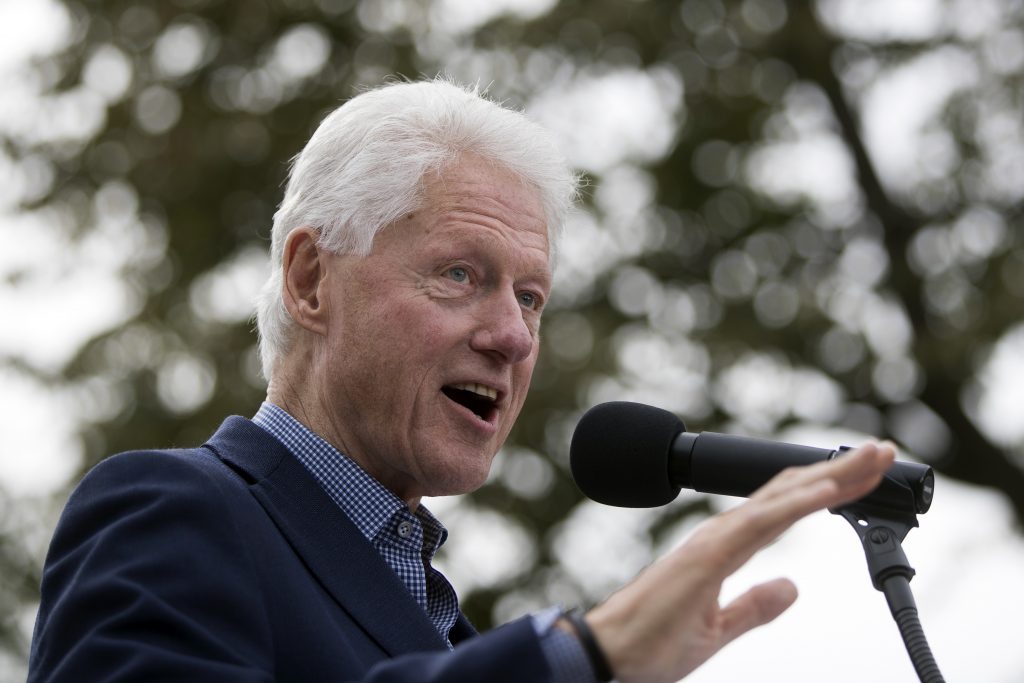 A 2011 confidential memo written by a longtime Bill Clinton aide during Hillary Clinton’s State Department tenure describes overlap between the former president’s business ventures and fund-raising for the family’s charities. The former aide also described free travel and vacations arranged for the Clintons by corporations, reinforcing ethics concerns about the Democratic presidential nominee.

The 13-page memo, by Doug Band, was included in hacked emails from the private account of Clinton campaign chairman John Podesta that were released by WikiLeaks. Band, describing the former president’s management of “Bill Clinton Inc.,” laid out the “unorthodox nature” of how he and other aides navigated between Bill Clinton’s dual interests in seeking out speaking and consulting ventures around the world while he raised funds for the Clinton Foundation.

In the November 2011 memo, Band described “more than $50 million in for-profit activity we have personally helped to secure for President Clinton to date.”

The Clinton Foundation has been among the biggest vulnerabilities in Hillary Clinton’s campaign for the White House. Clinton calendars and emails released by the State Department showed ongoing coordination among Clinton’s top aides and Bill Clinton’s top aides at the foundation and his private office. Her critics have accused her of providing favors to foundation donors, though there has been no evidence of this. She frequently met privately with people who had ties to the foundation.

Band wrote the memo to lawyers hired by the Clinton Foundation to audit the organization’s structure and operations. It did not specifically cite ethics concerns, and in a new statement Thursday Band told The Associated Press that his firm, Teneo, “never received any financial benefit or benefit of any kind” for its work for the Clinton Foundation. Band did not elaborate about what gifts Bill Clinton obtained from his speech and consulting clients,

Hillary Clinton met with or spoke to representatives of at least 15 companies and organizations that paid her husband for speaking engagements during her tenure as secretary of state, according to a review of her planning schedules from the State Department.

Months after Hillary Clinton acknowledged she had used a private email server for work messages, a longtime confidante of Podesta lashed out: “Do we actually know who told Hillary she could use a private email? And has that person been drawn and quartered?” asked Neera Tanden, president of the pro-Clinton think tank, the Center for American Progress. Top State Department officials have said no one in the agency provided such permission and they did not become aware until as late as 2014 that she had used a private server to conduct all her government business.

Band’s memo described how he and Justin Cooper, another longtime Bill Clinton aide, helped the former president and his family obtain gifts of “personal travel, hospitality, vacation” and air travel arrangements. Financial records Hillary Clinton filed between 2009 and 2013 listed speeches and limited business income that Bill Clinton earned during her government service but did not list any travel, vacation or other gifts that Band cited in his memo.

Under federal disclosure rules overseen by the U.S. Office of Government Ethics, federal officials and office seekers are not required to list gifts provided to a spouse if the gifts are “independent of their relationship to you.”

Norman Eisen, a Democrat who oversaw ethics matters for the Obama administration and in 2011 was also appointed ambassador to the Czech Republic under Hillary Clinton, said OGE rules did not require Hillary Clinton to divulge any gifts provided to Bill Clinton by his business clients.

“There’s no threat there,” Eisen said, adding that he is disturbed that “ethics become weaponized in the course of an election campaign.”

Republican presidential candidate Donald Trump has touted the WikiLeaks releases of Podesta’s emails, while the Clinton campaign has repeatedly warned that the releases have exploited emails stolen by hackers working for the Russian government.

The Clinton campaign did not immediately respond to questions from the AP about the Band memo. It said in a statement, “The Clintons are extremely proud of the work of the foundation that has helped millions of people around the world.”

Richard Painter, the top ethics official during the administration of President George W. Bush, said he was concerned with Bill Clinton’s use of aides who dealt with his private business clients as well as Clinton Foundation donors. In cases Band outlined in the memo, Clinton’s speech clients ended up as donors to his family’s charity.

“The two should not be conflated because the Clinton Foundation cannot be used for the personal enrichment of anybody including the former president,” Painter said.

At the time he wrote the memo, Band had cofounded Teneo Holdings, a New York-based global consulting firm, and was defending his work for his own firm even as he continued working for Bill Clinton and the foundation. Like the former president, other foundation officials also worked both for the charity and Bill Clinton’s private office.

Critics have raised concerns about the multiple roles of Clinton aides.