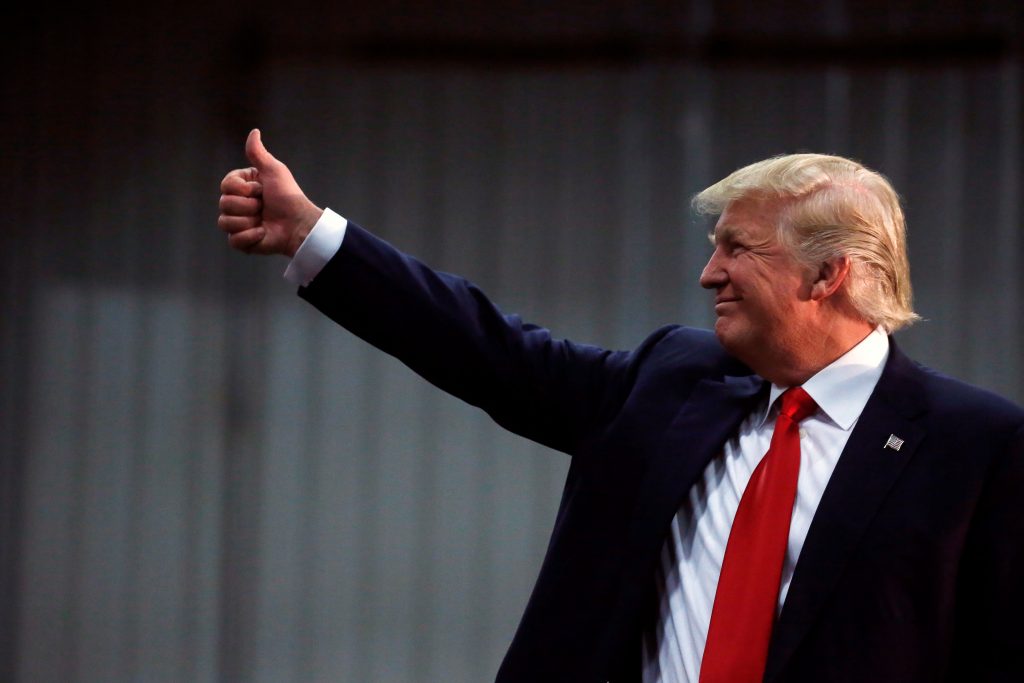 Donald Trump’s claims the presidential election is “rigged” have taken root among most of his supporters, who say they will have serious doubts about the legitimacy of the election’s outcome if Hillary Clinton wins, according to a new Associated Press-GfK poll.

Just 35 percent of Trump’s supporters say they will most likely accept the results of the election as legitimate if Clinton wins, while 64 percent say they’re more likely to have serious doubts about the accuracy of the vote count if the Republican nominee is not the victor.

“Of course I believe it’s rigged, and of course I won’t accept the results,” said Mike Cannilla, a Trump supporter from Staten Island, New York. “It’s from the top: Obama is trying to take over the country, he’s covering up all of Hillary’s crimes and he’s controlling the media trying to make Trump lose.

“Our only chance on Nov. 9 is if the military develops a conscience and takes matters into its own hands,” Cannilla said.

By contrast, 69 percent of Clinton’s supporters say they’ll accept the outcome if Trump wins. Only 30 percent of the Democratic nominee’s backers express a reluctance to accept the results if the former secretary of state loses on Election Day.

Overall, 77 percent of likely voters say they’ll accept the legitimacy of the results if Trump wins, while 70 percent say the same of a Clinton win.

In the final weeks of the campaign, Trump has made doubts about the integrity of the U.S. election system a cornerstone of his closing argument. Asked directly at the final presidential debate if he would accept the election results, Trump refused, saying: “I will keep you in suspense.”

That statement did little to harm him with his base of supporters. The poll found that 44 percent of all likely voters say Trump’s stance makes them less likely to support him, but the vast majority of his supporters say it doesn’t make a difference.

“He should fight it all the way,” said George Smith, a Trump supporter from Roswell, Georgia. “Spend weeks in court if he has to. He can’t let it be taken from him. That’s his right.”

Trump has also repeated claims that vote fraud is a widespread problem, and the poll finds that most of Trump’s supporters share that concern. Fifty-six percent think there’s a great deal of voter fraud, 36 percent believe there is some, and 6 percent say there’s hardly any.

Most Clinton supporters, 64 percent, think there’s hardly any voter fraud. Overall, just 27 percent of likely voters think there’s a great deal of fraud. A third of voters overall believe there is at least some, while 38 percent say there is hardly any.

Among Clinton supporters, 79 percent say they have a great deal or quite a bit of confidence in the vote count’s accuracy. Many believe Trump should voice support for the electoral system even in defeat.

“Be an adult. Accept the results,” said Shavone Danzy-Kinloch, a Clinton supporter from Farmingville, New York. “If the shoe was on the other foot, he’d expect Hillary to do the same.”

Although the poll shows many Trump supporters would have doubts about a Clinton win, the poll shows relatively little acute concern that claims of inaccuracy and voter fraud could prevent Americans overall from accepting the results. Just 30 percent of likely voters are extremely or very concerned about that, while another 40 percent are somewhat concerned.

Twenty-nine percent say they’re not very or not at all concerned.

“If she wins, we’re all going to have live with it,” said Daniel Ricco, a Trump supporter from Milford, Connecticut. “It won’t be good for the country, but there’s nothing we can do.”

The AP-GfK Poll of 1,546 adults, including 1,212 likely voters, was conducted online Oct. 20-24, using a sample drawn from GfK’s probability-based KnowledgePanel, which is designed to be representative of the U.S. population. The margin of sampling error for all respondents is plus or minus 2.75 percentage points, and for likely voters is plus or minus 3.1 percentage points.

Respondents were first selected randomly using telephone or mail survey methods and later interviewed online. People selected for KnowledgePanel who didn’t have access to the internet were provided access for free.