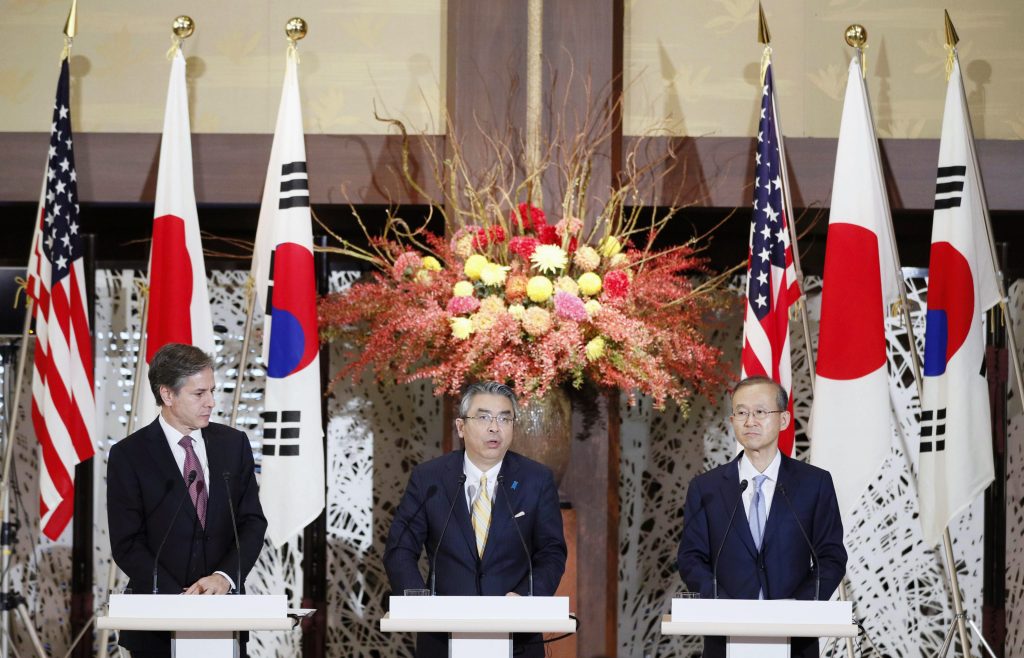 Senior officials from Japan, the United States and South Korea agreed Thursday to step up pressure on North Korea as they stick to their goal of persuading the communist state to abandon its nuclear weapons program.

Their pledge comes just two days after U.S. National Intelligence Director James Clapper publicly called that goal a “lost cause.” He said the best hope is capping its capability instead.

The deputy foreign ministers who held talks in Tokyo made it clear that North Korea now poses a new level of threat that requires broader international pressure and tougher sanctions.

U.S. Deputy Secretary of State Antony Blinken, after meeting with his Japanese and South Korean counterparts, said their policy has not changed.

Getting North Korea to give up its nuclear weapons program has long been a headache in multilateral diplomacy with Pyongyang.

Japanese Vice Foreign Minister Shinsuke Sugiyama, who hosted Thursday’s talks, cited North Korea’s recent tests, showing that the country’s missile and nuclear capability had entered a new level of threat. “We need to respond differently than in the past,” he said.

But officials did not elaborate on details of their approaches other than fresh sanctions pending at the United Nations and possible separate additional measures by the three countries.

Meanwhile, South Korea said Thursday it plans to restart talks with Japan on a military intelligence-sharing agreement to better cope with threats from North Korea.

Information from Japan’s network of satellites and other intelligence-gathering systems would be critical in monitoring and preparing against North Korea’s fast developing nuclear weapons and missile programs, said an official from Seoul’s Defense Ministry, speaking on condition of anonymity because he was citing office rules.

South Korea and Japan nearly signed a bilateral intelligence-sharing pact in 2012, but Seoul backed off at the last minute following political outcry at home. Many South Koreans hold resentment over Japan’s brutal occupation of the Korean Peninsula before the end of World War II and express uneasiness about the country’s military role in the region.