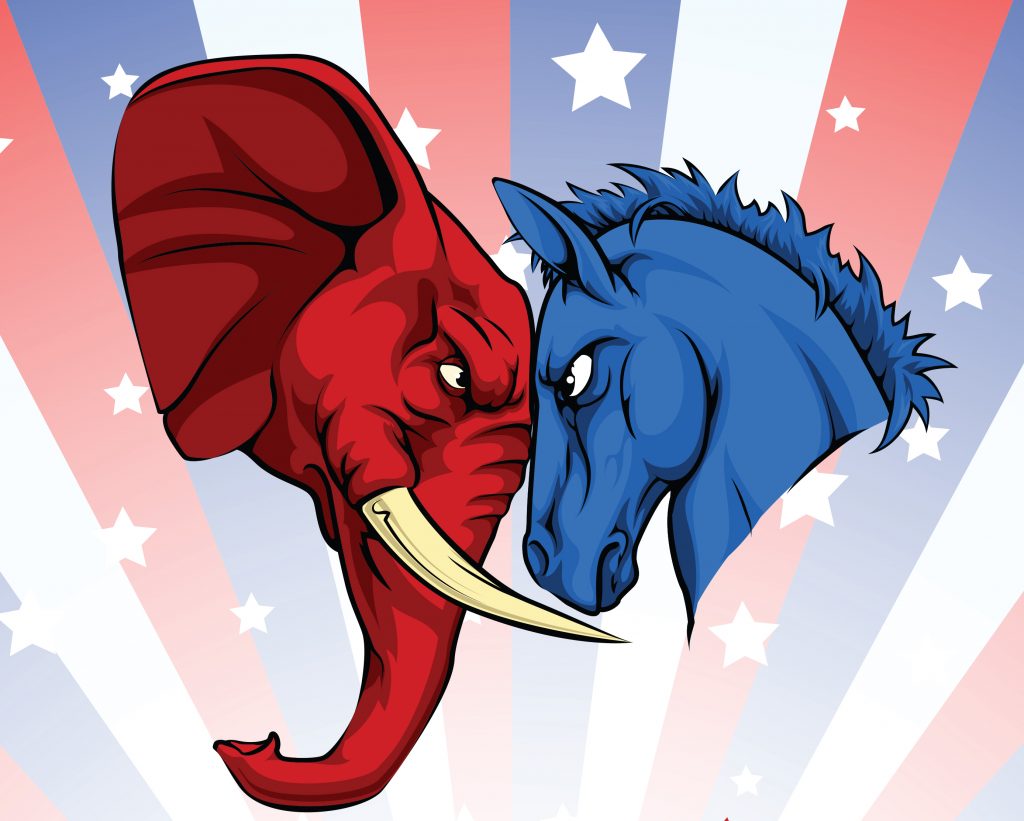 Ugly political rhetoric and defamatory advertising is nothing new. But the most effective political ads leverage the power of Schwartz’s Law of Advertising

Nobody Else will tell you this:

Capitol Hill in Washington, D.C., was once a valley. Centuries of mudslinging turned it into a hill.

Considering the volcanic eruptions spewing out of the current election, Capitol Hill might soon be renamed Mount Vituperative.

But there’s nothing new under the sun. There is an ugly history of political rhetoric. Courtesy and campaigning don’t mix. “Nice guys finish last.” (Note: The Oxford Dictionary of Quotations credits Leo Durocher for that phrase, but it’s not what he originally said — The Quote Verifier, Ralph Keyes.) As one news commentator put it, “Gentlemen don’t win elections.”

Every carnival has its cons. In 2008, the race card became a wild card that would beat any hand. But even back in 1964, racism was already off to the races. One attack ad showed Ku Klux Klansmen and a burning cross, followed by the quote: “We represent the majority of the people in Alabama who hate …” The full quote is too vile to repeat, but it closed with: “So said Robert Creel of the Alabama Klu Klux Klan. He also said, ‘I like Barry Goldwater. He needs our help.’”

Now the boys in white sheets are back at it again. Recent ads and tweets echo the content and tone of 1964, showing Klansmen declaring their support for Donald Trump. Echoing that message, Mrs. Clinton tweeted, “There’s a reason the most hateful fringe of the right wing is supporting Donald Trump.” Then that was followed by her deplorables basket-case gaffe.

As for Mr. Trump, he can’t seem to stop ruffling feathers — in speeches and on Twitter. Some of his tweets sound more like honks or squawks. Nary a warble.

(Tweets seem to have replaced “statements” and “sound bites” as the lingua franca of political discourse. Disclosure: I use Twitter, but I know enough to head for cover when a flock of birds heads my way.)

Back in 1964, the KKK ad wasn’t what defeated Barry Goldwater. The nuclear meltdown of his campaign was triggered by a little girl with a daisy. The legendary “Daisy ad” was so powerful that it became the focus of national debate and media history.

David Ogilvy, the father of modern advertising, refused to take political candidates as clients for his agency. One reason was “to avoid the political chicanery which is endemic to all political campaigns.” In Confessions of an Advertising Man, Ogilvy wrote:

“In 1952 my old friend Rosser Reeves advertised General Eisenhower as if he were a tube of toothpaste. He created fifty commercials in which the General was made to read out hand-lettered answers to a series of phony questions from imaginary citizens. Like this:

“Citizen: Mr. Eisenhower, what about the high cost of living?

“General: My wife Mamie worries about the same thing. I tell her it’s our job to change that on November 4th.

“Between takes the General was heard to say, ‘To think that an old soldier should come to this.’”

For the 1964 presidential election, Doyle Dane Bernbach (DDB) advertising agency was hired to bring a new method to the madness of political advertising. The same agency that gave us “You Don’t Have to be Jewish to Love Levy’s Real Jewish Rye” and “We Try Harder” (Avis Car Rental) was now going to sell a president.

Schwartz, a master of electronic media, was often tapped to create the sound for commercials. But when agencies labeled him a “sound effects genius” he called it a “deadly compliment.” In The Responsive Chord, he said, “I have no interest in sound effects. I am solely interested in the effect of sound on people.”

Schwartz said, “Ehrlich told me he had a special project for me. We met, and he took out a photograph of President Johnson, held it up before me, and said, ‘Will you work for this product?’”

The result was the most devastating political ad of all time. Pundits credit (or blame) that single ad for clinching the election for Lyndon Johnson.

The ad ends with, “Vote for President Johnson on November 3. The stakes are too high for you to stay home.”

The Daisy ad only ran once. Contrary to many of the later reports — and cries of “foul” from Republicans — the ad never even mentioned Barry Goldwater. But it so effectively evoked the public’s existing perceptions and fears that Goldwater, if elected, might use nuclear weapons, that it nuked his bid for the presidency.

It played on the fact that Goldwater said in an interview that it would be possible to use tactical atomic weapons to defoliate forests in North Vietnam, to flush out guerrillas. This was widely interpreted to mean that he was ready to use nuclear weapons.

As Schwartz explained, “The best political commercials are Rorschach patterns. They do not tell the viewer anything. They surface his feelings and provide a context for him to express these feelings.”

The Daisy ad struck a “responsive chord” in the public. People were afraid that Goldwater might start a nuclear war. But, as Schwartz said, “This mistrust was not in the Daisy spot. It was in the people.” … It “evoked these feelings and allowed people to express what they inherently believed.”

Why was it so effective? It was a principle of marketing communications that I call Schwartz’s Law:

Effective advertising is neither entertainment nor education. The key is to connect with what people already think, feel and desire. Don’t teach. Don’t try to change their minds. You have to touch on what they already believe, and elicit feelings they already have. When the message resonates, they respond.

In other words: Don’t educate. Evoke.

And have a blast.