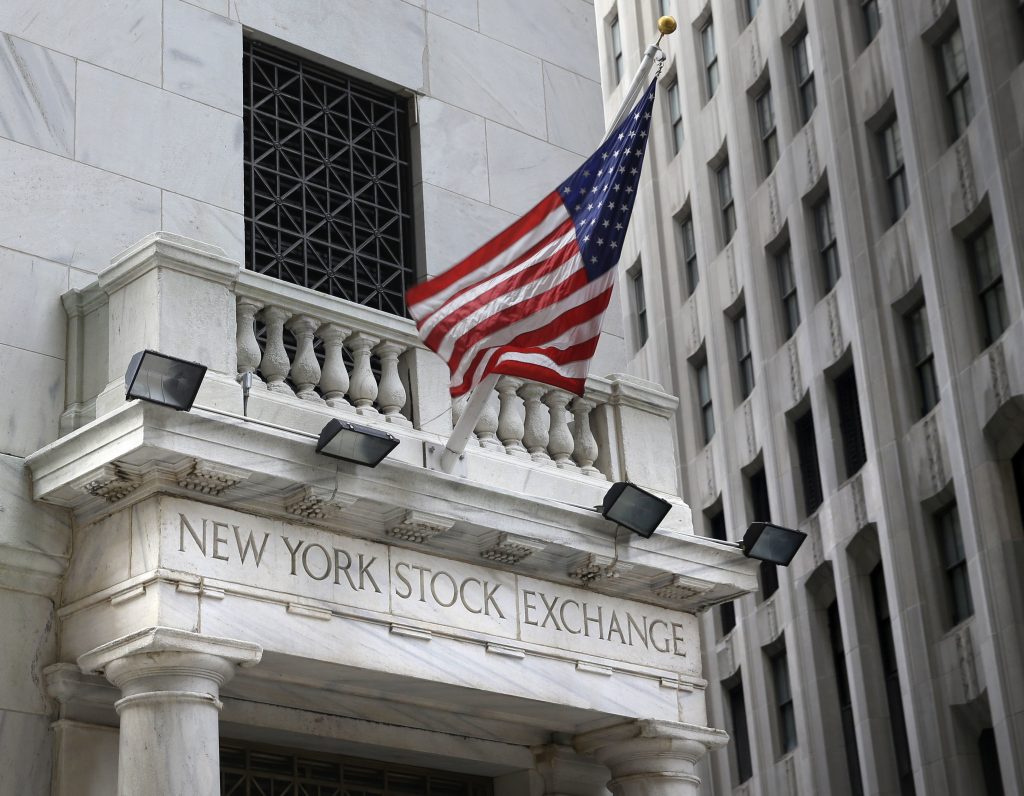 U.S. stocks are slightly lower Wednesday afternoon as real estate companies skid. Apple is sliding after its latest results failed to impress investors, pulling technology stocks down with it. However, banks and industrial companies are trading higher.

APPLE CORED: Apple sank $3.08, or 2.6 percent, to $115.18. The company’s iPhone sales fell 5 percent from a year ago. Apple gets about two-thirds of its revenue from iPhone sales and some investors are concerned it depends too much on its marquee product. Apple said it expects sales to start growing again in the holiday season after a recent slump. Investors had thought the same: Apple stock has climbed over the last few months to reach new highs for the year.

BANKS: Financial firms continued to report strong third-quarter results, as they’ve been doing for more than a week. Regional bank Huntington Bancshares gained 57 cents, or 5.6 percent, to $10.76 and insurer Chubb rose $3.70, or 3 percent, to $126.15. Banks also got a boost from higher bond yields, which are linked to higher interest rates and bigger profits on loans.

MALLS MAULED: Real estate investment trusts took big losses. Simon Property Group, which owns shopping mall and other real estate and is the largest publicly traded company in the industry, reported strong earnings. But analysts were worried about its performance, including lower income from stores that have been open for more than a year. Its stock fell $6.66, or 3.4 percent, to $190.61.

Office space company Boston Properties lost $3.06, or 2.4 percent, to $122.27 as investors were disappointed by its forecasts.

INDUSTRIAL STRENGTH: Manufacturers made some of the largest gains Wednesday. Boeing climbed $5.97, or 4.3 percent, to $145 after it raised its forecast for earnings, revenue, and plane deliveries. Defense contractor Northrop Grumman also boosted its annual forecasts, and its stock gained $7.46, or 3.4 percent, to $226.99. Manufacturer Ingersoll-Rand picked up $2.08, or 3.2 percent, to $66.68 following its report.

FIND THE PULSE: Medical device maker Edwards Lifesciences reported disappointing sales of heart devices and forecast another shortfall in the current quarter. Its stock slid $15.44, or 13.6 percent, to $98.24.

SNACK ATTACK: Mondelez, the maker of Oreo cookies, Cadbury chocolate and Trident gum, climbed after reporting a bigger profit than analysts expected. The company’s stock picked up $1.45, or 3.4 percent, to $44.21.

CHIPOTLE GETS GRILLED: Mexican food chain Chipotle continued to struggle in its efforts to win back customers after food safety scares that started last year. Its sales fell for the fourth quarter in a row and were worse than analysts expected. The stock lost $34.75, or 8.6 percent, to $370.92.

TECH GAINERS: Akamai Technologies rose $8.78, or 14.9 percent, to $67.85 on a bigger profit and better sales for the cloud services company. Juniper Networks, a computer network equipment maker, gained $2.69, or 11.3 percent, to $26.41 after investors were pleased with its projections.

FASTEN YOUR SEATBELTS: Southwest Airlines gave a weak revenue forecast for the rest of the year. Ticket prices have been falling for two years and Southwest said prices are still “soft” while its spending grew. The stock lost $2.98, or 7.1 percent, to $38.97. American Airlines and United also traded lower.

MYLAN MISERY: Drugmaker Mylan fell after investors learned that an allergy injection that competes with Mylan’s EpiPen shot will go back on sale in 2017. Kaleo Pharmaceuticals’ Auvi-Q was taken off the market last year because of the potential for inaccurate dosing, and EpiPen hasn’t had direct competition since then.

Over the last few months Mylan has come under fire for repeatedly raising the price of EpiPen. Its price has roughly doubled since 2007. Mylan stock lost 91 cents, or 2.3 percent, to $37.77 and it’s down 22 percent since mid-August.