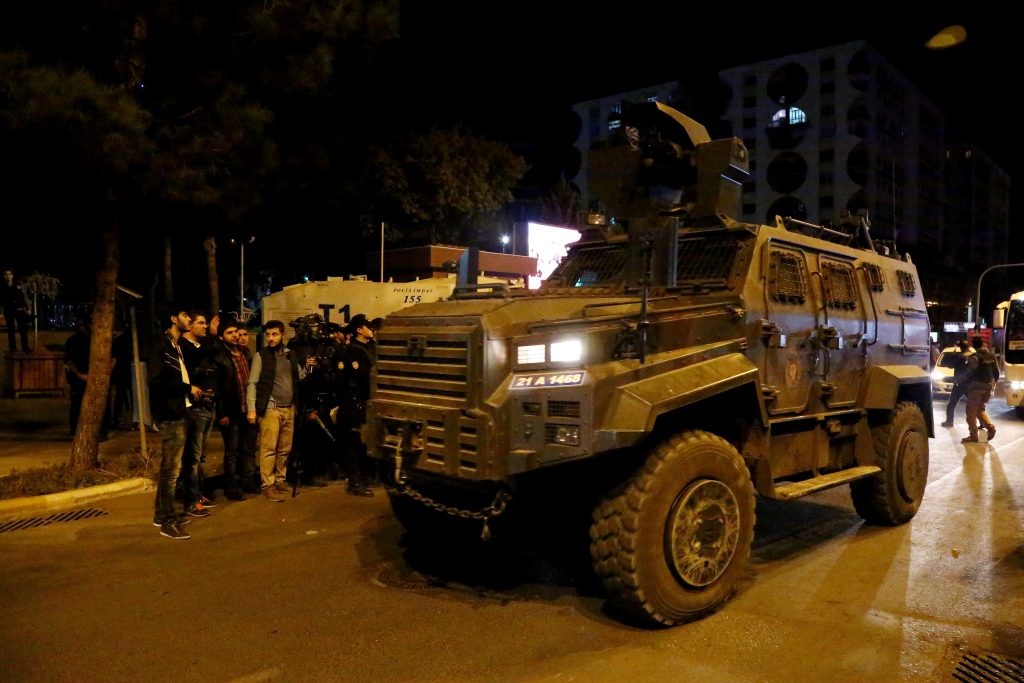 Turkey said on Wednesday it will press its military offensive in Syria until the Islamic State terror group is driven from the town of al-Bab, despite a warning from forces allied to Syrian President Bashar al-Assad and a helicopter attack on the rebels it backs.

Turkey’s incursion into Syria, launched two months ago to drive Islamic State from its border and prevent Kurdish militia fighters gaining ground in their wake, has complicated an already messy battlefield in northern Syria.

As the Turkish-backed rebels push south towards al-Bab, an Islamic State-held town 22 miles northeast of Aleppo, they face confrontation with both Kurdish and pro-Assad forces, whose frontlines lie close by.

The field commander of the forces allied to the Syrian leader – which include the Lebanese group Hezbollah, Iraqi militias and the Iranian Revolutionary Guards – warned Turkey any advance towards their positions north and east of Aleppo would be met “decisively and with force.”

The commander, who was not identified by name, nationality or affiliation made the comments during a tour of frontlines to the north of Aleppo in a written statement sent to Reuters. They came a day after what the Turkish military said was a barrel bomb attack on the rebels its backs by a Syrian helicopter.

“This kind of attack will not stop our fight against Daesh (Islamic State),” Turkish Foreign Minister Mevlut Cavusoglu told a news conference in the capital Ankara.

“This operation will continue until al-Bab. The operation needs to continue, and it will,” he said.

The Turkish military said a helicopter “assessed to belong to regime forces” bombed the rebels in a village near Akhtarin, a town 3 miles southeast of Dabiq, late on Tuesday. Dabiq is a former Islamic State stronghold which the rebels seized from the jihadists this month.

It was the first time a direct clash between Syrian forces and the Turkish-backed rebels has been announced. Two rebels were killed and five wounded, the Turkish army said.

The Syrian military could not immediately be reached for comment, but it said last week that the presence of Turkish troops on Syrian soil was a “dangerous escalation and flagrant breach of Syria’s sovereignty.” It warned it would bring down any Turkish warplanes entering Syrian air space.

Turkey launched “Operation Euphrates Shield” two months ago, sending tanks and warplanes into Syria in support of the largely Turkmen and Arab rebels. President Tayyip Erdogan has also said the operation will continue to al-Bab, which the Kurdish YPG militia is also seeking to control.