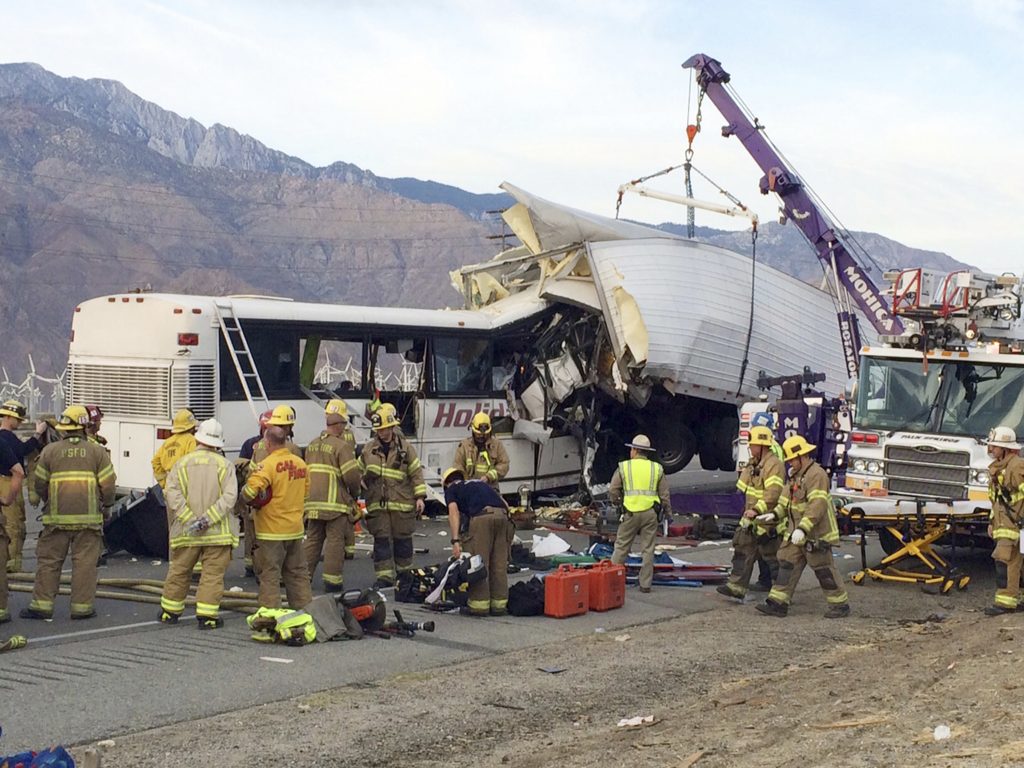 The treads on half the tires of a tour bus that slammed into a tractor-trailer on a desert freeway, killing 13 people, were worn down to an unsafe level, a federal investigator said Tuesday as authorities worked to determine the cause of one of California’s deadliest highway crashes.

The condition of the four faulty tires meant the 1996 bus was out of compliance with federal standards and could have been taken out of service, Earl Weener, a board member of the National Transportation Safety Board, said at a news conference in Palm Desert, near the site of Sunday’s crash that also injured 31 people on Interstate 10.

Despite the discovery, the cause of the crash remained undetermined and the NTSB was expected to take about a year to complete its investigation.

The California Highway Patrol has said there was no indication that the driver, Teodulo Elias Vides, applied his brakes before hitting the truck that was going about 5 mph because of utility work being done in the area. The bus was traveling at freeway speed, officials said.

Vides was among those killed in the crash.

Records kept by the CHP show that USA Holiday had been deemed unsatisfactory on several levels in the past, though it had not received that rating since 2010, when an unnamed company driver received an “unsatisfactory” rating overall and in relation to “controlled substance and alcohol testing results,” the records show.

An unsatisfactory rating could be a paperwork issue or a genuine safety concern, and because the CHP only retains records for four years, none of the original reports from 2010 and before on USA Holiday still exist, the agency said.

“This is not out of the norm. Commercial motor vehicle operation and the requirements that go along with that are complex and extensive,” said Cullen Sisskind, manager of the CHP’s motor carrier safety program.

USA Holiday had past problems but then appears to have self-corrected “and has had a very good record” over the past few years, Sisskind said.

From 2005 through 2008, the company received a cluster of unsatisfactory ratings for maintenance, equipment and issues involving a driver. In 2011, Vides was pulled over for going more than 80 mph in a 70 mph zone a few miles from the site where the crash occurred Sunday.

He was also cited for driving with a suspended license but the charge was dropped when Vides later produced a valid license, according to court records.

Vides, who is listed as the company’s only driver in federal and state records, liked to joke with customers and playfully urged them during gambling excursions to casinos to save enough money for hamburgers, said Alba Martinez, a former customer. He told customers in Spanish as they returned to Los Angeles at sunrise from their weekend jaunts, “We’ve arrived at reality.”

Martinez, 43, once asked Vides why he joked with his customers and he replied: “It’s so they have some fun.”

Rosa Ruiz was returning from her second bus trip to a casino within a 24-hour period when she was killed in Sunday’s early morning crash, her daughter said.

Jenny Ruiz said she last saw her mother on Friday evening before she boarded a bus for the Pala Casino, about 2 1/2 hours away in San Diego County.

A dozen people who had ridden with Vides gathered to share memories of those who had died and to leave candles, flowers and memories at a makeshift memorial on a street corner in Los Angeles where casino-bound passengers regularly boarded the bus with Vides.

Tony Arceo, 31, said he was lucky his parents were sitting in the back of the bus when it crashed on Sunday.

His mother, a candy factory worker, broke her jaw in three places after she was trapped beneath another passenger. His father, a retired car wash worker, was pinned between two seats.

Elena Castillo, 68, said she began traveling with Vides in 2000 and recalled how the driver would chat with passengers sitting up front. She said he was friendly and took his work seriously. She remembered him offering her words of comfort when she was going through a divorce.

Blanca Lopez said she had gone to gamble at another Southern California casino on Friday night and was headed out again Saturday with Vides’ group when her sister stopped her, saying she was only going to lose more money.

“I was going with my purse, and I just stayed, sitting on the couch,” said Lopez, 70, a retired seamstress originally from El Salvador. “I would have died.”