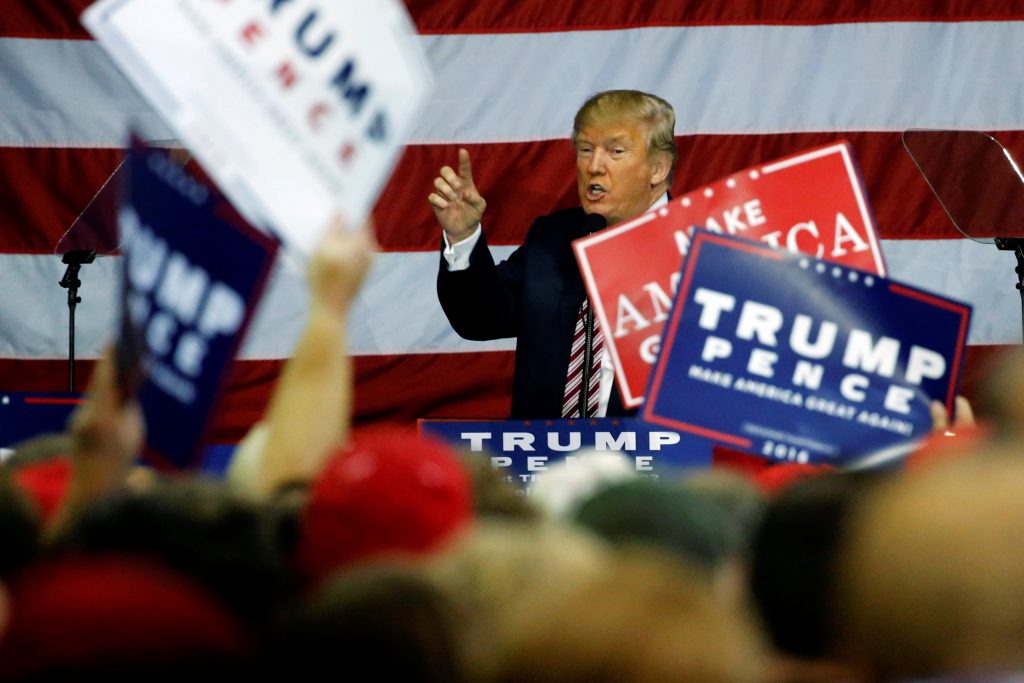 Donald Trump made light Thursday of his refusal to promise that he would accept the results of the election.

“I want to make a major announcement today,” he said during his first rally since Wednesday’s debate, held at a large barn in Delaware, Ohio. “I would like to promise and pledge to all of my voters and supporters and to all of the people of the United States that I will totally accept the results of this great and historic presidential election — if I win.”

As is often the case with Trump, his attempt to recast an assertion that caused him political trouble was laced with grievances and qualifiers, and in this case, more unsubstantiated accusations that the election would be improper.

Trump’s debate performance Wednesday drew bipartisan rebukes after he twice refused to promise that he would concede a clear victory if his opponent, Hillary Clinton, wins the election.

“I will keep you in suspense,” Trump said during the debate.

The notion that he would refuse to concede a clear result defies American democratic tradition, which depends on a peaceful transition of power. Trump insisted Thursday that he was merely preserving his right to contest a close election, comparing his stance to that of Al Gore and George W. Bush during the 2000 recount.

“Of course, I would accept a clear election result,” he said. “But I would also reserve my right to contest or file a legal challenge in the case of a questionable result. And always I would abide by all of the rules and traditions of all of the many candidates that have come before me.”

But neither nominee in 2000 left doubt that they would concede the race once all legal options and requests for recounts were exhausted, different from Trump’s insistence that a loss by him could only be the result of widespread fraud.

Indeed, Trump repeated unfounded allegations that the election would be fraudulent. Elections experts say there is no evidence of widespread fraud in prior presidential elections, which are decentralized across thousands of localities.

At the rally, Trump also accused Clinton of accessing debate questions beforehand. Donna Brazile, a former CNN contributor who now heads the Democratic National Committee, suggested in an email released by WikiLeaks that she could get Clinton a question before a primary debate against Bernie Sanders. After the email emerged, Brazile denied supplying Clinton a question.

“Can you imagine if I got the questions?” Trump said. “They would call for the reestablishment of the electric chair.”

He compared the accusation to Clinton receiving the questions to the scandals that rocked quiz shows in the 1950s.