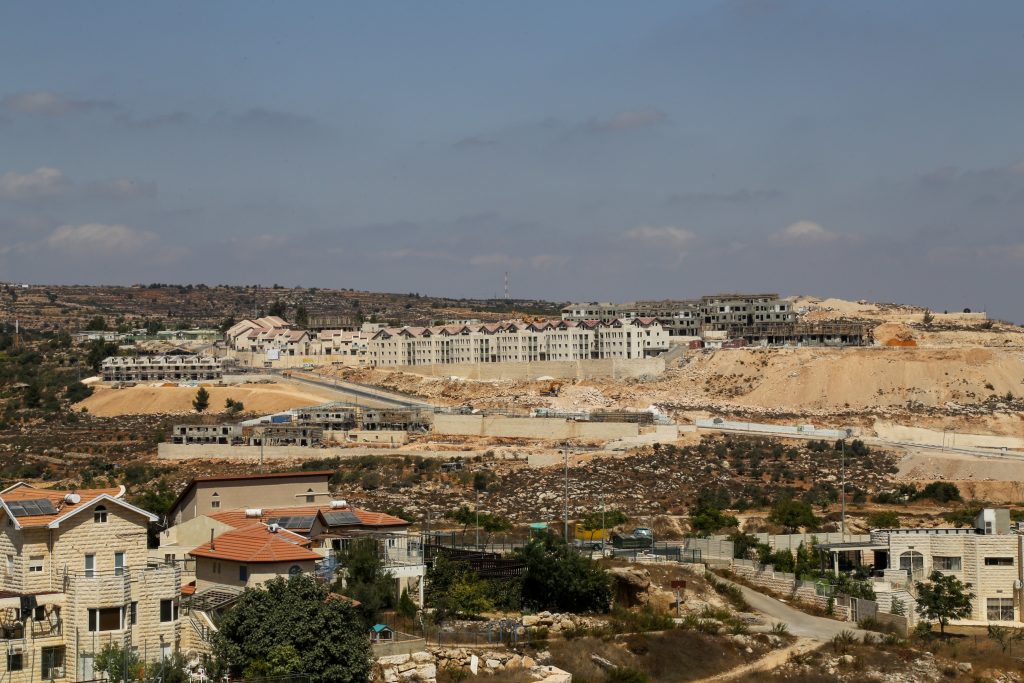 The gathering wasn’t exactly unprecedented. Jewish settlers and their Palestinian neighbors have met quietly before, many times. But not like this. This meeting, this was rare.

Efrat is a bedroom community of 10,000 affluent Jews, including many Americans, a few miles south of Beit Lechem in the Yehudah region. The residents of Efrat live the good life in a growing hilltop community.

The Efrat mayor, Oded Revivi, who is also a colonel in the Israeli army reserves, invited Palestinians from surrounding villages to come to his house and celebrate the Jewish holiday of Sukkot, when the faithful gather in palm-roofed huts, a remembrance of their 40 years of wandering landless in the desert, back in the time of Moshe.

A couple dozen Palestinians accepted the mayor’s invitation earlier this week to share brownies, grapes, cookies, apples and coffee, alongside another 30 Israeli residents. This was a first.

The idea? The sides were here to talk, perhaps even to bond — no matter if the dynamic was a little awkward and asymmetrical.

For the Palestinians, maybe it was like having holiday dinner with your boss.

Among the attendees were an Israeli army general and the top commander of the Israeli national police in Yehudah and Shomron area. Many of the Palestinians work or had worked as laborers in Efrat.

Everyone was very polite. A Palestinian farmer sat next to an Israeli diplomat. They live a mile and a world apart. A Rabbi from Efrat broke bread with a Palestinian stone mason. Guests shook hands, took selfies, patted each other on the back. Both sides seemed a little stunned to be together celebrating a Jewish holiday.

The Palestinians spoke decent to fluent Hebrew. The residents didn’t speak much Arabic.

One Palestinian stood and told the guests he didn’t want to see the area “turn into Syria.”

Another said he didn’t like “being lumped together with the terrorists.”

Everyone talked about peace. Nobody really talked about one state or two states. They didn’t mention Prime Minister Netanyahu or Palestinian Authority President Abbas.

Some Palestinian guests felt comfortable enough to complain out loud about how they are treated. Some Israelis mentioned the wave of Palestinian stabbing attacks against them.

There were some remarkable moments.

Ahmad Mousa, 58, a contractor from the neighboring Palestinian village of Wadi Al Nis, said, “We consider ourselves part of the family, part of the people of Efrat.”

You do not hear that much in the area, at least not in public, with smartphone cameras rolling.

He said, “Seventy percent of our village works in Efrat. They treat us very well and we are very good to them, too.”

Noman Othman, 41, a construction worker from Wadi Al Nis, said this was his first time as a guest in a home in the area, though he had worked here for years, building houses.

“This is good,” he said. “Our relationship is evolving.”

Asked if he bore any grudge against the expansion of Jewish homes in Yehudah and Shomron, now home to 400,000 residents. Othman said nope. He didn’t have any problem with Efrat.

If there was a Palestinian state someday, a dream Palestinians say is growing more distant, Othman said the Jews in Efrat “should stay on their land.”

He saw it this way: “These are their houses. They bought them with their own money. We should have no problem living together — if there is peace.”

Ali Musa, 49, came from the village of Al Khader. He told the gathering, “I came for a reason. I came to talk about our relationship, between you and us.”

He reminded his hosts that there is a locked yellow gate that blocks the entrance to his village, a closure enforced by Israeli security forces. “That gate should be removed,” Musa said.

He added, “And that racist sign? That should also be removed. It’s outrageous. It prevents our Jewish friends from visiting us.”

Musa was referring to the large red signs posted across Yehudah and Shomron warning Israelis in capital letters that it is against the law and “dangerous to your lives” to enter “Area A,” cities and villages under full control of the Palestinian Authority.

The mayor gave a short speech. “Some people say there will be one state, some say two states,” Revivi said. “As neighbors we are already living together.”

The mayor is also a leader of the Yesha Council, the administrative body that represents Jewish settlers in Yehudah and Shomron, a group whose members are ascendant in Israeli politics and oppose a two-state solution.

Revivi hailed the men who came to his home as “true men, courageous men. I know there were men I invited and they did not come. Because this takes initiative and courage.”

Revivi did not have to explain this. Palestinians may work in Jewish areas without social censure, but Palestinian society discourages its people from mingling with police officers and soldier, ever wary of collaboration and a process that Palestinians call “normalization,” which they see as a way for Israel, little by little, to use people’s natural inclination to seek accord … and surrender their struggle for their own state.

Efrat’s mayor said that in the last few years he has traveled to neighboring Palestinian villages to celebrate Muslim holidays. His neighbors slaughter a lamb. He has photos on his smartphone. There is a feast. It is important to keep the lines of communication open, he said.

Here “keeping the peace” is not just words. The mayor said more than a thousand Palestinians work daily in the Efrat settlement; at the shops, sweeping the streets, maintaining the infrastructure, fixing the solar panels, building the new houses, remodeling the older ones.

Efrat is just a few miles down the road from the notorious Gush Etzion Junction, scene of more than a dozen Palestinian attacks in the last year. It is also located on land the Palestinians want for their future state.

The mayor said relations became closer with neighboring Palestinians after a recent tragedy.

A driver from Efrat struck and killed a young Palestinian girl on the road leading away from the settlement. Her twin sister was a few feet away. She saw the whole thing.

Revivi went to the wake and expressed his sorrow to the family. He promised there would be a full investigation. The mayor confessed he was worried that the Palestinian reaction could unspool in retributive violence.

The Palestinian family agreed it was an accident.

“The mayor came and paid his condolences. That is why I am here,” said Mohammed Mahmoud Musa, 62, a farmer and the girl’s grandfather.

Revivi got the Israeli military to erect speed bumps. Palestinian guests said it should not have taken a death — and that their own appeals for speed bumps would have been ignored.

Toward the end of the gathering, a Palestinian named Said Abu Hamad and an Israeli security officer at Efrat, Chaim Citon, posed for a photograph together.