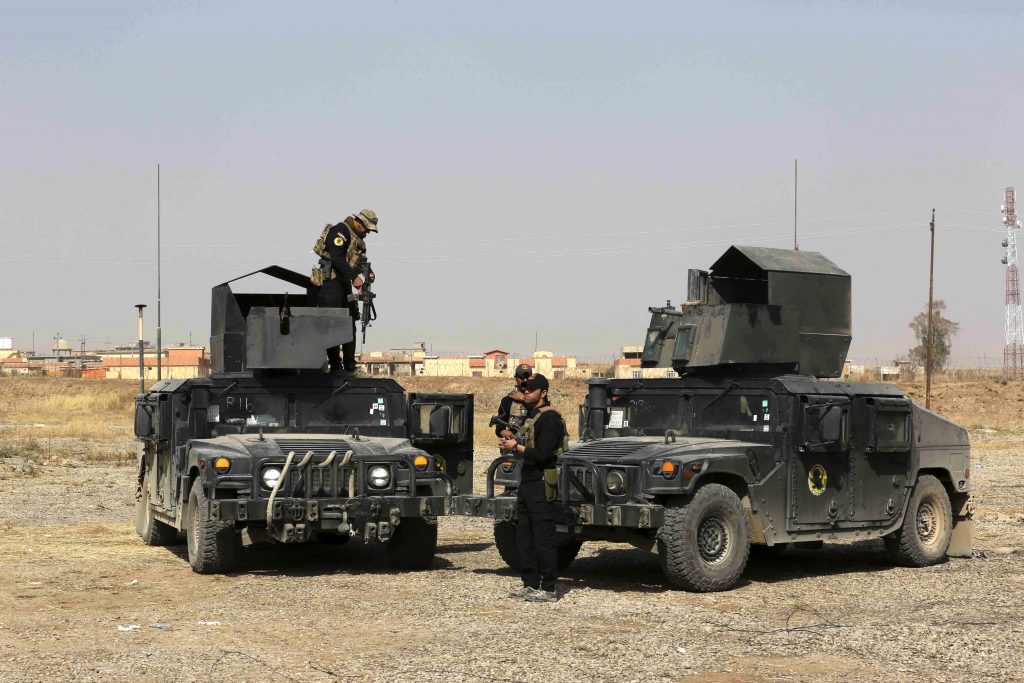 A senior Iraqi general on Wednesday called on Iraqis fighting for the Islamic State terror group in Mosul to surrender as a wide-scale operation to retake the terrorist-held city entered its third day.

Lt. Gen. Talib Shaghati told reporters at a military base on Tuesday that up to 6,000 IS terrorists are inside the city. He did not say how many of them are foreigners.

IS captured Mosul, Iraq’s second largest city, in a lightning advance in the summer of 2014. The terrorist group has suffered a string of defeats over the past year, and Mosul is its last major urban bastion in Iraq.

So far, the terrorists have put up fierce resistance in villages surrounding the city, where most of the fighting has been concentrated. IS has sent trucks loaded with explosives careening toward the front lines and fired mortars to slow the Iraqi forces’ advance.

An Iraqi officer from the 9th Division told The Associated Press that his troops were now around half a mile away from Hamdaniyah, a historically Christian town also known as Bakhdida, to the east of Mosul.

Over the past day, IS sent 12 car bombs, all of which were blown up before reaching their targets, he said, adding that Iraqi troops suffered a small number of casualties from the mortar rounds. The officer, who spoke on condition of anonymity because he was not authorized to talk to reporters, did not provide specific figures.

The operation to retake Mosul is the largest launched by the Iraqi army since the 2003 U.S.-led invasion. Some 25,000 troops, including Sunni tribal fighters, Kurdish forces known as the peshmerga and state-sanctioned Shiite militias known as the Popular Mobilization Units are approaching the city from different directions.

The participation of the Shiite militias in the operation to retake the mainly Sunni Mosul has raised concerns that the campaign could inflame sectarian tensions. Rights groups have accused the Shiite militias of abuses in past campaigns against IS-held areas.

In a bid to alleviate those concerns, Shiite militia leaders on Tuesday announced that they will only focus on capturing the mostly Shiite town of Tal Afar to the west of Mosul, and not enter the city itself.

“The only troops who will enter Mosul are the army and police, not the Popular Mobilization Units or the peshmerga,” said Hadi al-Amiri, the leader of the Badr Brigade, one of the largest Shiite militias.

“This has been agreed upon,” he said at a press conference in the Shiite city of Najaf.

Amnesty International said in a report released Tuesday that Iraqi government and paramilitary forces detained, tortured or killed hundreds of Sunni Arab civilians fleeing IS-held areas during the operation to retake the Sunni city of Fallujah, west of Baghdad, earlier this year.

The Iraqi government has denied any systematic violations by security forces or the militias, and says individuals have been held accountable for occasional abuses.