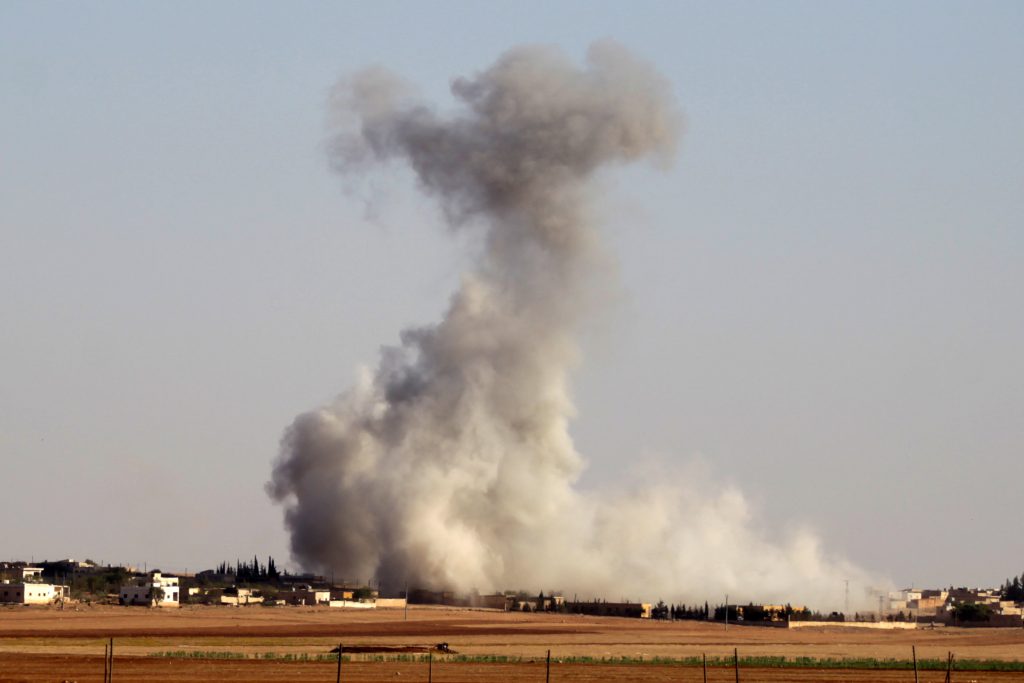 Russian and Syrian warplanes halted their airstrikes on Syria’s besieged city of Aleppo on Tuesday in preparation for a temporary pause in the military push that Moscow has announced for later in the week, the Russian defense minister said.

According to Defense Minister Sergei Shoigu, the halt in the strikes should help pave way for terrorists to leave the eastern rebel-held parts of the contested city.

Both Russian and Syrian air raids on the northern city of Aleppo were suspended at 10 a.m. Tuesday, Shoigu said. He described the suspension as a precursor for the opening of humanitarian corridors.

Moscow on Monday announced a “humanitarian pause” between 8 a.m. and 4 p.m. Thursday to allow civilians and terrorists safe passage out of the city.

At that time, Russian and Syrian militaries will halt any offensive actions. Syrian rebels, including al-Qaida terrorists, as well as the wounded and the sick will be allowed to leave to the neighboring rebel-held province of Idlib.

“The early halting of airstrikes is necessary to declare a ‘humanitarian pause’,” Shoigu said in a statement. “It will … guarantee a safe exit of civilians through six corridors and prepare for the evacuation of the ill and the wounded from the eastern part of Aleppo.”

Russian President Vladimir Putin’s spokesman, Dmitry Peskov, said the halt in the airstrikes was a goodwill gesture to pave the way for Thursday’s pause. “The Russian military is offering yet another chance, and we hope that our partners will allow us all to take advantage of that,” Peskov said.

The United Nations said Russia has communicated plans for two eight-hour cease-fires in rebel-held parts of Aleppo over “consecutive days” this week.

Spokesman Jens Laerke of U.N. humanitarian coordinator OCHA said in Geneva the agency needs assurances from all sides that fighting will stop before it can provide humanitarian assistance to the city.

Moscow made no mention of such a pause on Friday. The reasons for such a discrepancy were not immediately clear, and Laerke specified that it would be up to Russia to elaborate its plans.

Laerke said the U.N. was not told in advance of the Russian announcement.

In Germany, Chancellor Angela Merkel said sanctions against Russia over its actions in Syria should remain an option.

Merkel said she and France’s President Francois Hollande will discuss Syria with Putin on the sidelines of a planned meeting on Ukraine in Berlin on Wednesday, but cautioned against expecting “miracles.”

Both leaders have been sharply critical of Russia’s support for the forces of Syrian President Bashar Assad.

Aleppo, Syria’s largest city and once its commercial hub, has been subjected to the most intense aerial bombardment since the start of the Mideast country’s conflict in 2011. In recent months, the Syrian army has pressed its offensive into the rebel-held eastern part of the city. Air raids have killed hundreds and caused international outrage.

A Russia-U.S.-brokered ceasefire collapsed last month as the Syrian army launched an offensive on eastern Aleppo under the cover of Russian warplanes.

But as the airstrikes stopped on the city, they continued as usual against nearby rebel-held villages including Anadan and Daret Azzeh. Syrian activists had no immediate word on casualties.

In Moscow, Shoigu added that Russia is “asking the countries wielding influence with the (Syrian) rebels … to persuade their leaders to end fighting and leave the city.”

He said the Syrian troops will pull back to distances allowing unimpeded exit for those carrying weapons via two corridors, including the main artery of Castello Road.

The Russian initiative also should boost talks between military experts from several nations that are set to open in Geneva on Wednesday, he added.

“Their work will be aimed first of all at separating the ‘moderate opposition’ from the terrorists and its withdrawal from the eastern part of Aleppo,” he said.

During a meeting over the weekend co-chaired by Russian Foreign Minister Sergey Lavrov and U.S. Secretary of State John Kerry, foreign ministers from Saudi Arabia, Turkey and Qatar said they would work to separate moderate opposition groups in Aleppo from Syria’s former al-Qaida affiliate once known as the Nusra Front.

Russian and Syrian officials have since embraced a proposal made earlier this month by the U.N. Syria envoy, Staffan de Mistura, to allow al-Qaida-linked militants to leave Aleppo in exchange for a truce and a local administration for the eastern districts. Rebels there, along with many residents, have rejected the offer.

Russia’s announcement did not include any promises of an extended cease-fire or local administration in and around Aleppo.

U.S. State Department spokesman Mark Toner, speaking to reporters in Washington on Monday, said the Russian-Syrian pause planned on Thursday was “a bit too little, too late.”

Peskov, Putin’s spokesman, would not say if the strikes would resume after the pause, saying that depends on whether the rebels can be persuaded to cut ties with terrorists.