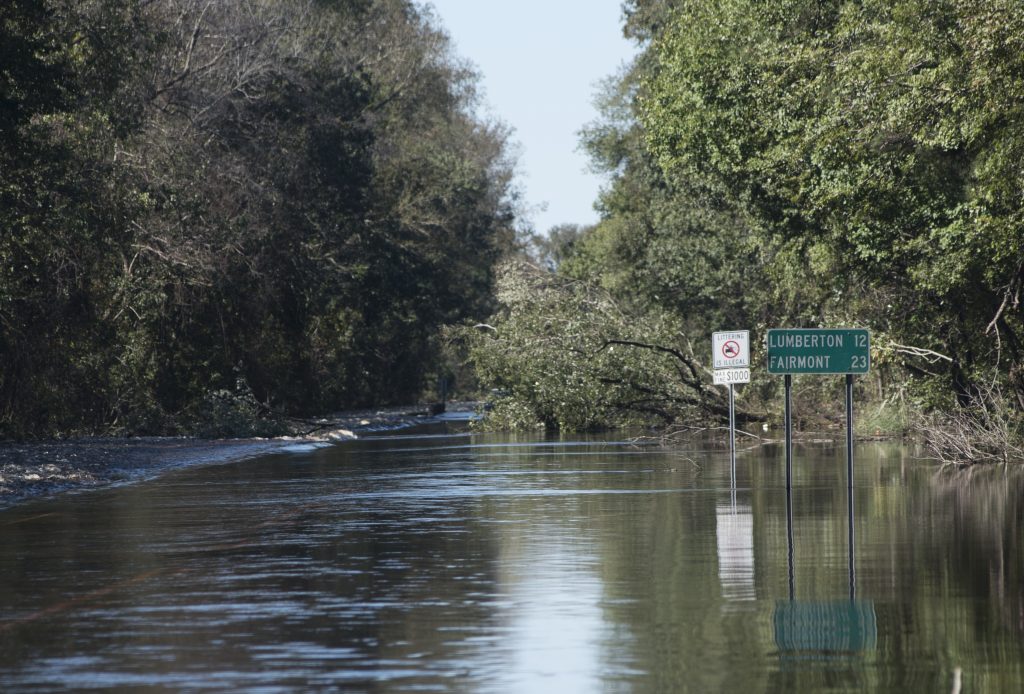 The lingering impact of Hurricane Matthew became clearer to North Carolina officials Monday, when a levee broke overnight in the eastern North Carolina town of Lumberton, forcing the emergency evacuation of nearly 1,500 people left stranded by the rising waters.

The flooding there had not been predicted by computer models, adding to the growing fears of state officials, who say 500 water-retaining structures in the state are feeling the impact of Hurricane Matthew.

“People (in Lumberton) awoke to water,” said Gov. Pat McCrory in a Monday morning press conference. “We are rescuing people off roofs. … We have 1,500 people in danger and flood rapids are rising.”

Ten people have died so far in the state due to the hurricane, another five are missing and 1,400 have been rescued, including a 63-year-old woman who clung to a tree for three hours Sunday after floodwaters swept her car into a canal in Wilson. More than a million people were without power Monday morning, which state officials said equals about 10 percent of North Carolina’s population.

High water will continue to be a problem for much of the week, creating a situation dire enough that McCrory is advising out of state travelers to avoid using Interstate 95, one of the nation’s chief north-south travel corridors. The interstate was “washed off” in multiple locations from Exit 77 to the South Carolina state line, and the stretch of Interstate 40 in the Newton Grove area is also closed.

State officials say travelers who try using Interstate 95 could face lengthy delays, with priority being given to people escaping flood waters in places like Lumberton, where boat and helicopter crews are fishing people out of knee-deep water.

McCrory said the state is poised for even more flooding along the Tar, Cape Fear, Neuse and Lumber rivers in eastern North Carolina. The dangers there go beyond drowning, McCrory said, noting the waters are poisonous, including sewage, chemicals and dead animals that were caught up in the floods.

“The greatest threat at this point remains inland flooding that will continue this week in both the central and eastern parts of the state,” he said. “People who live near rivers, streams and levees need to be extremely careful.”

State officials say four of the five missing people in the state are Cumberland County residents, and the fifth is from Johnston County. Most of the 10 deaths reported so far were related to vehicles that tried to traverse flooded roadways, the latest of which occurred late Saturday in Johnston County when a 19-year-old woman’s car was swept away in flood waters on I-95. Her body was recovered about 5 a.m. Sunday, reports WRAL in Raleigh.

“I cannot stress enough,” McCrory said, “if you see road flooding, do not drive into the waters … This is a life and death decision you are making not just for yourself, but for the rescue personnel called on to save your life.”

To date, about 2,600 people in the state have spent nights in 60 emergency shelters, state officials said. Thirty-eight school districts remained closed Monday, due in part to school sites being used as emergency shelters.

The after-effects of Hurricane Matthew will be felt for the rest of the week, state officials warn, as eastern North Carolina communities brace for downstream flooding. Some of the worst flooding so far is in Cumberland County, home to Fort Bragg. State officials are warning the public to stay out of Fayetteville’s downtown area, due to evacuation and rescue efforts.

Matthew dumped nearly 17 inches of rain in some areas of the state. The Sandhills, which was still recovering from flooding rains from a week earlier, was among the hardest hit areas of the state. Nearly 15 inches of rain fell at Fayetteville Regional Airport, and numerous roads remain blocked by water or fallen trees. Nearly 700 people have been rescued from the flood waters in Cumberland County alone, officials said.

Smaller creeks and rivers, including Crabtree Creek in Raleigh, have crested, but larger rivers are still rising downstream. The Neuse River is expected to hit record levels at Smithfield and Goldsboro sometime Monday, and the North East Cape Fear River isn’t expected to crest near Chinquapin until Wednesday.