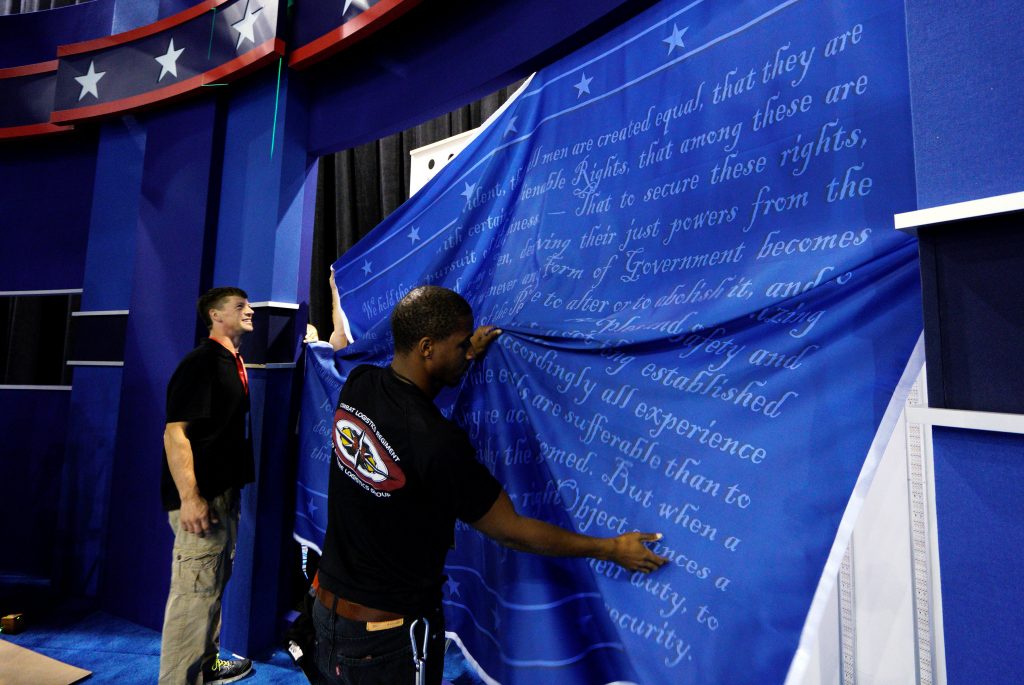 Damaged but defiant, Donald Trump is limping toward a critical presidential debate against Hillary Clinton, absent the backing of a growing group of Republican leaders. Trump insists he will “never” abandon his White House bid despite calls for him to step aside following the release of inappropriate comments caught on video.

Trump’s task in Sunday’s face-off is enormous, and perhaps insurmountable. Even before the recording of his remarks was made public, the businessman was lagging behind Clinton after an undisciplined first debate and struggling to overcome deep skepticism about his temperament and qualifications to be commander in chief.

Ohio Republican Party Chairman Matt Borges said that for Trump, “the debate is now everything.”

Outside Trump’s small cadre of advisers, support for the businessman was scarce following Friday’s release of the 2005 offensive videotape. In an extraordinary rebuke, Trump’s own running mate, Indiana Gov. Mike Pence, declared he could neither condone nor defend the remarks.

“We pray for his family,” Pence said in a statement after canceling a Wisconsin appearance scheduled with House Speaker Paul Ryan and the Republican National Committee chairman, Reince Priebus, both of whom had condemned Trump’s remarks but stopped short of withdrawing support altogether.

Several other Republicans did take the extraordinary step of revoking support for their party’s nominee one month from Election Day and with early voting already underway in some key states. Among them were Ohio Sen. Rob Portman, New Hampshire Sen. Kelly Ayotte — both are running for re-election — and the party’s 2008 nominee, Arizona Sen. John McCain, who had stood by Trump even after the billionaire questioned whether the former POW should be considered a war hero because he got “captured.”

McCain, who is also facing a challenge in November, said Trump’s behavior made it “impossible to continue to offer even conditional support for his candidacy.”

Many went further and called on Trump to quit the race altogether.

Republican leaders have scheduled a Monday morning conference call for House GOP lawmakers, who are out of town for Congress’s election recess. The e-mail obtained by The Associated Press doesn’t specify the topic for the 11 a.m. EDT call, but rank-and-file lawmakers believe it’s about Trump. Such calls are rare and usually held to discuss important matters.

Trump, who spent Saturday hunkered down in his New York skyscraper, posted that he would not yield the GOP nomination under any circumstances. Indeed, many Trump voters remained loyal to the political outsider.

While still publicly backing Trump, the Republican National Committee is considering how to move forward.

One possibility could be redirecting its expansive political operation away from Trump and toward helping vulnerable Senate and House candidates. Such a move would leave Trump with virtually no political infrastructure in swing states to identify his supporters and ensure they vote.