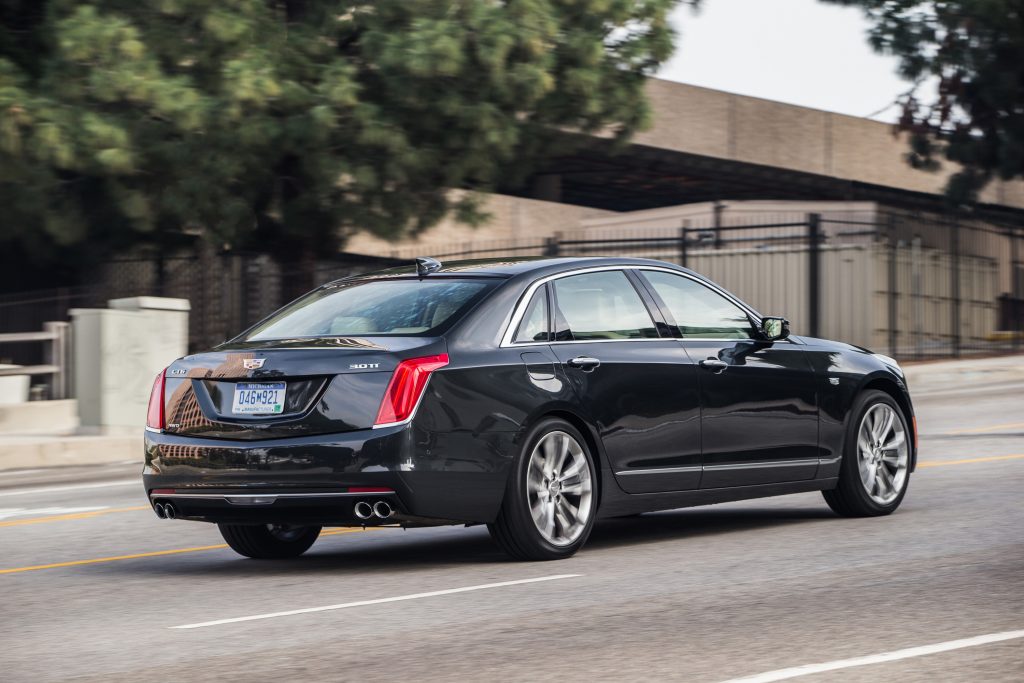 Cadillac has nailed it.

Especially perks. Despite the many pleasures of driving this car, the real action is in the back seat. This is a car to be driven in, as much as a car to drive.

Cadillac has been undergoing a years-long campaign to rebrand itself and escape its land yacht legacy.

Vehicles such as the CTS, DTS, ATS and XTS sports sedans have been an attempt to forget the Deville, Eldorado and Seville cruisers on which the 100-year-old Detroit company built its fortune.

The CT6, which debuted last year as Cadillac’s top-of-the-line luxury sedan, pushes that to a new level.

On the road, the CT6 drives smaller than it looks, and smaller than it weighs. (Cadillac says it’s 1,000 pounds lighter than a comparably equipped Mercedes-Benz S-class, and lighter than its own mid-sized CTS.) The nonadjustable suspension feels dialed somewhere between “comfort” and “sport” — firm but not stiff — which means cornering is confident but comes with a little roll in tight spots.

Cornering is also assisted by a four-wheel steering system, which increases maneuverability. This system was designed specifically for the CT6.

It’s sportier with the drive mode turned from Normal to Sport — though the bigger sound that accompanies this setting may be more due to “engine sound enhancement” than actual engine noise — and despite a bit of turbo lag it knows what to do with a passing lane. (A third driving mode, Snow and Ice, seemed unsuited for summer Southern California motoring.)

Also helpful in that regard is a very good adaptive cruise control system, which powers the car up or down in traffic, gently and gracefully.

The front seats are a wonder of modern transportation technology — adjustable 20 ways, heated, ventilated, with massage functions and clad in a glorious “semi-aniline” leather that must be sorely missed by the animal that once wore it.

A four-zone climate control system cooled the interior air nicely on a 107-degree midday drive, augmented by an onboard air ionizer and a 34-speaker Panaray sound system.

But the truly platinum-level CT6 Platinum experience isn’t in the driver’s seat at all. It’s in the rear passenger compartment.

The real estate here is vast. The massive seats (two, with a flip-up center console that can become a narrow third back seat and also functions as a pass-through to the huge trunk space) are as capacious and comfortable as first-class airline seats.

They recline. They adjust. They’re heated and cooled. They offer a surfeit of legroom and headroom. They seem designed more for a limousine or town car than a four-door sedan.

The sense of personal space and privacy increases with push-button side and rear sunshades. At a click, iPad-sized entertainment screens rise from the seat backs and connect to wireless headphones, then retract when not needed. The center console has plug-ins for phones, laptops or game consoles.

But Cadillac is betting you won’t need that. The CT6 offers optional state-of-the-art wi-fi and HDMI-enabled connectivity. Apple CarPlay and Android Auto are standard.

It’s an environment that suggests you’re going to an awards show, or about to hold a board meeting, or claim diplomatic immunity. You can also deploy the twin-section sunroof for parading.

With all this performance, comfort and top-drawer technology, Cadillac is inviting comparisons with German and Japanese luxury cars. Cross shoppers could be looking at equivalent Audi, BMW, Lexus and Mercedes-Benz sedans. And at this price point, they could even be looking at the Tesla Model S.

But are they American buyers, or Chinese? Much was made at the time of the 2016 CT6’s debut of the vast back seat real estate. It was assumed this prestige acreage was meant to attract Chinese luxury car buyers, who tend to favor cars in which they are driven over cars they drive themselves.

Cadillac President Johan de Nysschen said at the unveiling of the Escala concept car at this year’s Pebble Beach, Calif., car show that his company was determined to return to “the pinnacle of premium.” The XT5 SUV and this CT6 were, he said, “the first salvos in a product offensive.”

At the time, De Nysschen described the Escala as “a chauffeur-driven Cadillac you would want to drive yourself.”

He could have been talking about the CT6.

Highs: A maximum of power and perks

Lows: Not good enough to beat the competition