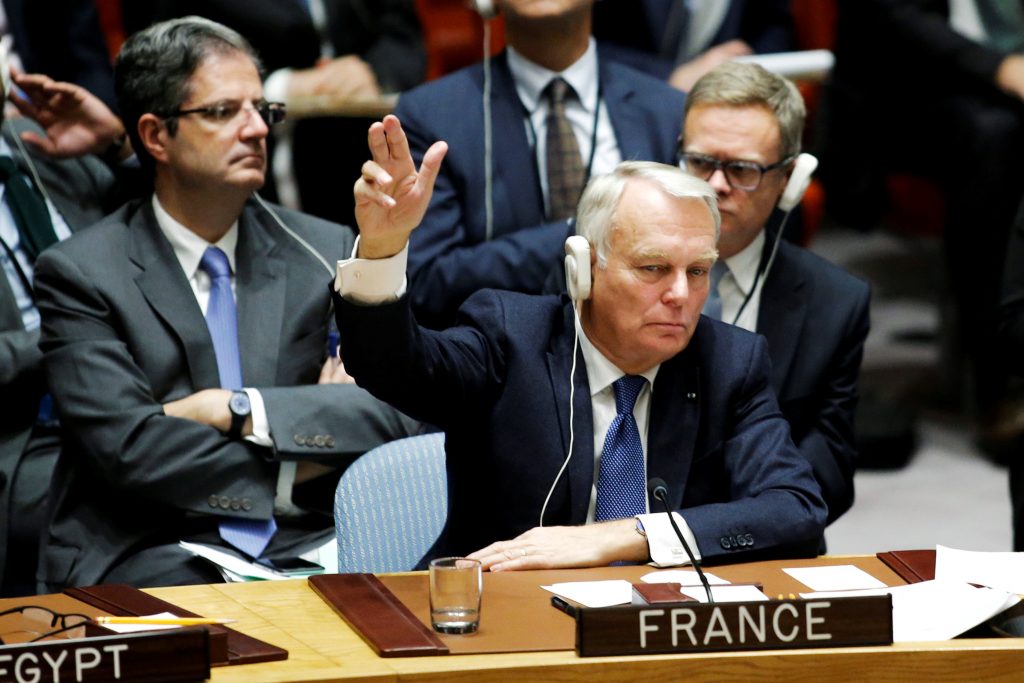 Russia vetoed a French-drafted U.N. Security Council resolution on Saturday that would have demanded an end to airstrikes and military flights over Syria’s city of Aleppo, while a rival Russian draft text failed to get a minimum nine votes in favor.

Moscow’s text was effectively the French draft with Russian amendments. It removed the demand for an end to airstrikes on Aleppo and put the focus back on a failed Sept. 9 U.S./Russia ceasefire deal, which was annexed to the draft.

British U.N. Ambassador Matthew Rycroft said ahead of the vote it would be a “bad day for Russia, but an even worse day for the people of Aleppo, because for as long as there is no council unity, there will be no end to this war.”

Syrian President Bashar al-Assad’s forces, backed by Russian warplanes and Iranian support, have been battling to capture eastern Aleppo, the rebel-held half of Syria’s largest city, where more than 250,000 civilians are trapped.

“Russia has become one of the chief purveyors of terror in Aleppo, using tactics more commonly associated with thugs than governments,” U.S. Deputy Ambassador to the United Nations David Pressman told the council.

He said Russia was “intent on allowing the killing to continue and, indeed, participating in carrying it out,” and that what was needed from Moscow was “less talk and more action from them to stop the slaughter.”

A U.N. resolution needs nine votes in favor and no vetoes to be adopted. The veto powers are the United States, France, Britain, Russia and China. The Russian text only received four votes in favor, so a veto was not needed to block it.

The French draft received 11 votes in favor, while China and Angola abstained. Venezuela joined Russia in voting against it.

It was the fifth time Russia has used its veto on a U.N. resolution on Syria during the more than five-year conflict.

The previous four times China backed Moscow in protecting the Syrian government from council action, including vetoing a bid to refer the situation in Syria to the International Criminal Court.

Russia’s U.N. Ambassador Vitaly Churkin, president of the council for October, described the dual votes on Saturday as one of the “strangest spectacles in the history of the Security Council.”

“Given that the crisis in Syria is at a critical stage, when it is particularly important that there be a coordination of the political efforts of the international community, this waste of time is inadmissible,” Churkin told the council.

Russia only gained the support of China, Venezuela and Egypt for its draft resolution. Angola and Uruguay abstained, while the remaining nine council members voted against.

Both the French and Russian U.N. draft resolutions called for a truce and humanitarian aid access throughout Syria.

“If we don’t so something, this town [Aleppo] will soon just be in ruins and will remain in history as a town in which the inhabitants were abandoned to their executioners,” French Foreign Minister Jean-Marc Ayrault said. “If the international community does not wake up it will share the responsibility.”

The Security Council negotiated for a week on the text drafted by France. The vote was called after Ayrault visited Moscow on Thursday and Washington on Friday to discuss the resolution.Russia circulated its own draft on Friday and said it would be put to a vote immediately after the French draft.

A crackdown by Assad on pro-democracy protesters in 2011 sparked a civil war and Islamic State militants have used the chaos to seize territory in Syria and Iraq. Half of Syria’s 22 million people have been uprooted and more than 400,000 killed.