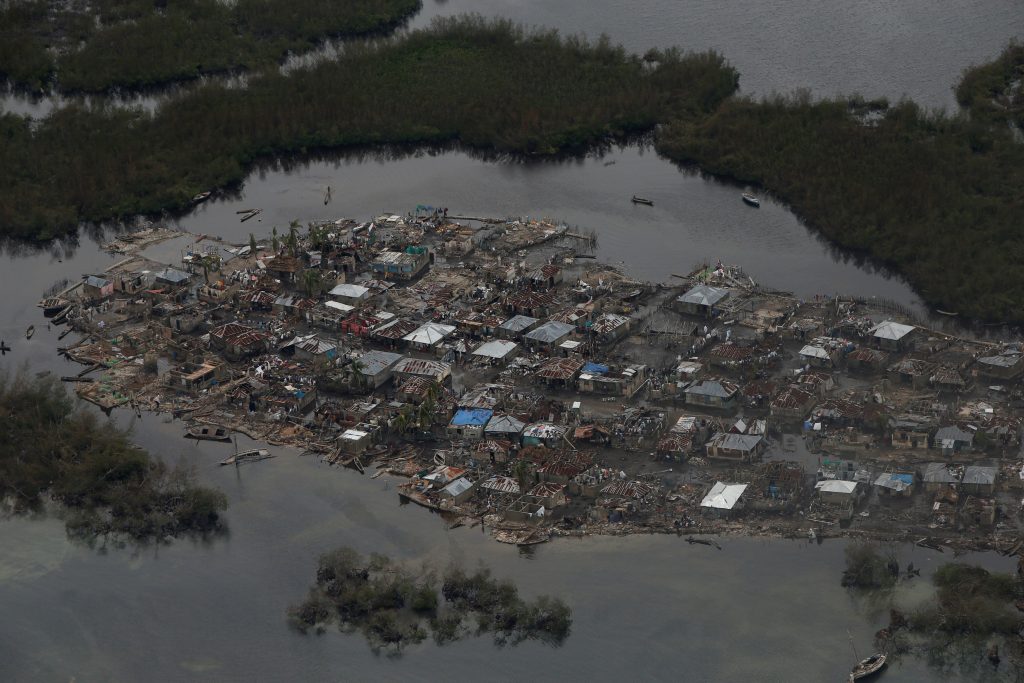 Like other Americans, Donald Trump and Hillary Clinton are steering clear of battleground Florida, where Hurricane Matthew threatened to wreak havoc on the final stretch of presidential campaigning.

The campaigns rushed Thursday to move staff and volunteers, close offices and cancel events in the path of the storm. And as many Floridians heeded calls to evacuate, both candidates began the delicate and difficult task of pursuing votes during a crisis.

“Even if you want to do politics, no one is there to listen,” said Steve Schale, a Democratic consultant who directed or advised Barack Obama’s campaigns in the state in 2008 and 2012.

“Please know that we are praying for you and everyone in the path,” Trump said Thursday night at a town hall event in New Hampshire. “You’ve got to take care of yourself, you’ve got to get out of the area, you’ve got to listen.”

The hurricane is expected to hit Trump’s prized Mar-a-Lago resort in Palm Beach. Campaign spokeswoman Hope Hicks said Trump had spoken with employees to ensure they are safe and are following instructions from local officials.

Clinton, who was speaking at fund-raisers in New York, wrote: “Hurricane Matthew is a major storm. … Stay safe, Florida.”

Both stayed far away, preparing for their second debate, a town hall-style faceoff on Sunday in St. Louis.

Along the Southeast coast, Matthew was expected to bring dangerous conditions to Georgia, South Carolina and, possibly, North Carolina. But it was the impact on vote-rich Florida, a must-win state for Trump, that had the campaigns on high alert. The hurricane closed in just as both sides ramped up their early-vote push and just days before a voter registration deadline.

Vote-by-mail ballots are being sent to voters across the state this week, leaving the potential for ballots to arrive just as voters temporarily abandon their homes. So far, a record 2.5 million people — nearly one-third of those who voted in 2012 — have made requests for the early ballots.

Scott said Thursday evening that he would not consider extending the Oct. 11 voter registration deadline.

“Everyone has had a lot of time to register,” Scott said, adding, “I don’t intend to make any changes.”

Scott, a Republican, is a strong supporter of Trump and chairman of a super PAC running Clinton-bashing media ads.

Officials said they were hoping that any disruption to voting would be less severe than with Superstorm Sandy, which struck New Jersey and New York just before the 2012 presidential election and kept many voters away from polls.

At least half of Florida voters typically cast ballots early, either by mail or in person, compared with just a fraction in New York and New Jersey. Still, disruptions in Florida campaigning were immediate.

“There is no good time, but this is just the worst time,” Barnett said. “Whatever happens, I think we can make up for the lost time, as long as we are not cleaning ourselves out from under a catastrophic mess.”

Democrats, too, prepared for high-power campaigning to grind to a halt in affected areas. Media advertising often fails to reach voters preoccupied by an impending storm and the aftermath.

How and where to advertise became an immediate flashpoint between the campaigns. After Clinton ads were spotted on the Weather Channel, the Trump campaign accused her of a “tone deaf” attempt to capitalize on the situation.

A Clinton spokesman said ads had been scheduled on local Weather Channel stations in Florida and other states. But the storm’s potential severity prompted the campaign to cancel the Florida portion.

The storm posed unusual challenges and opportunities for the candidates, particularly Trump, who is trying to prove his leadership.

In the aftermath of the flooding in Louisiana earlier this year, Trump and his running mate, Mike Pence, rushed to the Baton Rouge area to tour the damage. During the trip, Trump criticized the president and later Clinton for failing to do the same, despite request from local officials for them to steer clear of the area.