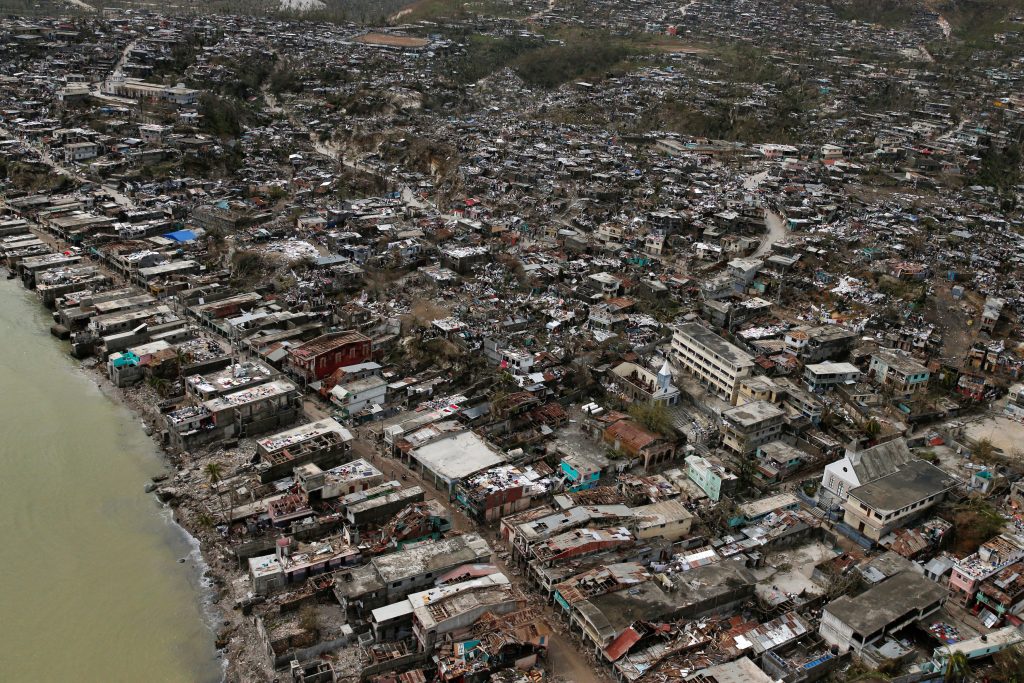 Two days after the hurricane slammed into the Western Hemisphere’s poorest nation with winds reaching 145 miles per hour, thousands of Haitians remained without power, communications or clean water. Aid groups warned that cholera could spread quickly, adding to the humanitarian crisis.

According to a Ministry of Interior spreadsheet available at a hurricane response coordinating meeting at the United Nations compound in Les Cayes, there have been at least 299 deaths just in parts of southern Haiti. Haiti’s interior minister, François Anick Joseph, had earlier said at least 108 deaths were caused by the storm. At least four more deaths were reported in the neighboring Dominican Republic.

The town with the highest death toll on the document was Chantal, with 106 deaths, followed by Les Anglais, with 85. More than 35,000 people had taken refuge in shelters in the south, according to the document. Other towns that were reportedly hard hit and so far had little outside access, such as Jeremie, on the north side of the southern penninsula, had yet to be counted.

“That’s just the south, and that’s just what they know about,” said Conor Shapiro,35, who runs the St. Boniface hospital in Fond des Blancs, which is the largest hospital on the southern peninsula.

Shapiro said that very few patients had been able to access his hospital since the storm, because roads are blocked and a key bridge washed out. He hoped to see more of an international rescue effort soon.

“Maybe the surge will come,” he said. “But this feels like a forgotten disaster.”

The hurricane, the most powerful Caribbean storm in nearly a decade, took aim at Florida on Thursday after carving a punishing path through the region, also striking Cuba and the Bahamas.

A helicopter tour Thursday of Les Cayes, a port city on Haiti’s southwestern coast, showed extensive damage, with cinder-block buildings knocked to the ground and metal roofs peeled back like tin can lids. Everywhere, trees were flattened, and the main river that runs through town was swollen to the top of its banks and running the color of milk chocolate.

Aid workers rushing to the scene to assess the damage feared that some towns were still cut off from the outside world, since bridges have been swept away and trees have fallen across rural roads. Thousands of people have been displaced.

“Flying over, we were able to see quite a lot of destruction. Storm surges, downed trees, crop damage, farm damage,” said Margaret Traub, head of global initiatives for International Medical Corps, who landed in Les Cayes with two colleagues and a journalist Thursday afternoon. “If I had to estimate, I would say at least 80 percent of buildings saw damage. Many of them were destroyed.”

Meanwhile, other alarming signs were emerging.

At least three cases of cholera were reported in Jeremie, on the tip of Haiti’s southwestern peninsula, said Holly Frew, a spokeswoman for the aid group CARE in the Haitian capital, Port-au-Prince. At a central hospital in Les Cayes, two people with cholera had shown up Thursday, but the hospital staff didn’t have the intravenous fluids or antibiotics to treat the disease.

Cholera, a potentially deadly disease spread by contaminated water, is a main concern for relief agencies struggling with how to bring clean water and emergency sanitation systems to areas now accessible only by air.

“This is a very great danger for the city,” said Tony Guillaume, an orthopedic surgeon in the hospital in Les Cayes. “They can contaminate others.”

Only one nurse was available to treat the crowd that showed up in one of the muddy hospital waiting rooms. Some sat waiting with broken limbs. A young man vomited on the floor. Some residents had cuts from metal roofing that blew off in the storm and sliced into people.

Doctors said they hoped to soon reopen the cholera ward, which had closed before the storm swept in, dumping waist-high water around the hospital.

Aerial images provided by the U.S. Coast Guard showed scenes of near-total damage in some areas: wooden homes now just scattered timbers, roofs sheared off and palm groves leveled by the Category 4 storm. In some areas of Haiti, people have been living in makeshift structures since a major earthquake six years ago that killed 200,000 people.

Haitian officials said 38 of the hurricane deaths occurred in the department of Grand Anse in the southwest of the country, which was especially hard hit.

About 80 percent of the buildings were destroyed in Jeremie, said Frew, the CARE spokeswoman.

The U.N. deputy special representative for Haiti, Mourad Wahba, has described the hurricane as the country’s worst humanitarian crisis since the earthquake in 2010.

Matthew slammed eastern Cuba before churning Thursday over the Bahamas, where residents were urged to move to high ground and the capital, Nassau, was battened down for the strongest hurricane in the Caribbean since Felix struck in 2007.

In Les Cayes, white United Nations trucks drove through the streets Thursday afternoon carrying heavy machinery, such as bulldozers and earthmovers, to serve the rescue and rebuilding efforts. Residents were out clearing away debris and beginning their repairs. Many roads were flooded, but some main thoroughfares were passable.

Across the hurricane-hit region, many Haitians sought shelter in schools where votes were meant to be cast on Sunday. Haiti’s electoral council on Wednesday postponed a presidential election that has already been delayed several times. Authorities said the situation would be evaluated over the next week before a new date was announced.

The U.S. Navy has sent three ships to Haiti, including an aircraft carrier and a hospital ship. About 300 Marines were aboard the USS Mesa Verde, an amphibious transport vessel.

The Haitian Embassy in Washington, D.C., described the next few days as “critical to the recovery process” and urged governments, organizations and private individuals to coordinate their aid efforts to avoid overlap and waste.

“It is expected that many will want to engage and take initiatives toward recovery and relief efforts,” the statement said. “The state of Haiti strongly encourages all individuals who are in the process of organizing specific responses and action plans, to work with the local organizations and institutions in Haiti.”