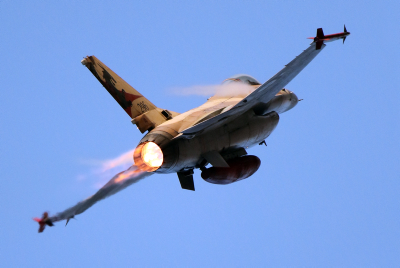 Major Ohad Cohen-Nov is the Israel Air Force pilot who was killed when he ejected from his fighter jet Wednesday evening when a fire broke out on board. Cohen-Nov was landing the plane at the Ramon Air Base when the he was forced to eject. He and a navigator, who was injured when he ejected as well, were returning from attacking Hamas terror targets in Gaza.

Cohen-Nov, 34, was married, with one daughter. Originally from Moshav Mazor in central Israel, Cohen-Nov and his family lived in an officer’s community adjacent to the air base. His father, Doron Cohen-Nov, was also a fighter pilot and later went on to a famed career as an El Al pilot.

Details of the levayah were not immediately available.

Cohen-Nov had recently completed a course for piloting F-16 planes, and was considered an experienced and skilled pilot. He undertook numerous missions, including the ill-fated one on Wednesday, in which Israel struck back against Hamas terror targets after a Kassam rocket exploded in a neighborhood of Sderot.

An investigation into the incident was ordered by Air Force Commander Amir Eshel, but no immediate cause for the fire was detected. Investigators are checking both the navigation and weapons systems to determine if an electrical short was the cause.

According to the navigator, Cohen-Nov may have been killed because he tried to eject himself a moment too late – because he was trying to save the plane.