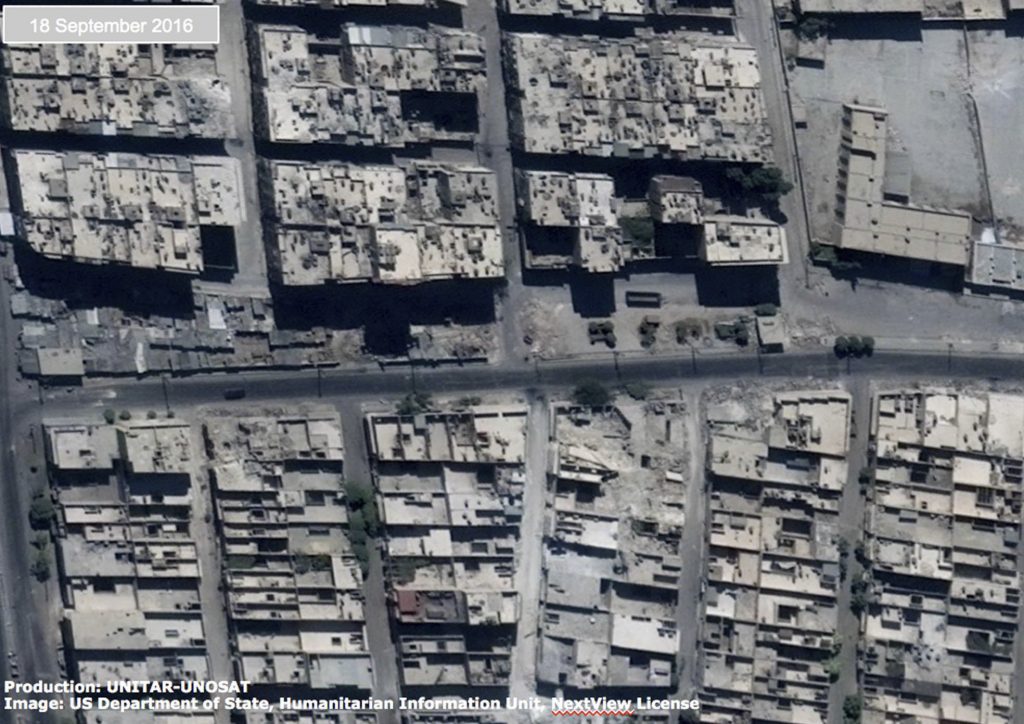 The U.N. on Wednesday released stark satellite images showing the most recent destruction of Syria’s embattled northern city of Aleppo, pounded by Syrian and Russian airstrikes since the collapse of a U.S.-Russia brokered ceasefire two weeks ago.

The release coincides with a stepped-up offensive by Syrian pro-government forces that are attacking the city from the south in a bid to penetrate its opposition-controlled areas, where the U.N. estimates 275,000 people are trapped in a government siege.

In Geneva, an official with the U.N.’s satellite imagery program said the new pictures from the rebel-held areas in the eastern half of the city show much destruction, presumably caused by airstrikes.

“Since the ceasefire has broken down, you certainly see an awful lot of new damage or plenty of new damage,” said Lars Bromley, a research adviser at UNOSAT.

The images, from Digital Globe and obtained by the U.N. agency through a licensing arrangement with the U.S. State Department, show mostly “formerly blasted and blown-up areas” during Syria’s 5-½-year war “experiencing a great deal of additional damage,” said Bromley.

“To a certain extent you’re looking at rubble being pushed around,” he told reporters.

The images primarily show before-and-after pictures from mid to late September showing destruction of buildings, including houses, after the short-lived ceasefire broke down. Several images are from northern Aleppo neighborhoods, where government forces have also advanced against rebel fighters battling back.

“Since the ceasefire has broken down, you certainly see an awful lot of new damage or plenty of new damage,” Bromley added. “Remember that the areas that are being bombed have been bombed almost continuously for quite some time. So seeing dramatic images of formerly pristine areas now turned to rubble — you don’t see a lot of that.”

One image, dated Saturday, shows the damage to a school or athletic facility in Aleppo’s Owaija district.

Some of the images had a “signature” that airstrikes had done the damage — a large-size crater.

“Air-dropped munitions are often much larger than anything you would fire on the ground, so a giant crater in the ground is almost certainly an air-dropped munition,” Bromley explained. “Then things like rockets, they will often occur in a row, whereas artillery or mortars will kind of have a different pattern.”

“But there is also a lot of overlap, there is a lot of smaller airdropped bombs that will look almost the same as a mortar or an artillery piece,” he added.

UNOSAT manager Einar Bjorgo added that places like Aleppo, which has long been the focus of Syria’s bitter civil war, now in its sixth year, “are of course complex to analyze because you have a mix of all this.”

The images could also provide significant insight after a controversial attack — such as a deadly attack on a U.N.-backed humanitarian aid convoy west of Aleppo last month.

“With our analysis, we determined that it was an airstrike,” Bromley said. Convoy organizers had obtained necessary clearances from the government, rebels as well as the Americans and Russians, who operated aircraft in Syrian skies.

The top U.S. military officer, Marine Gen. Joseph Dunford, chairman of the Joint Chiefs of Staff, told a Senate committee last week that he believes Russia bombed the convoy and said Syrian and Russian aircraft were in the area at the time. Russia and Syria have denied that they were responsible for the strike.

The U.N. officials also presented images from Iraq that showed plumes of black smoke from burning oil fields about 9 miles south of Mosul that were set aflame as Islamic State retreated to the city.

UNOSAT generally provides images to U.N. agencies, such as the refugee agency UNHCR, which is preparing for an expected exodus from IS-held Mosul after Iraq’s government announced plans to retake the city by the end of this year.

Earlier Wednesday, Turkish military officials said two Syrian opposition fighters and a Turkish soldier were killed in clashes with Islamic State terrorists in northern Syria, southwest of the town of al-Rai. At least 18 IS fighters were also killed, they said.

Separately, a Turkish soldier was killed and three others were slightly wounded in fighting in the opposition-held area of Ziyara, which a group of IS terrorists tried to infiltrate.

Turkey sent troops and tanks into Syria in August to help Syrian rebels re-take IS strongholds near the border.