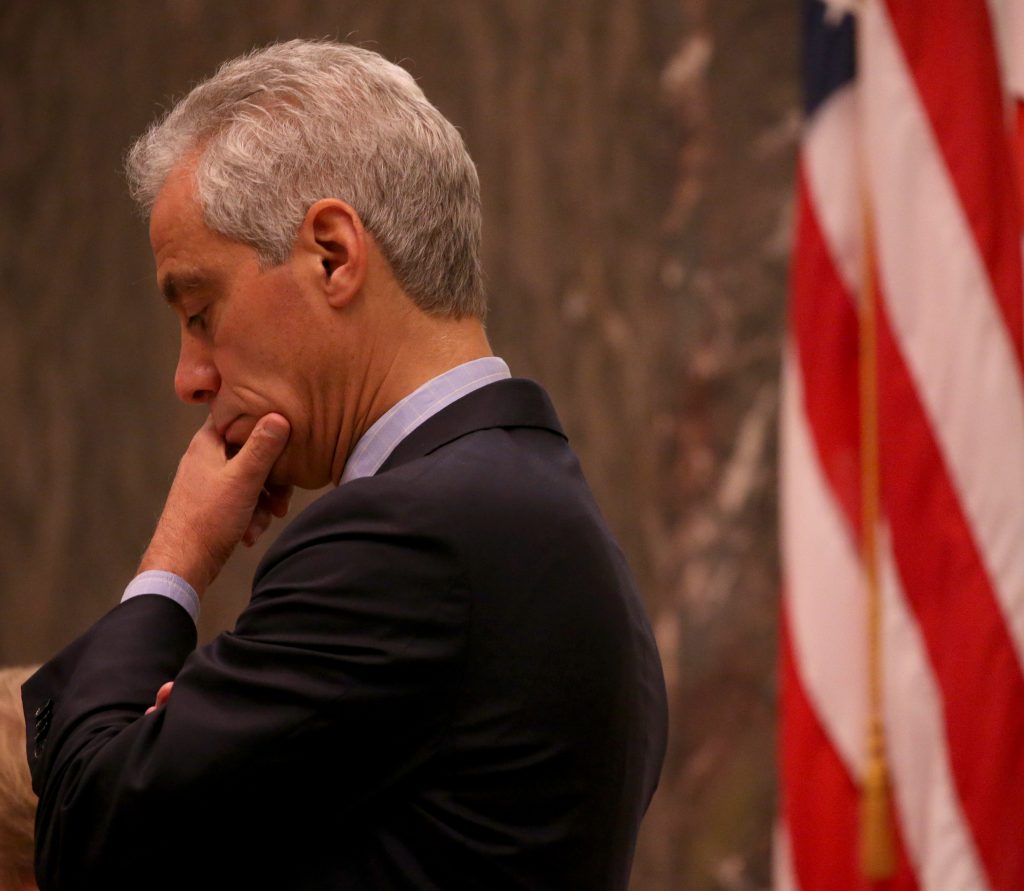 Chicago Mayor Rahm Emanuel won approval Wednesday of the first piece of his plan to revamp the city’s system of investigating police abuse complaints, but not before protesters sent a message that the issue is far from over.

A couple dozen protesters rose and shouted “hold the vote” to signify their call for more community input into the final plan. Police led them from City Council chambers as Emanuel pounded the gavel and Public Safety Committee Chairman Ald. Ariel Reboyras, 30th [Ward], tried to yell his opening statements on the ordinance to be heard over the fracas.

After the delay, aldermen talked about the pros and cons of Emanuel’s ordinance before approving the plan 39–8. The City Council handed the mayor a major victory as he tries to restore trust in the police department amid a sharp rise this year in shootings and murders.

Ald. Walter Burnett Jr., 27th, backed Emanuel’s plan, saying, “We are getting things done here,” before stressing the need to address the problem.

“We live with these things in a whole bunch of different ways in our community,” said Burnett, whose ward includes a swath of the West Side. “We live with it every day. Our whole family has been brutalized by police officers and put in jail unjustly … We’ve been through this stuff. We live with it.”

Under the plan, the much-maligned Independent Police Review Authority will be replaced by the Civilian Office of Police Accountability, or COPA. City Hall also will create a new post of deputy inspector general to monitor both the police department and new oversight agency.

But a new Community Safety Oversight Board won’t come until sometime next year. The panel will play a key role in picking the new police oversight agency’s chief and determine just how independent the new system will be from the mayor’s office.

“This is not the end, this is not a victory,” said Ald. John Arena, 45th. “This is only a first step to try to correct for sins of the past and make sure those sins are not repeated in the future.”

Emanuel said he’s delaying creation of the oversight board at the request of community groups that want more input on how that board is structured. The mayor repeatedly has said he needs to move forward with the rest of the plan because the staff of the current police review authority is dwindling, with workers knowing the agency is being disbanded — and that makes it tough to keep up with the caseload.

The new agency will have greater power to investigate alleged police abuse and the use of deadly force. It also will be able to recommend changes to police policy and procedure. The new watchdog would audit the new police accountability system and identify patterns and practices that violate constitutional rights.

Emanuel initially planned to introduce the plan in June, but the effort was delayed several times as community groups demanded more input. Several more hearings were held, and Emanuel agreed to a series of changes.

Key among those changes was giving the new police investigations agency and the new watchdog a guaranteed minimum funding level so the mayor or council cannot gut its power by reducing its budget.