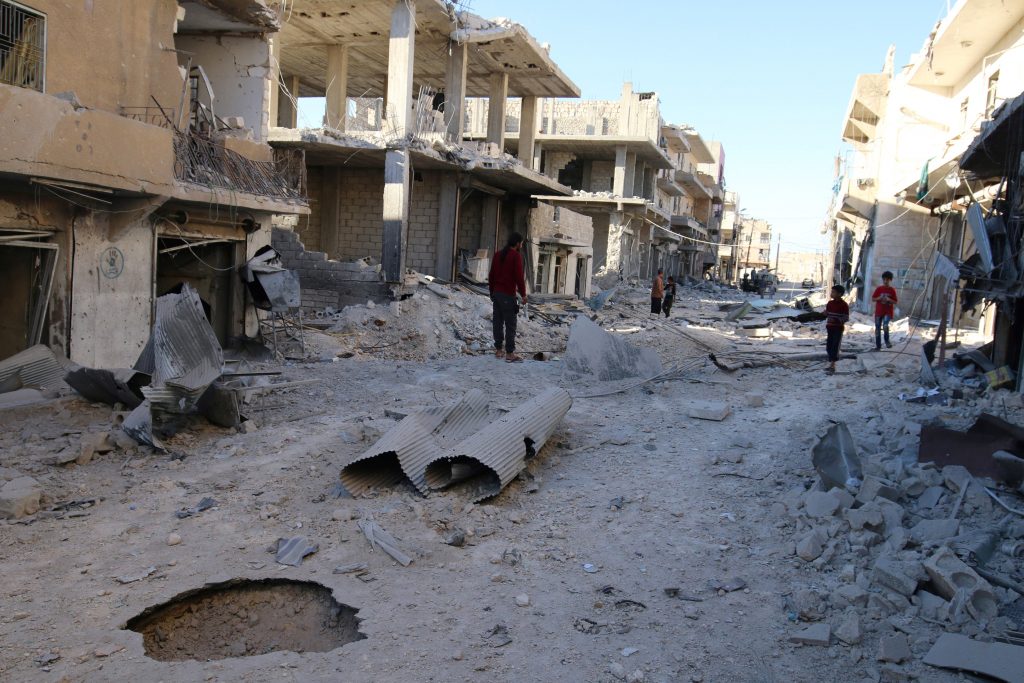 Russian warplanes struck rebel-held areas north of Aleppo on Saturday as the army shelled the besieged Old Quarter in a major offensive, rebels and a monitoring group said.

Russia was reported on Friday to be sending more warplanes to Syria to ramp up its air campaign as the United States said it had not yet given up on finding a diplomatic resolution.

The latest strikes come 10 days into a Russian-backed Syrian government offensive to capture eastern Aleppo and crush the last urban stronghold of a revolt against Syrian President Bashar al-Assad that began in 2011.

Saturday’s airstrikes focused on major supply lines into rebel-held areas – the Castello Road and Malah district – while fighting raged in the Suleiman al Halabi neighborhood, the front line to the north of Aleppo’s Old City.

Rebels led by the main Islamist rebel group Ahrar al-Sham said on Saturday they had regained several areas in the Bustan al-Pasha district seized a day before, a strategic point northwest of the city.

The army, aided by hundreds of Iranian-backed militias who have arrived in Aleppo, has backed up the air campaign with a ground offensive on several front lines to break rebel defenses inside the city.

In a telephone conversation with U.S. Secretary of State John Kerry on Friday, Russian Foreign Minister Sergei Lavrov said Moscow was ready to consider more ways to normalize the situation in Aleppo.

But Lavrov criticized Washington’s failure to separate moderate rebel groups from those the Russians call terrorists, which had allowed forces led by the group formerly known as the Nusra Front to violate the U.S.-Russian truce agreed on Sept. 9.

The United States made clear it would not, at least for now, carry out a threat made on Wednesday to halt the diplomacy if Russia did not take immediate steps to end the violence.

Moscow and Assad spurned the ceasefire to launch the new offensive, potentially the biggest and most decisive battle of the civil war, which is now in its sixth year.

An army source quoted in state media said its forces had made advances, which was denied by rebels who say they had repelled a new assault.

A news commentary by the state-run Ikhbariyah said “high level coordination from the air and ground by Syrian and Russian warplanes” had allowed the two allies to “successfully hit locations where terrorist groups had dug in.”

But rebels say Syrian troops backed by fresh reinforcements from Iranian-backed militias were struggling to make any gains in a ground offensive in a key front line in the Old City.

“They are shelling the Old City heavily after another failed attempt to gain ground. They have lost several fighters and we are steadfast,” said Abu Hamam, a rebel from the Failaq al-Sham group.

The Syrian Observatory for Human Rights, a British-based group that monitors the war, reported heavy bombardment by government forces and “back and forth” fighting in the Suleiman al-Halabi neighborhood.

The monitor said warplanes struck a field hospital in the heavily bombed rebel-held al Sakhour district in the second such strike on one of four such medical facilities targeted in the last few days.

The strike caused at least one death and several injuries and put the hospital out of service, the monitor said.

Hundreds of people have been killed in the bombing and many hundreds more wounded, with little access to treatment in hospitals that lack basic supplies.

The rebel-run body in charge of public utilities in Aleppo said in a statement that pumping of water had stopped in the city after Russian and Syrian warplanes hit a water pumping plant in Hay al Nairab.

Rebels say Moscow and the Syrian army have for months been targeting power plants, hospitals and bakeries to force nearly 250,000 believed to be trapped in the city into surrender.

Washington, Britain and other allies have condemned the Russian bombing campaign, with the U.S envoy to the U.N. last week calling Russia’s actions in Syria “barbarism,” not counterterrorism.

Residents say the airstrikes are unprecedented in their ferocity, deploying heavier bombs that flatten buildings on top of the people huddled inside.

“They strike without stop. Just look at this crater… we have pulled out six bodies and there are still people under the rubble; come and see, they are all civilians,” said Ahmad al Salhi, a rescue worker in Sakhour district.

Russia joined the war exactly a year ago, tipping the balance of power in favor of Assad, who is also supported by Iranian ground forces and Shi’ite militia from Lebanon and Iraq.

The army said it would press its advantage after retaking last Thursday the strategic Handarat camp north of Aleppo that had already changed hands once since the start of the attack.

Rescue workers said at least 34 were killed by sustained Russian and Syrian army strikes and artillery shelling on Friday and into the early hours of Saturday, while state media said rebel mortar attacks on government-held Midan, al Ithaa and other areas in the city had killed at least 20 people.