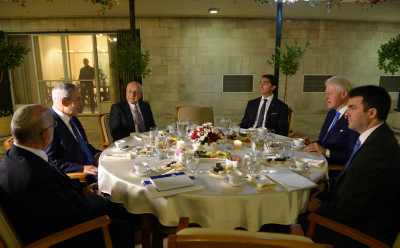 The arrival of dozens of world leaders for the funeral of former President Shimon Peres is an opportunity to remember one of the founders and builders of the modern state of Israel – and it turns out that it is a diplomatic opportunity as well, one that Prime Minister Binyamin Netanyahu is seeking to take full advantage of. On Thursday night, Netanyahu met with EU Foreign Policy chief Federica Mogherini, as well as with former U.S. President Bill Clinton.

Netanyahu discussed with Mogherini the current diplomatic situation in the region, with the EU official stressing that Europe was looking forward to the renewal of talks between Israel and the Palestinian Authority. Those talks are set to take place in the coming weeks in Moscow.

Earlier in the evening, Netanyahu net with Bill Clinton, in a meeting that was more ceremonial than substantive, as Clinton is no longer involved in foreign affairs. However, sources in Netanyahu’s office said that the talks were “serious and conducted in a positive atmosphere,” and that they did touch on important issues.

It’s unlikely that Netanyahu will be able to meet privately with President Barack Obama. Obama landed in Israel Friday morning and was taken directly to Mount Herzl Cemetery, where Peres will be interred. Obama, along with Netanyahu, Clinton, President Reuven Rivlin, and Knesset Speaker Yuli Edelstein, along with family members, will speak at the funeral, after which he will immediately return to the U.S.

Some 20,000 people passed before the coffin of Peres that lied in state in the Knesset Thursday. That, however, was likely to be the last opportunity for ordinary Israelis to be in proximity to the former President. Police are severely limiting access to the funeral site on Mount Herzl cemetery because of the extraordinary security arrangements for the dozens of foreign leaders who will attend the funeral.

Shivah will be sat after the funeral at the Peres Center for Peace in Jaffa. Shivah will begin again after Shabbos, and extend into Sunday afternoon, when family members will get up and prepare for Rosh Hashanah.