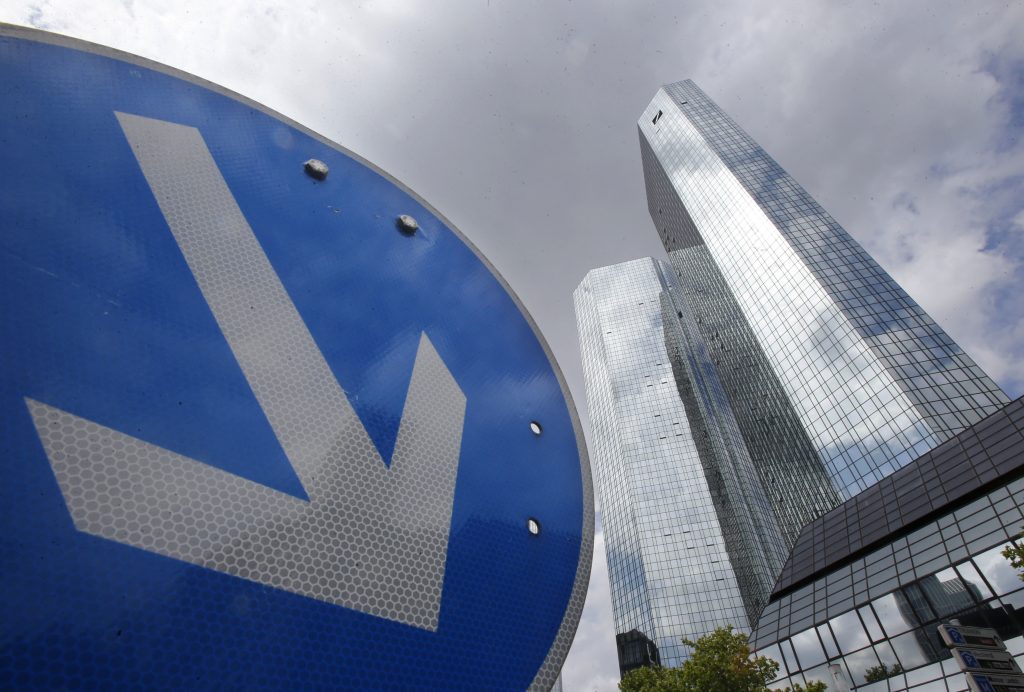 Worries over the financial health of Deutsche Bank returned to the fore Friday, sending shares in Germany’s biggest bank into a tailspin and to a record low.

Reports that hedge funds are moving their business out of the bank were the catalyst to the latest bout of selling. At one moment in frenzied early trading, the bank’s stock fell another 8 percent to below 10 euros a share for the first time, before recovering somewhat to trade 6 percent lower at 10.20 euros.

Deutsche Bank has been at the forefront of investor worries for weeks now, ever since authorities in the United States revealed they are seeking $14 billion from the bank to settle legal claims over its sales of mortgage securities in the run-up to the global financial crisis in 2008.

With the German government giving no sign it is prepared to offer a bailout, if needed, and the bank heavily exposed to risky investments, notably in the derivatives markets, investors have grown increasingly concerned. That worry was relieved only temporarily by Deutsche Bank’s move this week to sell an insurance subsidiary for just over €1 billion ($1.12 billion) in an effort to shore up its capital buffers.

The latest bout of unease over Deutsche Bank stemmed from a report by Bloomberg that about 10 hedge funds had taken measure to reduce their exposure to the bank.

“While these firms represent a fairly small part of the banks’ clients, as a weather vane in the current febrile environment, it doesn’t exactly represent a vote of confidence either,” said Michael Hewson, chief market analyst at CMC Markets.

The wider worry, which has sent stock markets across Europe sharply lower on Friday, is that Deutsche Bank may prove to be a “Lehman moment” for the European banking system. In September 2008, the U.S. government made clear that it was not going to bail out investment bank Lehman Brothers when it was in huge difficulty, a fateful decision that triggered a collapse of confidence in the global banking system and pushed the world economy into its deepest recession since World War II.

“German Chancellor Angela Merkel says there will be no state bailout, but this might be a case of ‘famous last words,’ as the history of banking crises often shows that major banks cannot be allowed to fail for fear of systemic risk affecting the financial system and negatively impacting the real economy,” said Neil MacKinnon, global macro strategist at VTB Capital.

That’s why many experts expect some sort of deal that may see bondholders take a hit or a possible merger of the bank with Commerzbank, which has its own financial problems. The German government is also expected to pressure U.S. authorities to reduce the fine, as it would be in no one’s interest for one of the world’s most systemically important banks to go under.

One major difference from 2008 is that the European Central Bank has a range of tools to shore up liquidity in banks under its jurisdiction, the 19 countries that use the euro. As a result, Deutsche Bank should be able to avoid a funding squeeze and a potential run on deposits.

MacKinnon says that’s not enough, though, and that the European banking sector is likely to remain under stress given the absence of much-needed efforts to restructure and raise money.

“It is insufficient just for the central bank to provide unlimited liquidity,” he said. “As a result, investors need to be mindful of the potential for a market upset in the near term.”

If Friday’s stock market drop is any indication, investors are heeding that advice.