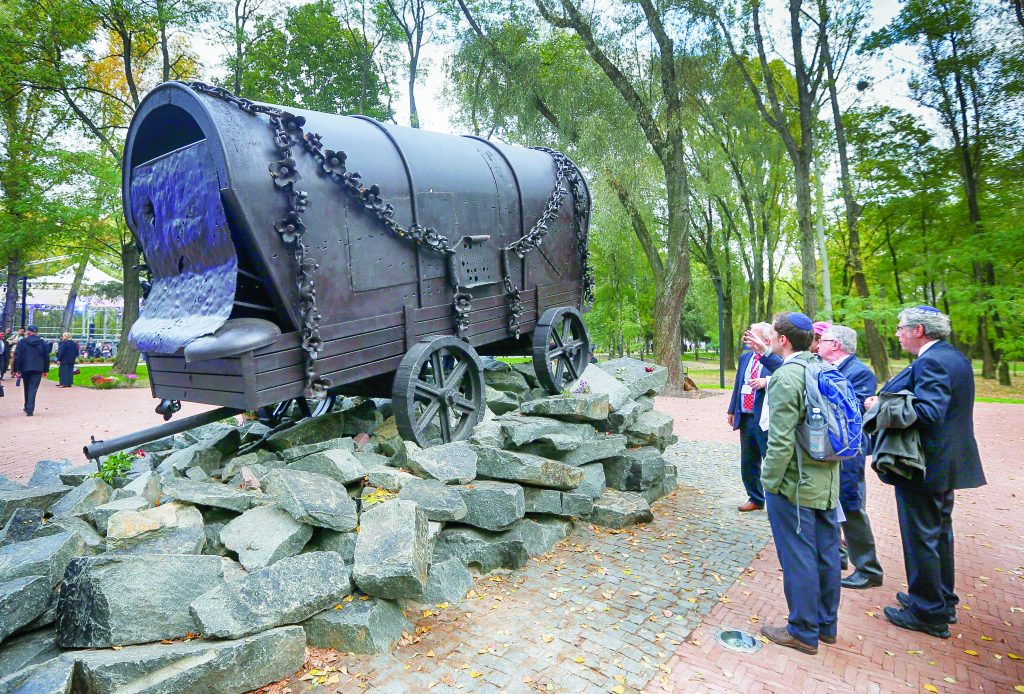 Ukrainians marked the 75th anniversary of the Babi Yar massacre, one of the most notorious mass killings of the Holocaust, in a memorial service attended by President Petro Poroshenko, international delegations and representatives of the Jewish community.

“Holocaust is one of the most tragic pages of not only Jewish history, but of Ukrainian history, too,” Poroshenko declared in his opening remarks, which called for the establishment of a permanent Holocaust memorial in Kiev. “The tragedy of Babi Yar is a warning to all mankind that any regime that despises the rights and freedoms of the person poses a threat to humanity itself.”

U.S. Secretary of Commerce Penny Pritzker spoke of her roots in Ukraine, noting that had her ancestors not decided to flee pogroms in the 19th century, “My family’s remains might be in this ravine.

The official ceremony was attended by 1,500 participants and marked the culmination of a week-long series of memorial events.

Other guests included European Council President Donald Tusk and German President Joachim Gauck. Many of the dignitaries, including Poroshenko, departed from the memorial service directly to the funeral of former Israeli Prime Minister and President Shimon Peres.

“On the first Yom Kippur after the war in the Kiev shul, there was no one there who was not saying Kaddish. I said at the memorial that it has been the custom there, ever since, that on every Yom Kippur, the entire congregation says Kaddish, and so I asked that whoever was able to should recite it together with me,” Rabbi Bleich told Hamodia.

In September 1941, German forces entered Kiev. Many of the city’s Jewish residents had already fled before their arrival, leaving behind mostly women, children, and those who were too sick or old to travel. On the eve of the invasion, it is estimated that the city boasted a Jewish population of 160,000.

Five days after the Nazi armies entered the city, a building that was serving as German headquarters was blown up by explosives left by retreating Soviet troops. In the wake of the bombing, all of Kiev’s remaining Jews were ordered to report for “resettlement,” on pain of death.

The assembled were led to Babi Yar, a ravine on the outskirts of the city. There they were robbed of their possessions, beaten and murdered by SS units and a large contingent of Ukrainian collaborators, including Kiev police units. According to SS reports, 33,771 Jews were killed within a two-day period, September 29 and 30, which, in 1941, occurred between Rosh Hashanah and Yom Kippur. Babi Yar has gained infamy as one of the largest mass murders of the Holocaust.

On Tuesday, a special session on Babi Yar was held in parliament and was addressed by Israeli President Reuven Rivlin as well as by several local Jewish leaders and Ukrainian politicians.

Rivlin emphasized that the Nazi-era atrocities at Babi Yar and elsewhere in the country were not only crimes of murder, but a conscious effort to destroy the evidence and rob the world of the memory of the Kedoshim.

“We must not be partners in the second crime. We must not play a part in the sin of forgetting or denial,” he said.

President Rivlin went on to discuss the role of Ukrainian nationalists in the killings. His remarks drew controversy in many circles in Ukraine throughout the week.

Rabbi Bleich also addressed the session, marking the first time a Rabbi has spoken on the floor of Ukraine’s parliament.

“My theme was the importance of studying history in Ukraine,” he said. “It’s a very big problem here. There are a lot of young people who literally don’t know who Hitler or Stalin were. Between the Communists and the governments that have taken over since then, everyone wrote their own history and forgot whatever happened before them. In general, Ukrainians have a problem with their own past, and now the biggest problem is that a lot of them simply don’t know what their history is.”