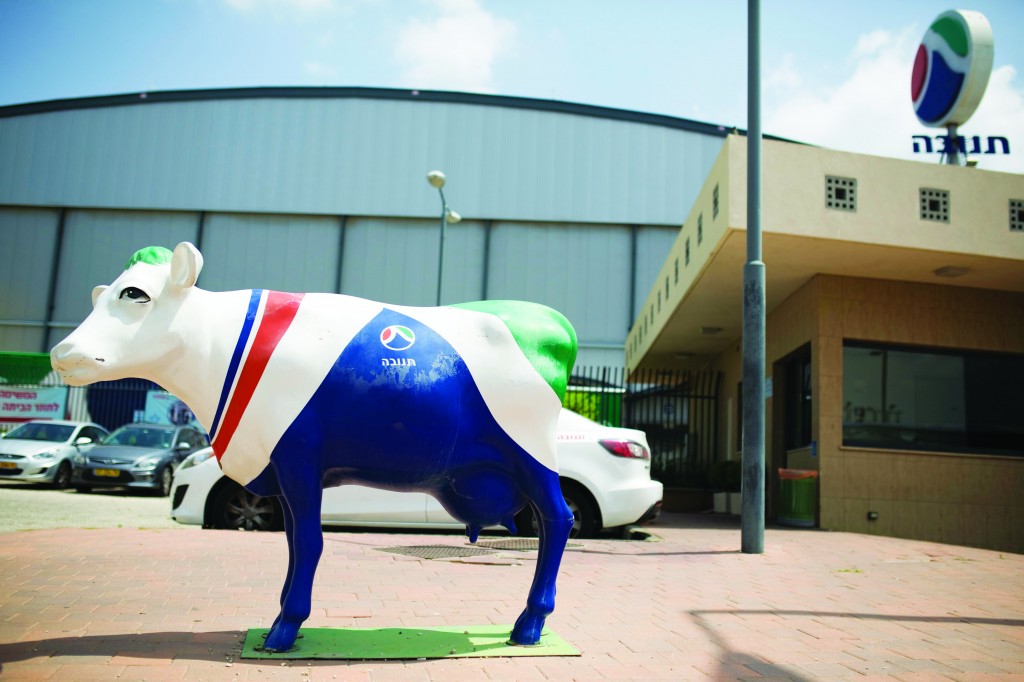 Five hundred workers of the Tnuva company protested outside the offices of Finance Minister Moshe Kachlon against his plans to open up the Israeli market to fresh meat slaughtered abroad. According to the workers, they have been informed by employers that in the event duties are lifted on fresh meat, as Kachlon is planning, some 200 workers will be let go.

As part of his strategy to lower the cost of living, Kachlon has devised a plan to gradually increase the levels of fresh meat to be imported into Israel without customs duties. Immediately after the upcoming holidays, Agriculture Ministry officials will inspect slaughterhouses in Italy to ensure that they meet Israeli import standards, and, if everything checks out, they will join Poland, Ireland, and Spain as approved sources for the import of meat. A senior source in the Ministry said that the plan was to allow for the free import of meat from as many markets as possible, in order to increase competition in the fresh meat market.

As proof that the policy is working, officials pointed to the recent decision to allow the import of fresh meat from Poland. There, shochtim working in slaughterhouses produce meat – including Beis Yosef meat under the Rabbinate’s supervision – that is imported directly to a number of Israeli supermarket chains. As a result of those imports, fresh meat prices have fallen between 5 percent and 10 percent, the officials said. Studies have shown that the program has so far helped bring the overall price of meat down by 11 percent to 25 percent, depending on the season and the cut. As a result of the lower prices, sales of fresh meat have risen by 20 percent since the beginning of the year, while sales of frozen meat, slaughtered and shipped from South America, have fallen by a similar amount.

That all may be true, say Tnuva workers, but those lower prices come at a cost. Although chiefly known for dairy products, Tnuva is also one of Israel’s largest processors of fresh poultry and meat, with its “Adom Adom” label of beef Israel’s most popular. Last week, some 200 workers at an Adom Adom processing plant in northern Israel blocked highways, demanding that the government back down on its plans.

Political power is also being wielded to convince Kachlon to back down from the plan. Histadrut head Avi Nissenkorn told workers at a recent rally that the union “will not allow the fate of hardworking people from the periphery to be dictated by these policies. A happy medium has to be found between imports and enhancing local industries.”

MK Yossi Yonah (Zionist Camp) sent a letter to Kachlon, telling him that “it is impossible for 200 Tnuva workers  to find work as the chagim arrive. The policies that are being enacted in the name of social policy and making things easier for workers now threaten workers in the periphery, who are likely to lose their source of income.”

In a recent speech to agriculture industry officials, many of whom also oppose Kachlon’s policies, MK Rabbi Moshe Gafni, chairman of the Knesset Finance Committee, said that “one thing we can all agree on is that a country is not a factory, whose entire purpose is to show a good profit at the end of the year. I believe that it is the government’s responsibility to assist agriculture, not damage it. The values provided by agriculture workers in the rural areas of Israel, especially in the north, are very important to Israel.”