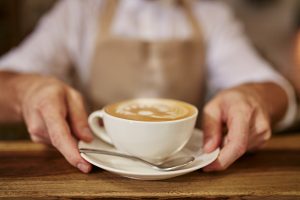 A new study suggests a significant relationship between caffeine and dementia prevention, though it stops short of establishing cause and effect.

The study, published in The Journals of Gerontology, Series A: Biological Sciences and Medical Sciences, found higher caffeine intake in women age 65 and older was associated with reduced odds of developing dementia or cognitive impairment.

Among the 6,467 women in the study, self-reported caffeine consumption of more than 261 milligrams of caffeine was associated with a 36 percent reduction in the risk of dementia over 10 years of follow-up. That level is equivalent to two to three 8-ounce cups of coffee per day, five to six 8-ounce cups of black tea, or seven to eight 12-ounce cans of cola.

“While we can’t make a direct link between higher caffeine consumption and lower incidence of cognitive impairment and dementia, with further study, we can better quantify its relationship with cognitive health outcomes,” said Ira Driscoll, the study’s lead author and a professor of psychology at the University of Wisconsin-Milwaukee. “Research on this topic will be beneficial not only from a preventative standpoint but also to better understand the underlying mechanisms and their involvement in dementia and cognitive impairment,” she said.

Researchers know that caffeine binds to pre-existing adenosine receptors in the brain, so the findings point to a potential mechanism worth further exploring to determine a causative effect, Driscoll told the Milwaukee Journal Sentinel.

“The mounting evidence of caffeine consumption as a potentially protective factor against cognitive impairment is exciting given that caffeine is also an easily modifiable dietary factor” with few risk factors, Driscoll said.

The study was unique because researchers had an unprecedented opportunity to examine over time the relationships between caffeine intake and dementia incidence in a large group of women who consumed different amounts of caffeine, according to Driscoll.

The findings come from participants in the Women’s Health Initiative Memory Study funded by the National Heart, Lung, and Blood Institute. Driscoll and her research colleagues used data from 6,467 women age 65 and older who reported some level of caffeine consumption. Intake was estimated from questions about coffee, tea and cola beverage intake, including frequency and serving size.

In 10 years or less of follow-up with annual assessments of cognitive function, 388 of these women received a diagnosis of probable dementia or some form of global cognitive impairment.