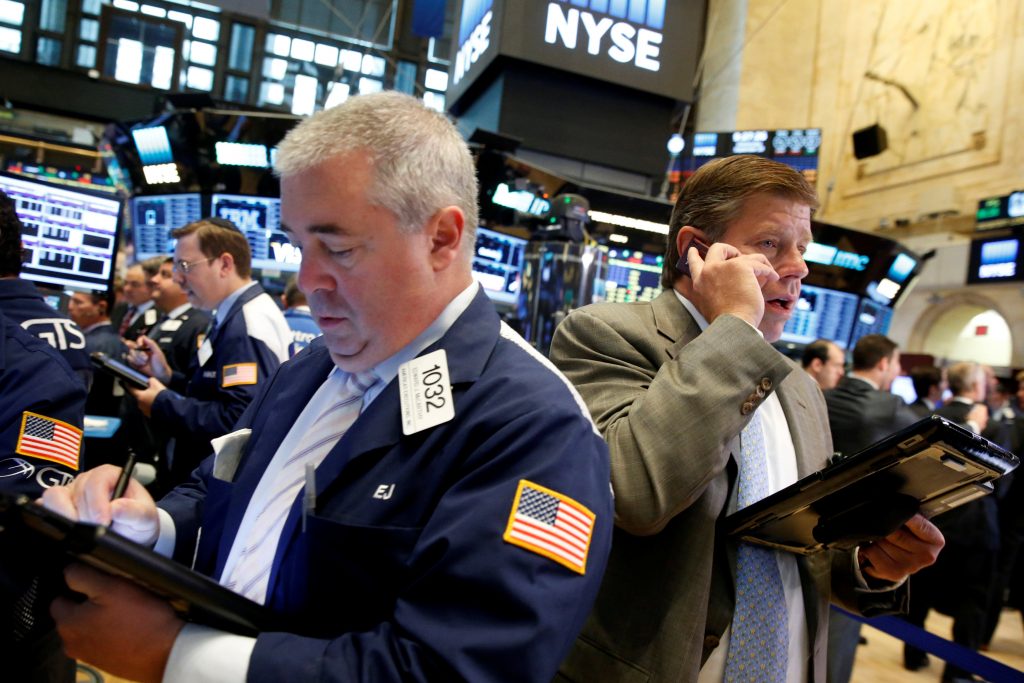 HANGING UP: Phone companies suffered some of the largest declines. AT&T fell 87 cents, or 2.1 percent, to $40.59 after a UBS analyst downgraded the company to “Neutral” from “Buy.” Analyst John Hodulik said profits will get squeezed as the companies offer trade-in deals to try to win customers. He cut his profit forecast for Verizon, which fell 61 cents, or 1.2 percent, to $51.88.

AT&T has climbed 18 percent this year and Verizon has risen 12 percent as investors sought out stocks that pay big dividends while bond yields remain low.

OIL: The price of crude oil gyrated. It started the day higher, then gave up its gains and turned lower, only to change course yet again as investors hoped the nations of the OPEC cartel will strike a deal to limit production and strengthen prices.

BEERS ALL AROUND: Stockholders in SABMiller approved its combination with AB InBev. That vote was one of the last hurdles in the giant beer merger, which has already been cleared by regulators. Some investors saw their payout shrink after Britain voted to leave the European Union. AB InBev stock rose 93 cents to $132.81. As part of the deal, Molson Coors will gain full ownership of its joint venture with SABMiller, MillerCoors. Its stock climbed $1.40, or 1.3 percent, to $108.93.

JUST DIDN’T DO IT: Nike’s profit and sales were stronger than analysts expected, but the athletic apparel maker’s stock slipped $2.19, or 4 percent, to $53.15 as investors worried about challenges including slower orders in North America. Credit Suisse analyst Azar Boehm said orders in that market have been slowing down and are now at their slowest pace in five years, as competition grows. Nike is down 14 percent this year, more than any other stock on the Dow Jones industrial average.

SLEEPLESS NIGHTS: Tempur Sealy International tumbled after the company said third-quarter sales aren’t meeting its expectations. It cut its guidance and said it expects revenue to fall as much as 3 percent this year. That suggests sales of no more than $3.12 billion, while FactSet says analysts expected $3.23 billion on average. Tempur Sealy stock dropped $18.32, or 24.6 percent, to $56.14.

SNAPPY DRESSERS: Uniform rental company Cintas reported a bigger profit than analysts expected in its fiscal first quarter and it raised its projections for the year. Cintas stock rose $2.86, or 2.5 percent, to $116.29.

DEUTSCHE BANK RELIEF: Deutsche Bank traded higher after the German bank said it will sell a life insurance subsidiary and emphasized it is not seeking government aid. The company is selling its Abby Life unit to Phoenix Life Holdings for about $1.2 billion. Investors have been worrying about Deutsche Bank’s ability to pay a $14 billion claim from the U.S. government. Its U.S.-listed stock, which is down by half this year, rose 21 cents, or 1.8 percent, or $12.13 on Wednesday.