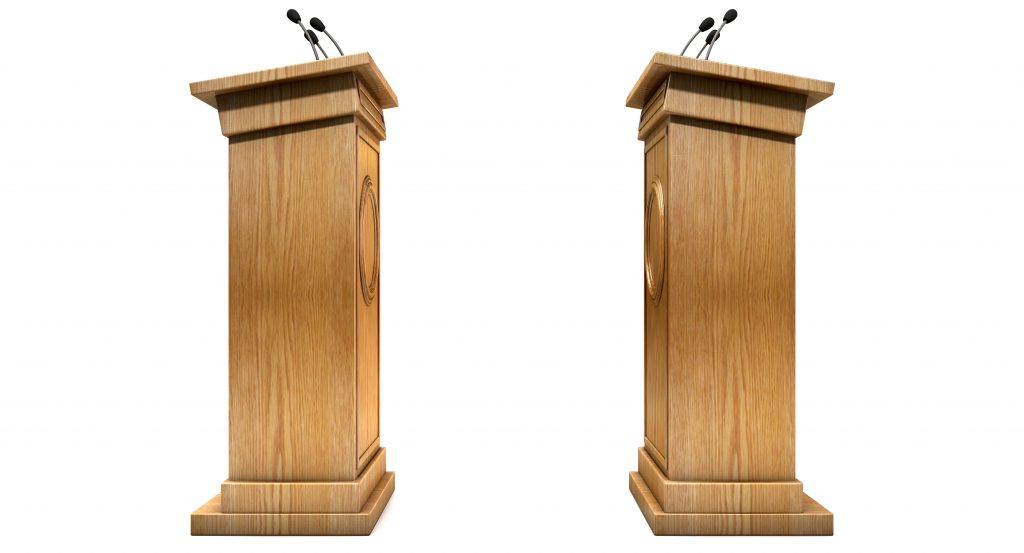 Hillary Clinton and Donald Trump came to their first debate Monday night, each armed with a full arsenal of facts, provocations and precooked one-liners.

Their face-off at Hofstra University on New York’s Long Island, the first of three, came as the race tightens considerably.

The task for Clinton, the Democrat, was to avoid being a policy wonk, erase even just a little of her image as untrustworthy and, if possible, take the opportunity to test his presidential temperament.

Trump, the Republican, needed to show some rhetorical restraint, some policy polish and to portray Clinton as politics-as-usual.

Here are four takeaways from their first time on the stage together:

MEET THE NEW TRUMP, SAME AS THE OLD TRUMP?

A big question was who would we see at the first debate: a restrained Trump, given to cogent answers to complex questions of policy? Or the shoot-from-the-hip, political decorum-be-damned critic?

“I have a feeling I’m going to be blamed for everything,” Clinton said with a derisive laugh after one long Trump harangue.

At another point, she said, “I know you live in your own reality, but that is not the facts,” defending her reversal of her position on the Trans-Pacific Partnership trade agreement.

Clinton took the lead from the outset, casting Trump in the unfamiliar role of playing defense on questions about the economy. He was more reserved initially. But within the first 20 minutes, the aggressive version emerged. Trump began talking over her and hectoring her. It was straight out of his Republican primary campaign playbook.

He ran the risk of cementing what many suburban female voters say turns them off about the Republican nominee.

When Trump championed “stop and frisk” as a policy to lower crime, moderator Lester Holt of NBC News did step in, noting that it had been ruled unconstitutional.

Clinton continued her years-long quest to show everyday Americans that she’s one of them.

Attempting to show a softer side, she spoke about granddaughter Charlotte, who celebrated her second birthday Monday, and repeatedly mentioned her father, a small business owner who died more than two decades ago.

“He worked really hard,” she said. “He printed drapery fabrics on long tables, where he pulled out those fabrics and he went down with a silkscreen and dumped the paint in and took the squeegee and kept going.”

The former secretary of State, U.S. senator and first lady has been trying to show she can relate to working American families after being criticized as an out-of-touch Washington insider garnering hefty paychecks for speeches and books.

Told during a 2008 Democratic primary debate that voters in New Hampshire seemed to like Barack Obama, then a senator from Illinois, more than her, Clinton, humorously said, “Well, that hurts my feelings, but I’ll try to go on. He’s very likable … .” Obama then interjected, “You’re likable enough, Hillary.”

Years later, she is still trying to show that she’s not forgotten her middle-class, Middle America sensibilities as polls show voters do not trust her or believe she understands their problems.

“The central question in this election is really what kind of country we want to be and what kind of future we’ll build together,” she said. “Today is my granddaughter’s second birthday, so I think about this a lot.”

Whether moderator Holt should fact-check the contenders if they uttered something untrue became a debate in itself in the weeks leading up to their encounter. Both candidates worked the refs ahead of the game.

The Clinton camp insisted that Holt should call out falsehoods because Trump’s record of lying has been well documented. Trump said it should be the job of each candidate to point out the other’s errors, not the moderator’s.

In the first 45 minutes, Holt kept to his role as questioner, with one admonishment to the audience to be quiet. But Clinton was quick to call out Trump.

“I kind of assumed there would be lot of these charges and claims,” she said, then directed viewers to her website, which she said was fact-checking Trump statements in real time.

You knew this one would come up.

When Trump was asked about turning over his tax returns, he quickly said he would do that if she releases the 30,000 emails she deleted as secretary of State.

“The country really thinks it’s disgraceful, believe me,” he said.

It’s the issue that’s dogged Clinton’s campaign from the start. And Clinton was forced once again to apologize.

“I made a mistake using a private email,” she said. “I take responsibility for that.”

Clinton has been blasted for exclusively using personal email routed through a private server for government business while she was the nation’s top diplomat. The FBI launched an inquiry into the handling of sensitive data after classified information was found in some emails, but the Department of Justice declined to prosecute.

But the issue persists. In recent days, news broke that three more witnesses were given immunity for their cooperation with the FBI’s investigation.

Clinton didn’t face the same amount of criticism in her prolonged Democratic primary against Vermont Sen. Bernie Sanders, who proclaimed at a debate that “the American people are sick and tired about hearing about your damn emails.” Clinton smiled and shook his hand to thank him.