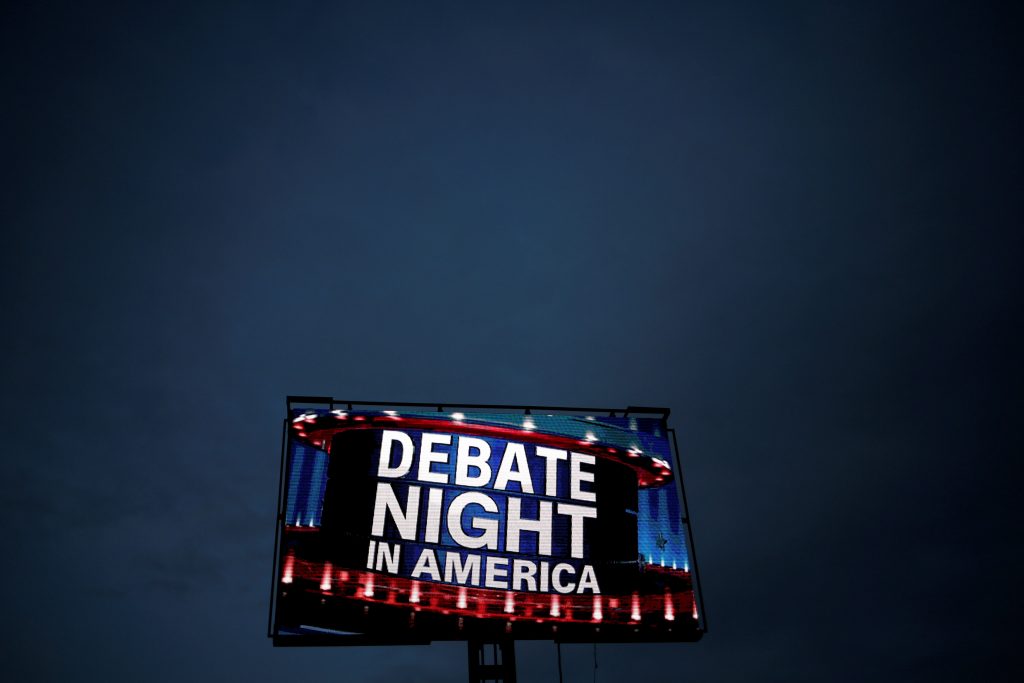 Both global financial markets and everyday voters in polls said Clinton carried the day in the highly anticipated showdown.

Trump’s aides tried to spin the night as a win even as a CNN poll showed that 62 percent of voters who watched said Clinton won the debate compared to 27 percent for Trump.

Risk appetite improved as traders judged that the possibility of a Trump presidency was receding, with the Mexican peso surging more than 2 percent against the dollar as havens from gold to Treasuries retreated.

The debate quickly got personal on the stage at Hofstra University in Hempstead, New York, on Monday, as Trump accused Clinton of staying home while he campaigned and Clinton questioned his wealth, charitable giving, and whether he pays any federal income tax.

Trump’s attacks ran out of steam as the night wore on, while Clinton saved some of her best lines for the end of the 90-minute session. She batted back Trump’s claim that she lacked the “stamina” to be president and reminded viewers of some of Trump’s harshest words about women and minorities.

Trump said that he could have made “nasty” comments about Clinton’s family but that he chose not to. He said afterward that he “didn’t want to do my final attack” on former President Bill Clinton.

“Debates are fine, but I think what’s most important is who is out there with people showing that they’re not hiding behind a podium or in a fundraiser with donors or wherever they may be on many days off,” Trump campaign manager Kellyanne Conway told reporters in the so-called spin room after the debate.

Conway said Trump showed restraint in the final moment of the debate by not responding to his opponent’s “specious, gutter political attacks, partisan negative attacks about him and women” by criticizing her husband.

“Restraint is a virtue, and restraint is certainly a presidential virtue,” Conway said.

Conway said Trump has momentum on his side and plans to return to a busy campaign schedule in the battleground states, starting with a Florida swing Tuesday. Hillary Clinton is due to rally in North Carolina while Vice President Joe Biden and Bill Clinton do separate events for her in Pennsylvania and Ohio.

“Do you feel good tonight? Well, I sure do,” Hillary Clinton told supporters at a watch party after the debate.

Mexico’s peso rebounded from a record low and U.S. stock index futures rose with equities in Asia and Europe after the debate. Canada’s dollar also strengthened.

The Mexican and Canadian currencies have both shown sensitivity to Trump’s improving poll position in recent weeks as the Republican nominee promises to make American’s southern neighbor pay for a border wall and to renegotiate the North American Free Trade Agreement or possibly withdraw from it.

“The peso, Canadian dollar, S&P futures and Australian dollar are all surging — very much a relief rally in risk assets,” said Sean Callow, a senior currency strategist at Westpac Banking Corp. in Sydney. “In FX markets, the most obvious trade to anticipate a Trump presidency is to short the peso.”

“Globally we’d started today on concerns over Deutsche Bank, and the yen weakened while stock markets tipped lower,” said Chihiro Ohta, a Tokyo-based senior strategist with SMBC Nikko Securities Inc. “But with the view solidifying that Secretary Clinton had taken the upper hand in the first presidential debate, the risk-avoiding moves in the yen receded.”

Former New York City Mayor Rudy Giuliani, one of Trump’s top advisers, said that if he were Trump, “I wouldn’t participate in another debate unless I was promised that the journalist would act like a journalist and not an incorrect, ignorant fact checker,” according to Politico.

Trump had disputed moderator Lester Holt’s description of the policing tactic known as “stop and frisk” that Giuliani supports. A U.S. district judge in 2013 ruled that the tactic unlawfully targeted minorities.

“Hillary Clinton has learned how to bait Trump. He doesn’t know how to not take it,” Luntz said on social media during the debate. “Her attacks work. His defenses don’t.”

In addition to the CNN poll – which found Clinton’s ratings comparable to Republican Mitt Romney’s after his strong first debate with President Barack Obama in 2012 – a survey by the Democratic firm Public Policy Polling found more debate watchers considered Clinton the winner.

These post-debate polls are methodologically similar to traditional election surveys unrelated to debates, in contrast to, for example, online reader polls on news sites. Trump on Tuesday heralded several surveys of the latter type that showed him winning the showdown.

But post-debate polls like CNN’s focus on voters who watched, not likely voters overall, and any longer-term changes in public opinion of the race as a result of the debate remain to be seen. Indeed, Trump’s poll numbers rose on his way to capturing the Republican nomination even as his opponents sometimes shone brighter in the primary-debate spotlight.

Clinton’s national polling lead narrowed this month after a strong summer. She’s ahead by an average of 1.6 percentage points when third-party candidates are included, RealClearPolitics said Tuesday.

The election forecaster FiveThirtyEight gave Clinton a 54.8 percent chance of winning the Nov. 8 election in its polls-only model Tuesday, down from 89.2 percent in mid-August.