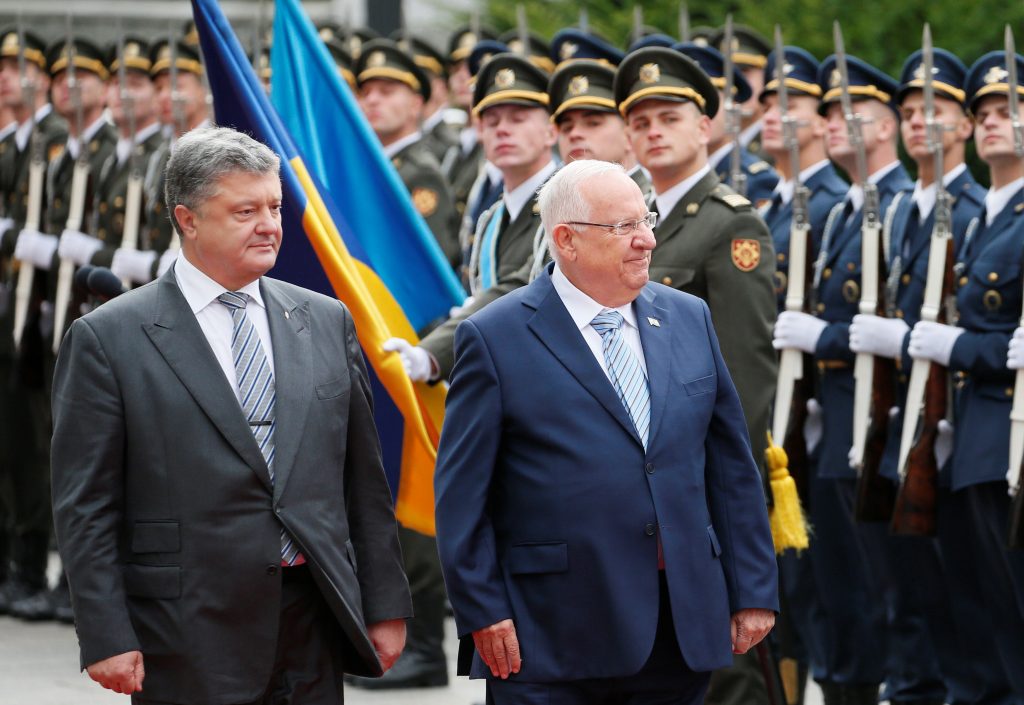 President Reuven Rivlin arrived in Kiev for a state visit to Ukraine during which he is scheduled to participate in the 75th anniversary commemorations of the Babi Yar Massacre.&

“Over this visit we will commemorate the past, but we will look to the future,” said the President before departing on Monday night, and added, “we are nearing 25 years of diplomatic& relations& between the two countries, and this visit is an opportunity to mark the cooperation between us, to make new commitments to working in partnership for the benefit of both our peoples. I see this visit as a good opportunity to strengthen the relations between our countries, and between our peoples.”& &

On Tuesday, Rivlin will attend a ceremony at the Tomb of the Unknown Soldier in Kiev, at which a minute’s silence will be held, followed by the playing of the Ukrainian and Israeli national anthems.&

He will then go on to lay a wreath at the memorial to the Holodomor, the mass starvation in the Ukrainian Famine of 1932-33.

Later, he and Mrs. Rivlin will be received at an official state ceremony by Ukrainian President Petro and Maryna Poroshenko. The Presidents will review a guard of honor and will together stand for the national anthems.

Following the official welcome, President Rivlin will hold a working meeting with President Poroshenko, after which the two will deliver media statements at the Mariyinsky Palace.

Later, President Rivlin will address a special plenary of the Ukrainian Parliament as part of a day of commemorations for the 75th anniversary of the Babi Yar Massacre. &

On Wednesday, Odessa is on the itinerary, with a tour of Jewish historical sites. Afterwards, Rivlin will meet Mikheil Saakashvili, Governor of Ukraine’s Odessa Oblast (region). &

On Thursday,& President Rivlin will meet with Jewish community leaders in Kiev, and then go on to hold& a& working meeting with& Ukrainian& Prime Minister Volodymyr Groysman at the Prime Minister’s Office.& In the afternoon, President Rivlin will participate in a reception for world leaders and figures ahead of the ceremony commemorating 75 years since the Babi Yar Massacre, and then participate in the official memorial ceremony at the site.& &