ANALYSIS: Clinton Outscores Trump – But The Campaign Isn’t Over Yet 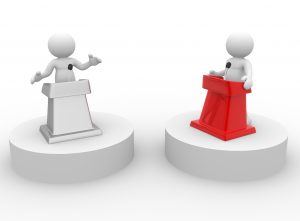 The first presidential debate more than lived up to expectations, a noisy clash between two determined adversaries that produced electric moments and substantive difference. In the early stages, Hillary Clinton and Donald Trump seemed evenly matched, but the longer it went on, the more she was able to score against him.

History has shown that presidential debates, for all their hype, ultimately produce few changes in the trajectory of an election. That could be the case again this year, but there’s little doubt that what took place at Hofstra University on Monday night will produce more big audiences for the final two encounters. Despite all the ground covered, there is much unfinished business.

On a night of memorable exchanges, the most arresting came when moderator Lester Holt of NBC News asked Trump about his efforts to discredit President Barack Obama as not having been born in the United States.

Trump has falsely accused Clinton’s 2008 campaign of starting the issue and has claimed credit for forcing Obama to produce his birth certificate. A steely Clinton didn’t bother to answer the charge about her campaign’s role. Instead she responded by accusing Trump of building his political rise on the back of a “racist lie.”

Trump was also thrown on the defensive over his business record, his failure to release his tax returns and, in the closing minutes, insulting comments he has made about women. The Republican parried as best he could and at other times effectively pressed the case that what the country needs is an outsider who would shake up Washington, rather than a career politician.

Clinton projected herself as a candidate steeped in policy. Trump came off as a candidate of the broad brush. The Democrat went after Trump on substance, arguing that his economic policies would cost jobs and hers would aid the middle class. Trump came after her as an agent of the status quo who is responsible for policies that he said have decimated the country.

Clinton used her time to try to discredit Trump on substance, on fact and on temperament. Time and again she called for fact checkers to get busy. Trump interrupted throughout the debate, defending himself, taking issue with characterizations of his business record and at times dominating by filibuster.

For the loyalists on each side, Clinton and Trump probably came out winners – strong in their own defense, effective in making their points, tactically skilled in skewering the other. The debate probably did more to reinforce long-held impressions of the two candidates than it did to change minds.

Rarely has debate season opened with so much at stake for both candidates – and both seemed to recognize that anything other than an all-out effort would put them at a disadvantage. Trump held nothing back, and Clinton was as aggressive as she has ever been.

Monday’s debate could hardly have come at a more suspenseful moment in the campaign, with national polls suddenly showing the race as a virtual dead heat and Clinton’s advantages in the electoral map eroding with the release of some new battleground-state surveys.

The expectation of perhaps the largest-ever audience for a presidential debate, combined with the close polls, meant that, for once, the extraordinary hype of the pre-debate hours was no overstatement.

Talk that the debate might be surprisingly dull went out the window in the opening minutes. Trump played aggressor as the evening got underway, displaying the kind of tactics that he used against his Republican rivals during a string of debates in the primary race and that he has carried on throughout the campaign, apparently not worried that aggressiveness would be interpreted as unpresidential.

Clinton at first seemed to want to adopt an above-the-fray posture, trying not to rise to the bait from Trump’s jabs and interruptions. But within minutes, she went on the attack against the Republican nominee and continued to press the case that his policies would be a disaster and his temperament would put the country’s security at risk.

In the midst of their attacks on each other, the candidates offered strikingly different worldviews. Clinton’s economic message focused on aiding the middle class with tax and other policies. Trump focused on trade deals that he said had wrecked state after state.

She called his tax plan “trumped-up trickle down.” He responded by accusing her of being “all talk, no action,” adding, “Our country is suffering because people like Secretary Clinton have made such bad decisions.”

On the nation’s racial divide, she called for bringing communities together, while he stressed law and order. They clashed over stop-and-frisk and other tactics, rarely finding common ground.

When the issue of his tax returns came up, she suggested that he is keeping them private because he might have paid no taxes, since the only returns that have become public in the past showed that he had not. “That makes me smart,” he replied.

The backdrop of tightening polls clearly helped shape the dynamic Monday. Trump suffered through a mistake-plagued August but after a campaign shakeup has turned into a more disciplined candidate, enough to produce a rebound during the first weeks of this month. Clinton, meanwhile, endured one of the worst phases of her campaign in the weeks ahead of the debate.

Republicans long had known that Trump needed to use Monday’s debate to project a more serious and stable temperament, given that a majority of voters think he lacks the qualifications to serve as president.

Clinton arrived under considerable pressure as well. The fact that Trump was seen as the candidate with momentum heading into the debate was unnerving to many Democrats, who were privately questioning the state of Clinton’s campaign and her effectiveness as a candidate.

For Trump, reaching college-educated white voters is a primary need. He is lagging in support among this group, and without more backing from those voters, he could struggle to win the election. For Clinton, energizing parts of the Obama coalition remains a critical objective, for without their full support and high turnout, the election will be far more competitive than many Democrats expected.

Clinton probably made more progress than Trump in the first debate, but the ebb and flow gave him opportunities to press his case for change and for the kind of leadership he offers. Clinton no doubt missed some opportunities early in the debate to drive home her points. But Trump may have missed more. Both will be even better prepared to deliver decisive blows when they meet in St. Louis on Oct. 9, but it is Trump who will now have more on the line.