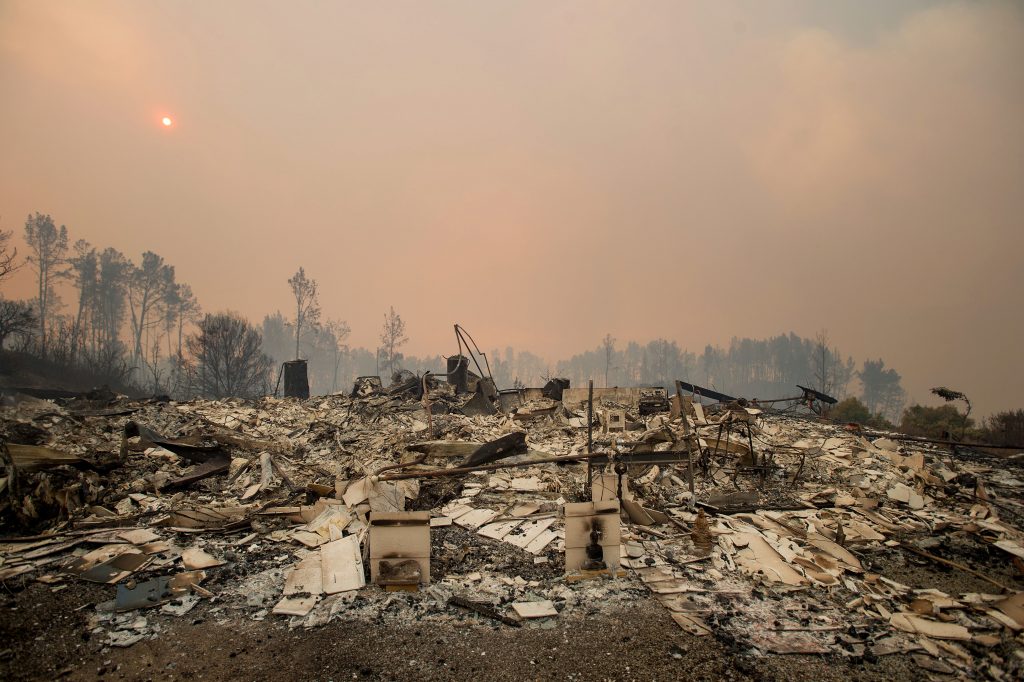 A heat wave stifling drought-stricken California worsened a wildfire Tuesday that burned some buildings and forced people from their homes in remote communities along the Santa Cruz Mountains.

The blaze in a rugged area about 30 miles south of San Jose destroyed two houses and charred more than 3 square miles of dry brush and timber, according to the California Department of Forestry and Fire Protection.

Flames lit up the mountainside above a roller coaster at the Santa Cruz Beach Boardwalk, and a residence was reduced to rubble, though its hot tub still stood. The fire consumed a large home sitting on a hilltop plot and poured out thick, black smoke, while another house sat unscathed below.

The blaze broke out Monday during a statewide heat wave, and crews prepared for another day of witheringly low humidity and temperatures in the upper 90s.

The heat baked even coastal cities that normally benefit from the Pacific Ocean’s cooling effect, but the high temperatures were expected to start easing Tuesday.

“This fire is a good reminder that even though we are approaching October, this time of year is historically when we experience the largest and most damaging wildfires,” Cal Fire spokesman Daniel Berlant said.

It threatened 300 buildings, though it’s not clear if they were homes or smaller structures. The fire, which was partially under control, also burned close to TV and radio towers. No injuries were reported.

Doreenann Bellamy packed her dog, photo albums and firearms into her pickup truck as she and her husband left their home.

“Everyone on the mountain has guns, and you’ve got to grab your guns first,” she told The San Jose Mercury News.

Danielle Mays anxiously waited for a neighbor to bring her Boston terrier, Layla, and her cat, Callie.

“That’s it; that’s what matters,” Mays told the newspaper Monday. “I have fire insurance for the rest.”

To the north, crews gained control over a 2-square-mile fire that briefly threatened homes and The Geysers geothermal complex, a massive power producing facility.

“It’s looking very good, but we still need to make sure smoke and small fires inside the perimeter are taken care of,” he said.