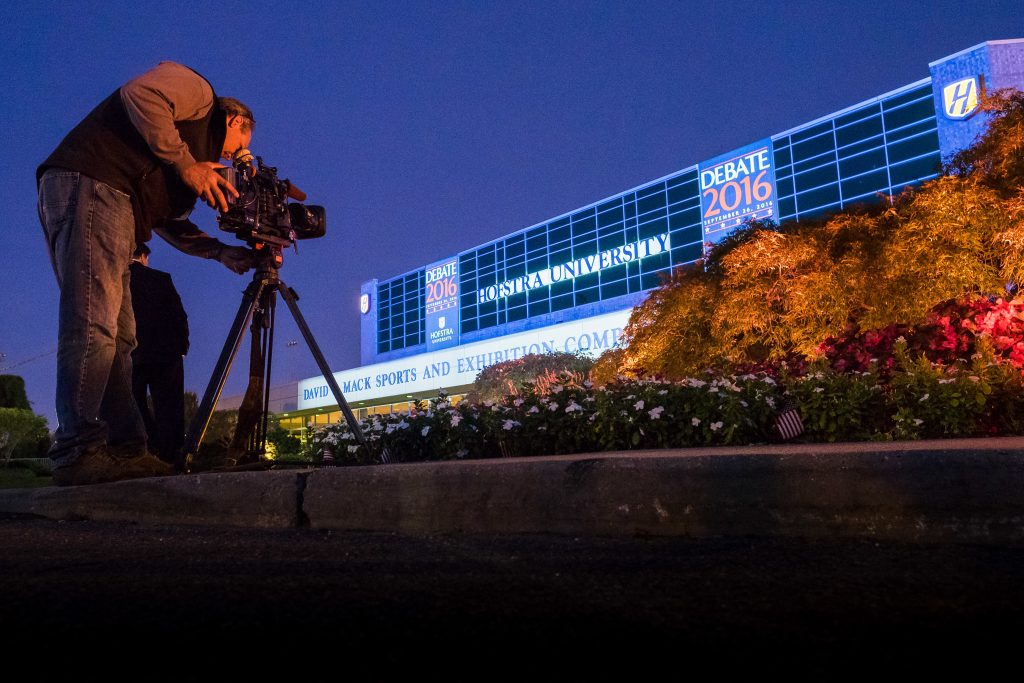 After months of tangling from afar, Hillary Clinton and Donald Trump will confront each other face to face for the first time in Monday night’s presidential debate, laying out for voters their vastly different visions for the nation’s future.

The high-stakes showdown — the first of three presidential debates — comes as both candidates are viewed negatively by large numbers of Americans, with Democrat Clinton facing questions about her trustworthiness and Republican Trump struggling to convince many voters that he has the temperament and policy depth to be president.

Interest in the presidential race has been intense, and the campaigns are expecting a record-breaking audience to watch the 90-minute broadcast debate at suburban New York’s Hofstra University.

Clinton, a former senator and secretary of state, is banking on voters seeing her as a steady hand who can build on the record of President Barack Obama, whose popularity is rising as he winds down his second term in office. She’s called for expanding Obama’s executive orders if Congress won’t pass legislation to overhaul the nation’s immigration system and for broader gun control measures. Overseas, she’s called for a no-fly zone in Syria but has vowed to keep the military out of a large-scale ground war to defeat the Islamic State terror group.

For Clinton, victory in November largely hinges on rallying the same young and diverse coalition that elected Obama but has yet to fully embrace her.

“Hillary has recognized that she has a lot of work to do to earn people’s trust,” said Robby Mook, Clinton’s campaign manager. “We think this debate is a fantastic opportunity for her to present not just what she is going to do to make a difference in people’s lives, but she actually has a long history of getting this done.”

Trump has tapped into deep anxieties among some Americans, particularly white, working-class voters who feel left behind in a changing economy and diversifying nation. While the real-estate mogul lacks the experience Americans have traditionally sought in a commander in chief, he’s banking on frustration with career politicians and disdain for Clinton to push him over the top on Election Day.

“He speaks a language that people out there can understand, and so I think that he’s going to have a good night,” Republican National Committee Chairman Reince Priebus said of Trump’s debate prospects.

The centerpiece of Trump’s campaign has been a push for restrictive immigration measures, including a physical wall along the U.S.-Mexico border and an early proposal to temporarily bar foreign Muslims from coming to the U.S. But he’s been less detailed about other ideas, including his plan for stamping out the Islamic State terror group in the Middle East.

Clinton’s camp is worried that Trump will be held to a different standard in the debate and is particularly concerned that the notoriously hot-headed businessman will be rewarded for simply keeping his cool. Clinton backers have been publicly pushing moderator Lester Holt of NBC News to fact-check Trump if he tries to mislead voters about his record and past statements.

“All that we’re asking is that, if Donald Trump lies, that it’s pointed out,” Mook said.

Trump’s advisers have indeed been urging him to keep calm on stage, mindful of voters’ concerns about his temperament.

Trump was often a commanding presence in the Republican primary debates, launching biting personal attacks on his rivals. But at times, he appeared to fade into the background, especially during more technical policy discussions — something he’ll be unable to do with just two candidates on stage.

Clinton has debated more than 30 times at the presidential level, including several one-on-one contests against Obama in 2008 and Vermont Sen. Bernie Sanders in 2016. But Monday’s contest will be her first presidential debate against a candidate from the opposing party.