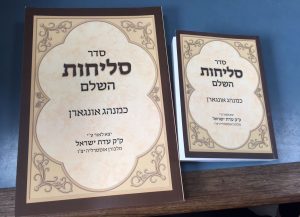 Due to a worldwide unavailability of Selichos “Nusach Ungarn,” the Adass Yisrael community in Melbourne, Australia has just published a newly-typeset edition of the Selichos for the benefit of their mispallelim.

This is probably the first time that a Selichos has been printed in this part of the world.

The “Nusach Ungarn” Selichos has many more selections than those found in the the Nusach Poilen and Lita editions.

Rabbi Yoel Oppenheim, a maggid shiur in the Adass Yeshivah Betzel Hachochmo, and son-in-law of Adass Dayan Harav Yehuda Katz, painstakingly put together the entire text after which local printer and member of the Adass community Mr. Yumi Rosenbaum used his creative genius to publish an amazingly clear and user-friendly Selichos. They were assisted by Rabbi Shimon Opman, whose input enhanced the entire project. One of the features of this edition is the inclusion of the “repeat” line of the first stanza at the end of each pizmon as is the minhag in the community. 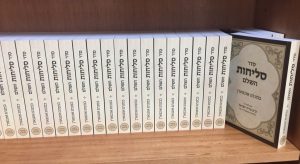 The Selichos has been released in two sizes, including a larger-type edition for the benefit of older mispallelim. A number of generous sponsors assisted with the cost of publication and donated a large number of Selichos for public use in shuls.

As only a handful of kehillos worldwide still use the Nusach Ungarn (mainly those with Oberlander and Yekkish backgrounds), the regular publishers overlook the need for this nusach. Thus, this undertaking has been welcomed in Melbourne’s Adass Yisrael community as well as the other kehillos who have been loyal to their traditional nusach.