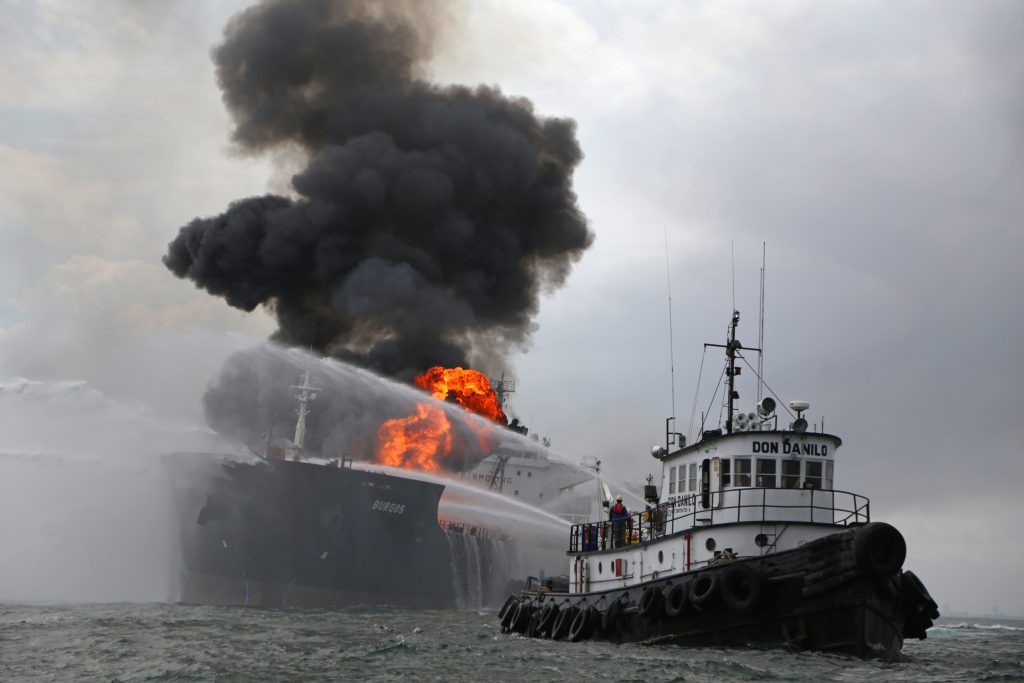 A fuel tanker carrying gasoline and diesel fuel continued to burn off the Gulf coast of Mexico on Sunday, a day after it erupted in flames.

Firefighting boats were battling the blaze aboard the Burgos, which is owned by state oil company Petroleos Mexicanos, or Pemex. A large plume of smoke from the burning ship could be seen from the port of Veracruz.

A Pemex statement said a team of international experts in putting out fires and transferring fuel arrived to assist Sunday.

The company said the Burgos’ double hull had prevented a fuel spill. It said that the volatility of the fuel on the ship would aid in its evaporation and that the Mexican navy evaluated the area Sunday morning and did not find traces of oil in the sea.

Firefighters have been using a chemical extinguisher against the fire, according to the Veracruz Port Authority. Officials declined to speculate on when the fire may be put out.

Mexico’s environmental protection agency, Profepa, said Sunday in a statement that a mile of containment booms were deployed to prevent any fuel from reaching the coast.

Pemex said fuel seen on the water was what mixed with the water used to fight the fire and will dissipate. The Burgos was carrying about 168,000 barrels of gasoline and diesel.

The ship was anchored about 7 miles off the coast when it called for help at 11:30 a.m. Saturday. All crew members were rescued without injury. Pemex said the fire was in two of the ship’s tanks.

At the time of the incident, the Burgos was sailing from Coatzacoalcos in eastern Veracruz state to the Pemex terminal, Port Authority Director Juan Ignacio Fernandez said late Saturday.