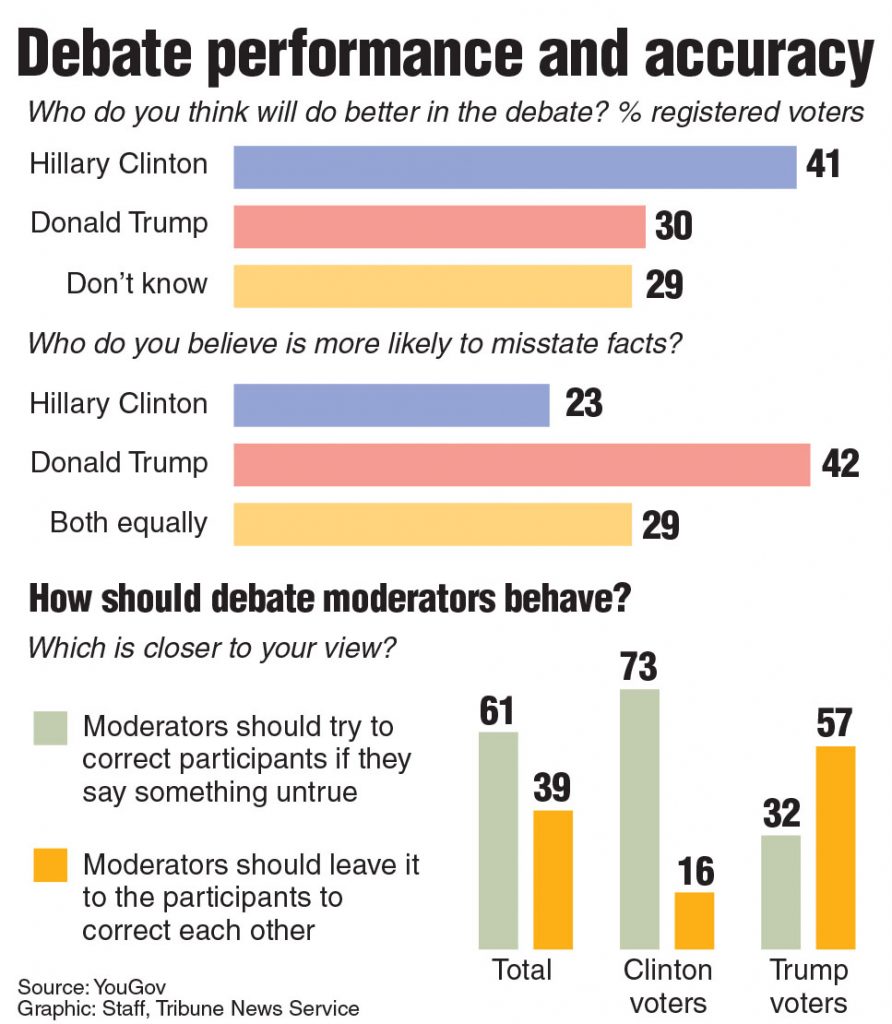 Monday’s debate between Donald Trump and Hillary Clinton is the most anticipated event of a presidential campaign filled with remarkable and revolting moments. But if the debate season, when it’s all over, has changed the trajectory of the race, it will be a surprise. Amid all the sound and fury, changes now seem to come in inches.

The first debate at Hofstra University should be great theater. Trump, an unguided missile, will be seeking to project a calmer demeanor and a command of the facts enough at least to reassure voters who doubt his capacity to serve. Clinton, a studious and well-prepared debater whose expertise on many issues is deep, will be looking to avoid the weeds, offer a bigger and more affirmative vision and mostly try to prove that her rival is unfit to occupy the Oval Office.

Trump will not be tethered to the teleprompter that has provided a modicum of discipline to his candidacy over the past few weeks and therefore will be less predictable. He has not done a one-on-one debate, as she has, nor has he faced a format that, in theory at least, is designed to force the candidates to speak at greater length on the issues.

Expectations are higher for Clinton than Trump. After all, debates are supposed to reward those with expertise, a command of the issues and the steadiness required of a chief executive. But debating skills have little to do with what makes a good or great president.

President Barack Obama didn’t lose the first debate to Mitt Romney in 2012 because he didn’t know the issues. It was all about demeanor, energy and engagement. Debates are the ultimate show time in presidential campaigns. Trump is the acknowledged master of reality TV.

Clinton’s team has suggested she is preparing for any eventuality from Trump, from the bombastic and sarcastic candidate who hectored his rivals during the Republican debates to the throttled back nominee of late whose goal will be to pin on Clinton anything that has gone wrong during Obama’s eight years in office and convince the convincible that they really should want a change in direction.

Her team is also working the refs as no candidate has ever done. Under the guidelines of the Commission on Presidential Debates, the moderators — in this case NBC’s Lester Holt — are supposed to draw out the candidates but mostly remain secondary players.

But this year is like no other in terms of the focus on the role of the moderators. Clinton’s team is publicly demanding that Holt become a real-time fact-checker to a candidate — Trump — whose relationship to the truth has been so loose that he has earned a record number of Pinocchios and pants-on-fires from the media and other fact-checking operations.

Clinton’s team wants Holt to challenge Trump and declare whenever he lies about his record. Others say it’s each candidate’s responsibility to check the other, though the risk of that is a debate that devolves into he-lied-she-lied exchanges that leave viewers ill served.

Whatever happens Monday, the declared loser will have two more opportunities to recover. With history as a guide, it’s likely the race will look similar at the end of the debates as it does on this pre-debate weekend.

In their book, The Timeline of Presidential Elections, political scientists Robert S. Erikson of Princeton University and Christopher Wlezien of the University of Texas examined polls dating back to 1960, when the first televised debates were held. “It is clear that debates do not have major impact to the same degree as party conventions,” they write. “What is not clear is whether they have more effect than other events during the fall campaign.”

Lynn Vavreck, a political scientist at the University of California at Los Angeles, emailed this assessment: “There’s very little evidence debates change much in terms of vote choice. They may help bring some stray partisans home . . . but they are rarely game changers, despite the lore.”

Many people add the caveat that Trump is such an unconventional candidate that the race will unfold in unpredictable ways. It has also been suggested that his campaign has the capacity to change the electoral map in ways previous Republican nominees have not — for better and worse. Has that happened?

Trump is leading in Iowa and Ohio, two states Obama won twice. Florida is extremely competitive, as is North Carolina. But another way to look at this race is that it is a rerun of 2012, with the added factor of some uncertainty about Trump’s effect on white voters. What is apparent is that states that have always been close are close this year.

The biggest winning margin in Florida over the past four elections was just five points, in 2004, but otherwise three points or fewer. Obama won by slightly less than one point in 2012. It should again be close to the end. Obama won North Carolina by three-tenths of a percent in 2008 and lost it by two points in 2012. It too could be heading toward another photo finish this year.

Trump could win Iowa, a state Republicans won once in the past four elections. Clinton’s problems there are twofold. First is the higher percentage of whites without college degrees. Second, Democrats say, is the degree to which Republicans pounded her during the caucus campaign that raged from early 2015 to February of this year.

There are battles underway in some other swing states. Nevada looks very competitive. Obama won it twice, but so too did former president George W. Bush. New Hampshire, which went for Bush in 2000 but has been with the Democrats since then, has Clinton leading. Nevada has fewer college-educated voters, so it’s going to be better for Trump.

Colorado and Virginia went for Bush in his two elections and Obama in his two. Colorado has tightened, now closer than Democrats had hoped. Clinton also continues to lead in Virginia. The Clinton team and other Democrats express confidence that she will prevail in both, thanks to demographics. If so, that will badly damage Trump’s hopes of winning.

What’s crucial is, at this stage, Trump is not leading in states that have been consistently in the Democrats’ column in recent elections. He is trailing in Pennsylvania, Michigan and Wisconsin, for example, all states where the demographics — older, whiter electorates with significant numbers of voters without college degrees — help him.

Bush lost Wisconsin twice by less than a point. But conservative talk radio in the state has been railing against Trump for months. Michigan has been the best of those Midwest battlegrounds in terms of Democratic performance in presidential races. Polls are tighter there, but coming close for Trump isn’t enough.

That leaves Pennsylvania, still, as the linchpin. It’s always attractive to Republicans, but the average Democratic margin there over the past four elections is 5.6 points. Trump has to change the equation of the electorate there to win the state. Without it, his path remains extremely difficult.

That’s the context for Monday’s debate, a small Clinton lead nationally and several competitive state races with the map still more favorable to her. Can Trump change that — and defy history — with his performances in the debates? Can he move the white voters he needs to win? That’s why Monday’s audience could be huge.