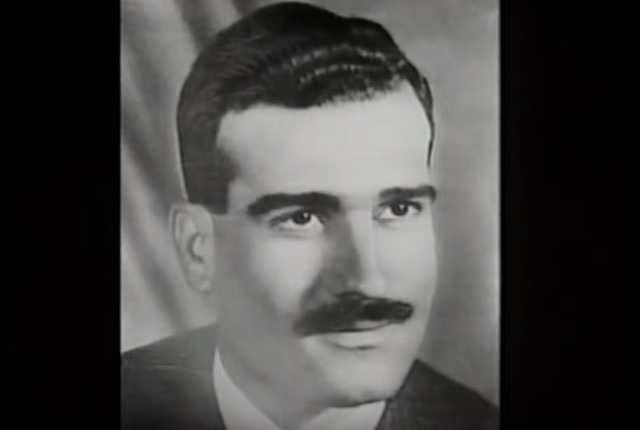 Fifty one years after Israel’s master spy, Eli Cohen, Hy”d, was executed in Damascus, Syria, his widow received regards from her husband in the form of a short video released by the Syrians of the actual hanging. The video was found by Syrian rebels, who publicized it. They say they know where he was buried and promise to transfer his remains to Israel for burial. Who was Eli Cohen, the man without whom the Six-Day War could have ended very differently, and how was his identity exposed?

The phone call that Nadia Cohen received last week took her back 51 years in time to the dreadful day when her husband, Israel’s master spy Eli Cohen, Hy”d, was hanged in Damascus, the capital of Syria. His identity as a spy had recently been exposed and, after a lightning quick trial, he was sentenced to death.

The phone call was from one of Israel’s broadcasting companies, and the caller told her that in another hour, during the evening newscast, the video of her husband’s execution would be aired. Where was it from? What was in it? Was it authentic? She fired off those three questions before the caller hung up, after providing no answers.
Indeed, at the appointed time, the video was aired. It was short, and taken by the Syrians to document the execution. It was recently found by the rebels in Damascus, who publicized it. They say they also know where Eli Cohen is buried and promise to transfer his remains to Israel. Who was Eli Cohen, the man without whom the Six-Day War could have ended very differently? How was he exposed, caught and hanged?

The story of Eli Cohen’s mission and death as an intelligence agent in Syria became an Israeli legend. Since his execution, he has played a significant role in the consciences of Israelis, young and old. As Meir Amit, the Mossad head at the time, said at a meeting of mourning at the Israeli Embassy in Paris the morning after the execution, “Thanks to Eli Cohen, we had a complete picture of what was being done in Syria. His reports were excellent and he displayed a lot of insight when analyzing the political situation.”

Eli Cohen’s body was not brought to kever Yisrael. Israeli governments throughout the years have pressured the Syrians, but were ineffective. A prisoner exchange with hundreds of Syrian POWs from the Six-Day and Yom Kippur Wars also did not help get back the remains.

Eli Cohen was born in 1924 in Alexandria, Egypt, one of eight children. His parents had emigrated to Egypt from Aleppo, Syria, and conducted a religious home. Their languages at home were Arabic and French. As a child, Eli was very curious and liked to draw, take photos and sail in the Mediterranean Sea. He studied at the school of the Jewish community, where he excelled and displayed significant abilities, especially in math and engineering. He also had a phenomenal memory.

Eli’s first job after making aliyah was as a translator from Arabic to Hebrew of materials for the IDF intelligence unit. After his request to be integrated into more operational activities was rejected, he decided to try his luck in the civilian job market. He was hired as a salesman in Tel Aviv, and while the job provided him with financial security, he sensed that he was destined for something else. Therefore, in 1960, he left that job. He told Nadia he had been fired. After a few weeks, he was hired by the Mossad. He told Nadia he was working in a secret government factory.

His training included memory-sharpening exercises, surveillance and evasion, photography, including the use of microfilm, getting used to Arab regions and populations, studying the Koran and learning Islamic customs, visiting mosques and adapting a Syrian dialect and accent. Eli was sent on secret missions. He was chosen to serve as a spy in Syria and toward this end, a cover story was built for him: He was named Kamal Amin Thaabat, a fictitious name for a businessman who lived in Argentina and had decided to return to his homeland.

In 1961, Eli left Argentina. During his vacation in Israel, his father passed away, and right after the shivah he had to part from his family. His acquaintances thought he was a businessman taking trips abroad. In 1962, he sailed from Italy to Beirut en route to Damascus. On the ship, Eli linked up with another immigrant returning to his homeland, and used that man to start forging connections among the Syrian elite. In his first telegram from Damascus, Eli reported an alliance developing between Syria and Iraq. He then conveyed information about weapons deals and troop increases in the Syrian army.

In 1962, after visiting Israel, he returned to Damascus and continued to penetrate the Syrian political echelons. In those months, a military coup took place in Syria, and the Baath party came to power. Many key people in the party were friends and acquaintances of Kamal Thaabat — Eli Cohen — and that catapulted him into the lion’s den, where he became very close to the decision makers in Syria.

As an activist in the party, and one of the confidantes of President Amin Al Hafiz, senior army officials shared with him sensitive information and invited him to tour army bases, in an attempt to promote their own careers. Sometimes they relied on him so much that they gave him information about embarrassing mistakes that the army had made that even the Syrian president himself had not been told of.

The information he conveyed about tanks, aircraft and new cannons that the Syrians had purchased, and the deployment of its army in the Golan, had a decisive influence on Israel’s victory on the northern front during the Six-Day War two years after his death. His advice to the Syrians to plant eucalyptus trees for camouflage around their forts in the Golan Heights helped the IDF forces identify them from a distance. Levi Eshkol, Israel’s prime minister at the time, said that Eli Cohen’s actions saved the lives of many brigades of soldiers, and the information he provided brought about the great victory.

In January 1965, advanced surveillance equipment to detect radio broadcasts arrived in Syria from the Soviet Union. In order to install it and reset the frequencies, it was decided to completely shut down all radio broadcasts in the country on January 7. Cohen had gleaned an enormous amount of information, but this detail did not reach him. As a result, the detecting devices of the Soviet communications experts operating in Syria were able to home in on the signal emanating from his apartment.

In January 1965, Syria officially announced the exposure of Eli Cohen as a spy. After he was tortured and interrogated for a month, his trial began. It took place in a military court with closed doors. The judge accused him of treason, because the entire Arabic world viewed him as an Arab. Eli Cohen replied, “I’m not a traitor, I am a messenger.”

“What is your state, Israel? You are Egyptian. Your country is Egypt?” the judge snapped at him. Five months after being caught by the Syrian defense forces, Eli Cohen was hanged in public in the Marjeh Square in Damascus.

Before the execution, he was allowed to meet with Rabbi Nissim Andabo-Cohen, zt”l, the Chief Rabbi of the Damascus Jewish community, who gave him encouragement and davened with him. The Rav testified that he had met a broken yet determined person who wanted his family to be informed that he had fulfilled his obligation to the end and had remained faithful to his nation and his land. After reciting Kaddish for his father, his last request was to write a letter of farewell to his wife and children: “Nadia, and my dear family! I write these final words to you with the hope that you always remain united. I ask my wife to forgive me, to take care of herself and to give our children a good education…The day will come when my children will be proud of me. And you Nadia, should please marry another man so that he can be a father to our children. You are totally free. I ask you not to mourn what happened, but to look at the future. Pray for my soul.”

Eli was hanged in Damascus on 15 Iyar 5725/May 18, 1965, having turned 41 that month. The Israeli heads of state who eulogized him said that he was a “hero who had given his life for the service of his country, and the nation owed his memory a great debt because of his contribution to their security.”