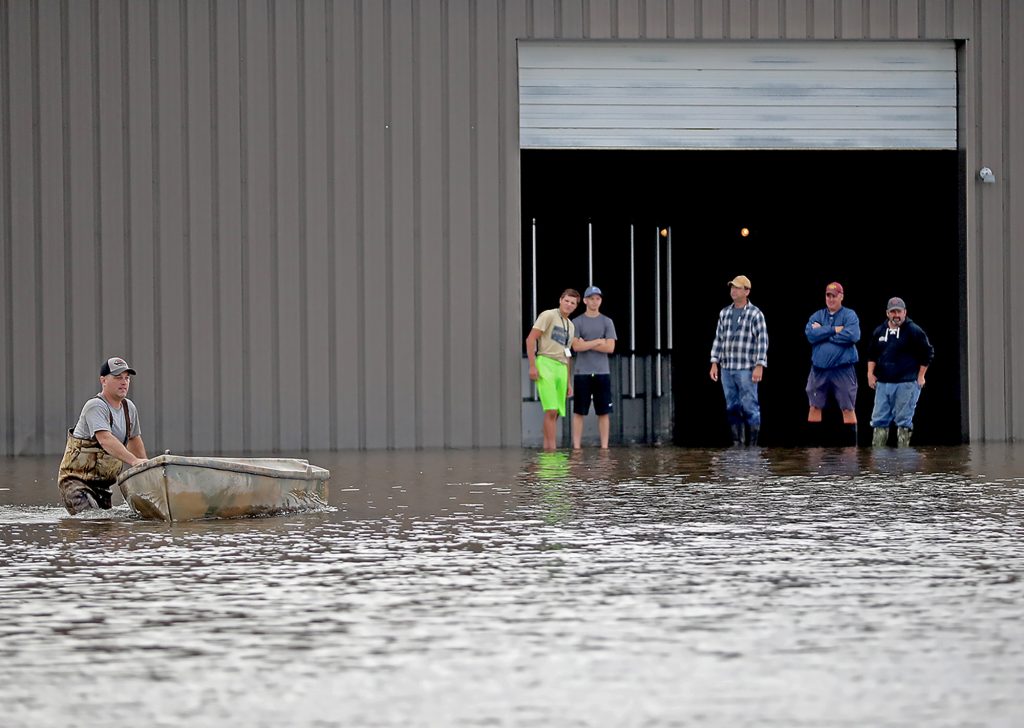 Authorities in several Iowa cities were mobilizing resources Friday to handle flooding from the rain-swollen Cedar River, which has already forced evacuations in several communities along its path through northeastern Iowa.

More rain fell Thursday night and earlier Friday, and the National Weather Service said the threat for flash flooding remained high through the day. Noting the possibility of even more rain in the area, forecasters said that at least moderate flooding was likely in several areas, including Cedar Falls, Waterloo and Cedar Rapids.

Just across the Mississippi River in Wisconsin, residents of Victory, a tiny community that sits at the base of a river bluff, were recovering from storms and flooding that caused two deaths. Authorities said 53-year-old resident Michael McDonald was killed when his house slid onto state Highway 35 on Thursday, and 79-year-old Joseph Menne was killed as he attempted to drive through floodwater on a road near his home on Thursday. Menne was in a pickup truck pulling a trailer that got stuck in six feet of water. The flood water eventually filled the pickup compartment.

In Iowa, firefighters and police have been talking to residents in low-lying portions of the North Cedar neighborhood in Cedar Falls, advising them of the rising waters and their option to evacuate. Public schools were closed, and natural-gas service was being disconnected from some customers because of the flood risk.

The dike system protecting downtown Cedar Falls was expected to hold, but Public Safety Director Jeff Olson said it will be patrolled. The weather service said the river was expected to crest at 97.6 feet Saturday morning — a little less than five feet below the record crest of 102.1 feet in June 2008.

Waterloo has closed several storm sewer floodgates, activated lift stations and put up flood-control walls at several spots downtown. Some downtown bridges may close, and the fire department has been lining up extra boats for water rescues.

Portable dams, barriers and pumps were being deployed around Cedar Rapids, where the river was expected to crest at 24.1 feet on Monday morning — seven feet below the June 2008 crest of 31 feet. But even at the lower level, street flooding was expected in several areas, including the downtown core.

The city said 14,000 sandbags have been ordered for public use and officials intend to close several low-lying roads.

Another eastern Iowa river, the Shell Rock, also has forced evacuations as it left its banks. In Greene, deputy city clerk Melinda Ritter said Friday that the home she is selling was surrounded by water — but so far, the water hasn’t seeped inside. She said she spent a restless Thursday night at her new home at a higher elevation, away from the danger.

Clarksville Police Chief Barry Mackey said that on Thursday night, water overtopped the levee that runs down the east side of the Shell Rock River, just west of the Butler County community of about 1,400 people. Several homes were surrounded by water, including his, Mackey said, speaking from the home of another police officer that sits on higher ground.