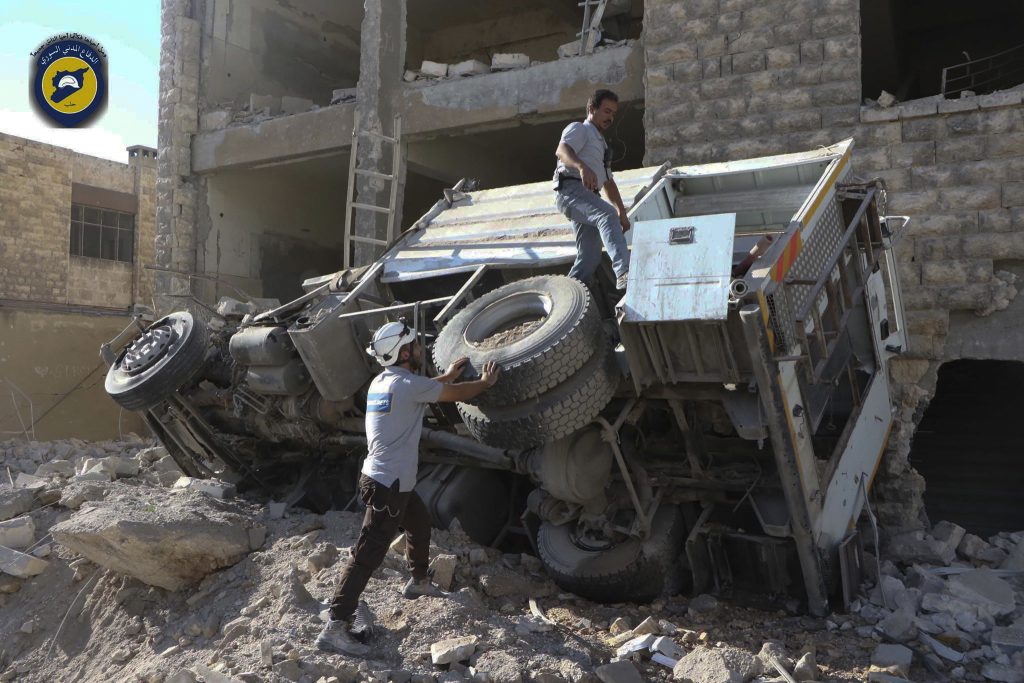 A bombing campaign in rebel-held districts of Aleppo, Syria, intensified Friday, targeting several neighborhoods and centers of the award-winning volunteer civil defense group known as the White Helmets, as the government announced a new offensive in the area.

Diplomatic efforts in New York have failed to salvage a Syrian ceasefire that lasted nearly a week, before giving way to a new level of violence. Residents and activists say that the bombing, which began in earnest late Wednesday night, has been unprecedented, targeting residential areas, infrastructure and civil defense centers. Some streets have been closed off because of piles of rubble.

The Britain-based Syrian Observatory for Human Rights said that at least 27 civilians, including three children, were killed in about 30 raids that began overnight. A member of the city’s forensic team, Mohammed Abu Jaafar, said that he had documented nine deaths since late Thursday, including five women and two children. Abu Jaafar said that it was impossible to document casualties and injuries Friday because of the intensity of the bombing.

The Observatory said dozens of people were wounded and an unknown number remained buried under the rubble of buildings destroyed in the intense airstrikes that began in the early hours Thursday. In the neighborhood of Bab al-Nairab, a girl was pulled out alive from under the rubble earlier Friday, according to Ibrahim Alhaj, a member of the Syrian Civil Defense.

Alhaj said three of the group’s centers had been targeted in the air bombing campaign that usually accelerates after dark. By Friday morning, one center in the Ansari neighborhood in the southern part of the rebel-held district had been put out of service after it was hit at around 7 a.m. Ambulances and the one fire engine that serves the rebel-held part of Aleppo had been damaged. In another center, Alhaj said, a bomb fell in the courtyard of the center and the extent of the damage was not yet clear.

“I have not seen in my life such bombardment. It is very, very intense,” Alhaj said.

“The regime tried to advance in several neighborhoods in Aleppo,” he said, adding that rebels have so far been able to repel all attacks. He said the attack on civil defense centers had hindered their work because some of their vehicles had been destroyed.

The intense campaign has made it even more deadly for the civil defense teams to move. Already suffering from a shortage of fuel, their vehicles have struggled to meet the increased demand on their services. For hours Thursday, the teams searched to save civilians who were buried under rubble in several neighborhoods in rebel-held Aleppo.

A Syrian military official said on Friday that airstrikes and shelling in Aleppo might continue for an extended period and the operation will expand into a ground invasion of rebel-held districts. The unnamed military official was quoted by Syrian state media as saying that operations in rebel-held eastern parts of the city “will include a ground offensive.”

The military said leaflets were dropped over rebel-held parts of the city calling on opposition gunmen to surrender and benefit from a recent amnesty issued by the state for fighters who agree to put down their arms. “The belt is getting tighter around you. Surrender now or you will meet your inevitable destiny,” read one of the leaflets, which had a photo of a dead bearded militant with a rocket-propelled grenade next to him.

The Nour el-Din el-Zinki insurgent group, which is powerful in Aleppo, said the government’s offensive shows that the government and its allies want to impose “a military solution” to Syria’s crisis.

“We will continue to defend our people in Aleppo and our existence. We will not surrender,” the group said in a statement. “We will repel them. Aleppo will remain free of Assad, his sectarian militias and thugs.”

Other residents reported that one of two water stations supplying the city had been hit. Addounia, a pro-government media station, blamed the armed groups for targeting the water station in Bab al-Nairab, which feeds both sides of the contested city. The station said pumping had ceased, but said work had begun to fix it. It was not immediately possible to verify or assess the extent of the damage or independently confirm who hit it.

The air campaign was followed by an announcement late Thursday by Syria’s military command in Aleppo that it is launching new operations in rebel-held eastern quarters of the city. The announcement and reports of clashes on several edges of the besieged city raised concerns of imminent ground operations.

Rami Abdurrahman, of Observatory for Human Rights, said Friday that government troops seized buildings on the frontline, pushing back rebel fighters in the southern al-Amiriah district.

Alhaj, of the Civil Defense, confirmed the government troop movements on the city’s southern edge.

The Observatory said there were also air raids on the north of Aleppo city, and reported clashes on the frontline, near the old city center.

After a contentious two-and-a-half hour meeting with colleagues in New York, Secretary of State John Kerry and Russian Foreign Minister Sergey Lavrov said they would meet again Friday in a bid to find a way forward. Despite a week of diplomatic talks and attempts to seek consensus, developments on the ground in Syria seem to have overshadowed prospects for bringing about calm.