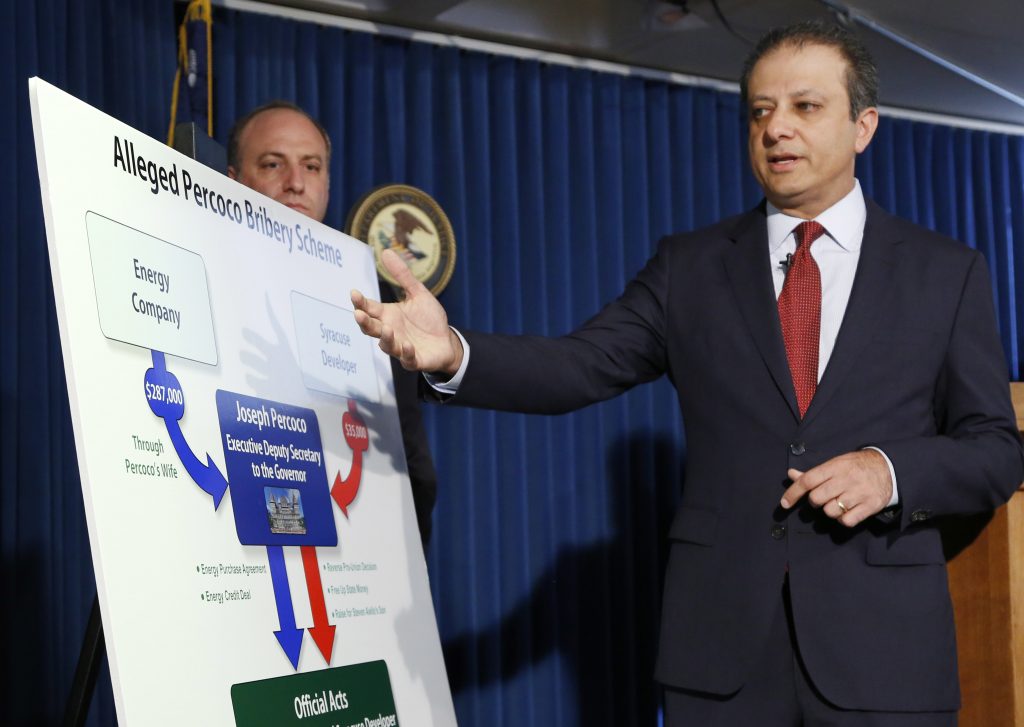 A former top adviser who Democratic Gov. Andrew Cuomo once likened to a brother was among eight men arrested Thursday in a bribery and fraud case that threatens to tarnish Cuomo’s efforts to spur the upstate economy and darken a reputation that until now has been spared from a federal prosecutor’s anti-corruption crusade.

U.S. Attorney Preet Bharara announced the charges at a news conference and said another former Cuomo aide, a ninth defendant, was cooperating after he pleaded guilty.

The prosecutor spoke sparingly when questioned specifically about Cuomo, saying: “There are no allegations of wrongdoing on the part of the governor.”

Some of the most serious allegations in a Manhattan federal court criminal complaint were brought against Joseph Percoco, formerly Cuomo’s executive deputy secretary and one of his most loyal advisers.

The court papers alleged Percoco took over $315,000 in bribes from 2012 through 2016 from Syracuse-based COR Development and Competitive Power Ventures, an energy company looking to build a power plant in the Hudson Valley.

Todd Howe, a consultant for the two companies and former Cuomo associate, set up bank accounts and a shell company to funnel bribes, including payments to Percoco’s wife, the complaint said. Howe pleaded guilty Tuesday.

“If the allegations are true, I am saddened and profoundly disappointed,” Cuomo said. “I hold my administration to the highest level of integrity. I have zero tolerance for abuse of the public trust from anyone. If anything, a friend should be held to an even higher standard.”

“Mr. Percoco performed services honestly and within the bounds of the law at all times,” he said and predicted his client will be exonerated.

The federal probe revealed a web of individuals and businesses tied to Cuomo that were poised to profit from the Buffalo Billion, Cuomo’s effort to boost New York’s second-largest city, and Nano, a high-tech jobs initiative led by defendant Alain Kaloyeros, president of SUNY Polytechnic Institute.

Howe pleaded guilty to charges, including conspiracy to commit extortion, bribery and wire and tax fraud. His attorney, Richard Morvillo, said Howe will “testify truthfully if called upon.”

In an apparent reference to Howe, Bohrer said the case against Percoco is “based on information provided by someone of utterly unreliable credibility.”

Percoco resigned as Cuomo’s executive deputy in 2014 to lead Cuomo’s re-election campaign. He rejoined the administration in late 2014 before leaving again in January to become a vice president at Madison Square Garden. In a statement, the Garden said, “We believe Joe is a man of good character and hope to see this matter resolved in a timely manner.”

According to state financial disclosures, Percoco made up to $125,000 by becoming a consultant for COR Development and CHA Consulting, two firms involved in Buffalo Billion and Nano. The firms are also big Cuomo political donors.

Peter Galbraith Kelly Jr., an executive at Competitive Power Ventures, is accused in the complaint of conspiracy and paying bribes to Percoco. The Braintree, Massachusetts, company didn’t immediately reply to requests for comment.

Authorities accused Percoco of conspiring with Kaloyeros and Howe in the Buffalo Billion project to deceive Fort Schuyler, the state-funded entity awarding the contracts, so bids would go to COR Development and Buffalo contractor LPCiminelli. They said Kaloyeros retained Howe to help him, and Howe in turn solicited and received bribes.

Also charged were COR Development executives Steven Aiello and Joseph Girardi and LPCiminelli executives Michael Laipple, Kevin Schuler and CEO Louis Ciminelli. Laipplle, Schuler and Ciminelli were released after federal court appearances Thursday in Buffalo. None of them commented as they left court. Their lawyers said they are innocent.

LPCiminelli said in a statement that company officials “acted appropriately and legally” and will be vindicated. COR didn’t respond to a request for comment. Kaloyeros wasn’t immediately available for comment.

In Bharara’s crackdown on political corruption in Albany he successfully prosecuted the former Senate majority leader and ex-Assembly speaker last year, two men who worked closely with Cuomo as the three most powerful men in the state.