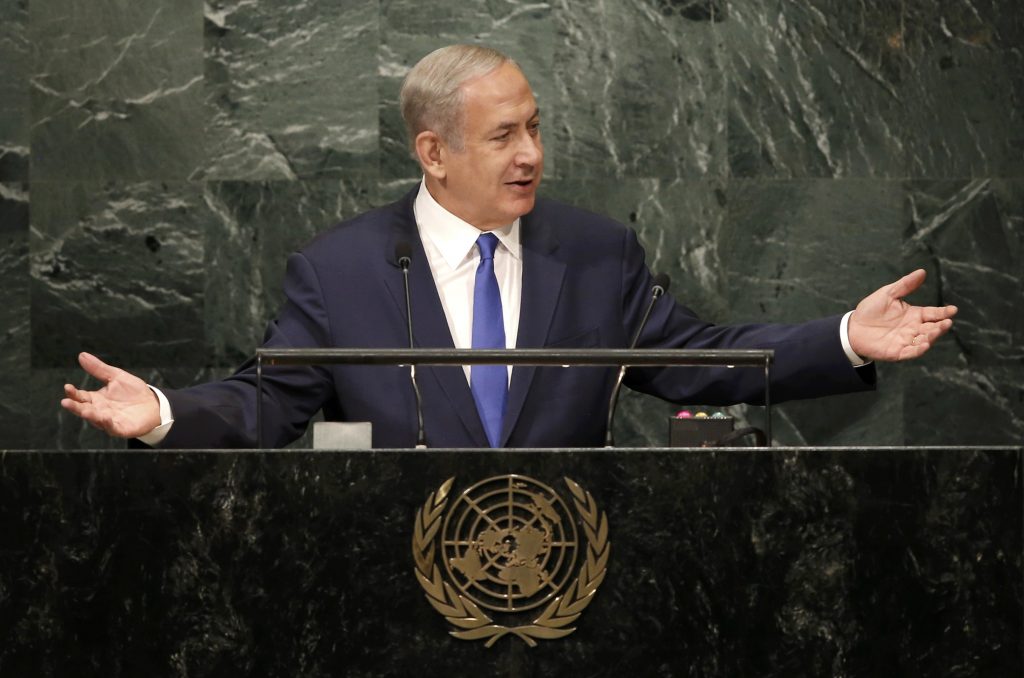 Invites Abbas to Speak at Knesset

In a speech that mixed scorn, defiance and a surprising optimism, Israeli Prime Minister Binyamin Netanyahu told the United Nations General Assembly on Thursday that the U.N. has become a “moral farce” but that the situation is rapidly changing for the better.

“The U.N. began as a moral force, and has become a moral farce,” Netanyahu said, citing the “obsession” with criticizing and condemning Israel at the international body. He noted that the U.N. passed 20 resolutions against Israel, and three against “the rest of the countries on the planet.”

However, the tongue-lashing was not the only item on Netanyahu’s agenda.

“What I’m about to say will shock you,” said Netanyahu, “but Israel has a bright future in the United Nations.”

“Lay down your arms — the war against Israel at the United Nations has ended.”

Referring to recent months of high-profile diplomatic outreach to countries in Africa and Asia, the prime minister declared confidently that more and more nations around the world see Israel as a partner.

Mentioning Israel’s assistance to others in technical innovation and security methods, he said that “many of your governments seek our help in keeping your countries safe.

“Everything will change, and a lot sooner than you think,” he said.

After telling the assembled that they would soon change their voting patterns on Israel at the world body, Netanyahu openly called Arab states “allies for security, prosperity and peace.”

“The threat Iran poses to all of us is not behind us, it’s before us,” he said. “Israel will not allow the terror state of Iran to develop nuclear weapons. Not now. Not in a decade. Not ever.”

On the subject of regional peace, Netanyahu reiterated his willingness to meet with Mahmoud Abbas, who has so far refused.

The prime minister invited him to address Israel’s Knesset instead of condemning it at the U.N.

For his own part, Netanyahu said, “I would gladly come to speak peace with the Palestinian parliament in Ramallah.”

Netanyahu was warmly applauded after saying that “the state of Israel is ready. I am ready to negotiate all final status, but one thing I will never negotiate is the right to a one and only Jewish state.”

Seemingly surprised by the positive reception, Netanyahu quipped, “Prolonged applause for the prime minister of the state of Israel in the United Nations General Assembly? Change may be coming sooner than I thought!”

Again rejecting any approach to the U.N. to settle the conflict unilaterally or through outside pressure, he insisted, “The road to peace runs through Yerushalayim and Ramallah, not New York.”

“Does anybody really believe that Israel will let the U.N. determine our security? We will not accept any attempt by the U.N. to dictate terms to Israel,” he said.

In response to Abbas’s speech just minutes earlier, in which he demanded an apology from Britain for the Balfour Declaration, Netanyahu was derisive:

“That’s almost 100 years ago. Talk about being stuck in the past!” he said. “The Palestinians might as well sue Iran for the Cyrus declarations, or a class action suit against Avraham, for buying land in Chevron.