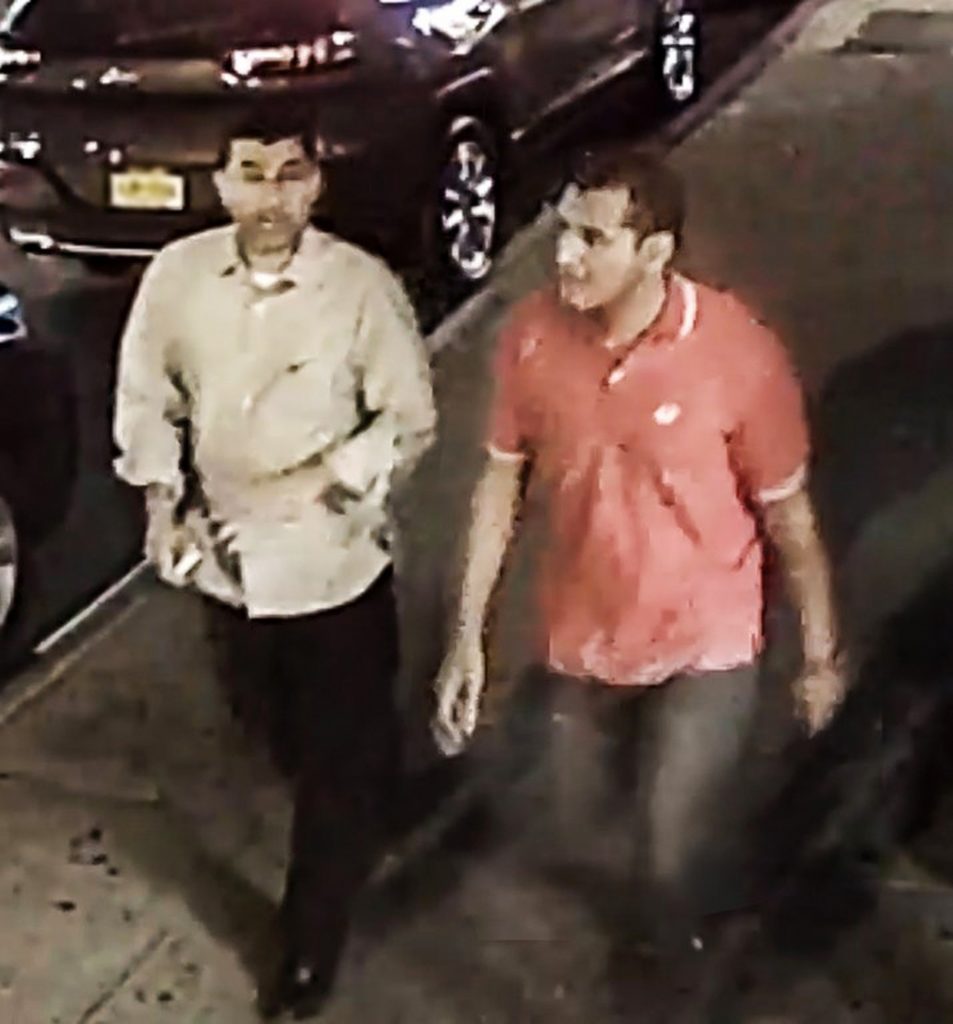 Investigators of last weekend’s bombings have released an image of two men who took a suitcase they found on a city street, possibly without realizing that a wired pressure cooker they removed from it and left behind could have blown them to bits.

Police investigating the bombings in New York and New Jersey have been saying for several days they were looking for the men, who they stressed were being sought as potential witnesses in the case, not as suspects.

“They’re not in any jeopardy of being arrested,” Jim Watters, chief of the New York Police Department’s counterterrorism unit, said on Wednesday. “We have no reason to believe they’re connected.”

Federal prosecutors have charged Ahmad Khan Rahami with detonating a pipe bomb in a New Jersey shore town on Saturday morning and a pressure cooker bomb in New York City’s Chelsea neighborhood later that night. Thirty-one people were injured in the New York blast. A second pressure cooker bomb left in Manhattan didn’t explode and is the subject of the latest public plea.

Prosecutors said surveillance video shows Rahami rolling a suitcase down the street, then abandoning it on the sidewalk where that second device was found.

“I think they were more interested in the bag, not what they were taking out,” Watters said, adding that they were “very, very lucky” the bomb didn’t explode.

In court papers, a public defender sought a court appearance for Rahami, an Afghan-born U.S. citizen, so he can hear the federal terrorism charges against him.

On Wednesday night, Manhattan U.S. Magistrate Judge Gabriel W. Gorenstein refused a request by Federal Defenders of New York to schedule an initial appearance for Rahami on federal charges, even if it must be conducted remotely from a hospital bed.

The judge noted that court rules require an arrested person be brought before the court “without unnecessary delay.”

He said there is no evidence contrary to government claims that Rahami remains held on state charges in New Jersey and has not yet been arrested on the federal charges.

The judge was also unpersuaded by federal defender claims that federal law enforcement is involved in detaining and questioning Rahami.

“In fact, this question is very much in dispute,” Gorenstein wrote.

Rahami, 28, was arrested on Monday following a shootout with police in Linden, New Jersey. He is being held on $5.2 million bail, and he faces state charges of attempted murder of police officers.

Attorney General Loretta Lynch said Rahami will be moved to New York to face federal charges in the “near future.”

In a bloodied journal recovered by investigators, Rahami made references to Osama bin Laden, American-born Muslim cleric Anwar al-Awlaki and former Army officer Nidal Hasan, who went on a shooting rampage in Ford Hood, Texas, according to a federal complaint.

In one section, the complaint says, Rahami wrote: “Death to your oppression.”

Two federal law enforcement officials said Rahami’s wife, thought to be a Pakistani national, will return soon to the United States. One of the officials said the wife made a statement to authorities after walking into the U.S. Embassy in the United Arab Emirates. The other official said investigators believe she left the U.S. for Pakistan in June. The officials spoke on the condition of anonymity because they weren’t authorized to discuss the ongoing case.

Meanwhile, Democratic Gov. Andrew Cuomo, touring the site of the Manhattan blast on Wednesday, said he believes insurance companies will cover most of the losses incurred by those whose businesses and homes were damaged. But he said if there are gaps in coverage, the state would pay for anything left outstanding from its emergency funds.

Also Wednesday, a homeless man who took a backpack from a garbage can near a train station in Elizabeth, New Jersey on Sunday night, not knowing it contained pipe bombs prosecutors say were made by Rahami, said he’s grateful he didn’t prompt an explosion.

“I don’t like to think about what could have happened, but I’m just so blessed and glad it didn’t,” Lee Parker said. “I still have my nine lives, I guess, and I’m going to keep trying to live them well.”