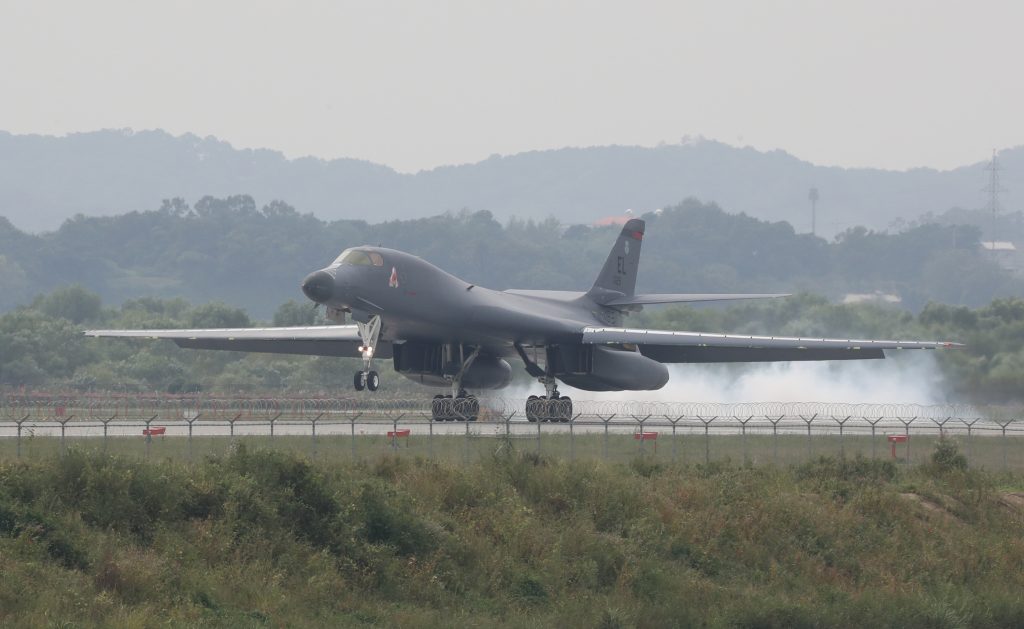 The United States on Wednesday flew a pair of supersonic bombers over ally South Korea for the second time in as many weeks in a show of force following North Korea’s latest nuclear test earlier this month.

U.S. Forces Korea said one of the two B-1B bombers landed at Osan Air Base, 75 miles from the border with North Korea, but did not say when it will return to Andersen Air Force Base in Guam.

Such flyovers are common when animosity rises on the Korean Peninsula, which is technically in a state of war because the 1950-53 Korean War ended with an armistice, not a peace treaty. The United States also flew two B-1B bombers over South Korea on Sept. 13.

“What we are showing today is just one tool we have to choose from a wide array of options. The alliance grows stronger every day and we remain prepared to defend and to preserve the security of the Korean Peninsula and the region,” Lt. Gen. Thomas Bergeson, commander of the U.S. 7th Air Force in South Korea, said in a statement.

North Korea uses such flyovers and the American military presence in the South in its propaganda as alleged proof of U.S. hostility, which it says is the reason it needs a nuclear weapons program. After last week’s flyover, North Korea’s official Korean Central News Agency described the B-1B as an “ill-famed nuclear war means” and accused the United States of resorting to “nuclear threat and blackmail” against the North.

The B-1B doesn’t currently carry nuclear weapons under a disarmament treaty, and some U.S. experts do not consider them as nuclear capable in their current configuration.

Military experts raise concerns that North Korea is moving closer toward obtaining the ability to put nuclear warheads on a variety of its ballistic missiles, a growing arsenal that one day may include a reliable weapon that could reach the U.S. mainland.

North Korea conducted its fifth and most powerful nuclear test to date on Sept. 9, claiming it as a successful nuclear warhead detonation that proved its ability to mass produce “standardized” nuclear weapons that could be used on missiles.

There is a possibility that North Korea will follow its latest nuclear test with a long-range rocket launch as it did after its fourth nuclear test in January. The North’s state media on Tuesday said leader Kim Jong Un observed a ground test of a new rocket engine and ordered a satellite launch preparation.