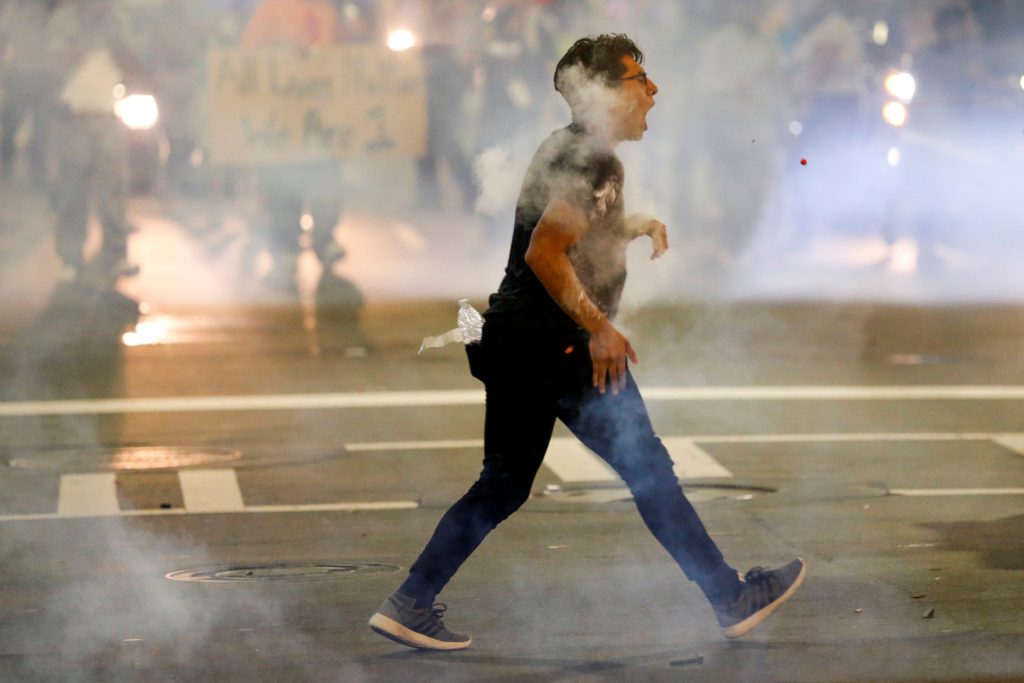 One person was shot and gravely wounded on Wednesday in a second night of unrest in Charlotte, North Carolina, officials said, as riot police fired tear gas and rubber bullets to disperse unruly protesters after the fatal police shooting of a black man.

North Carolina’s mayor later declared a state of emergency amid the unrest and said the National Guard and state highway patrol troopers would be sent to help police in Charlotte.

Charlotte Police Chief Kerr Putney initially reported that a person shot during the protest had died, but city officials later posted a Twitter message saying the individual had been hospitalized in critical condition on life support.

The city also said the gunshot was fired by one civilian at another, not by police. A police officer was also being treated for injuries suffered during the protests, the city said.

Putney told Fox News: “We’re trying to disperse the crowd. We’ve been very patient, but now they’ve become very aggressive, throwing bottles and so forth, at my officers, so it’s time for us now to restore order.”

The flashpoint for Charlotte’s unrest was Tuesday’s fatal police shooting of Keith Scott, 43, who according to police was armed with a handgun and refused officers’ orders to drop the weapon. His family and a witness to the shooting said Scott was holding a book, not a firearm.

Governor Pat McCrory said he was sending officers from the state Highway Patrol to assist local law enforcement at the request of Charlotte’s police chief.

“Any violence directed toward our citizens or police officers or destruction of property should not be tolerated,” McCrory said in a statement.

Authorities have not released any video of the incident but the city’s mayor said they planned to do so and the mayor said she would view the footage on Thursday.

The latest trouble began with a peaceful rally that turned violent after several hundred demonstrators, chanting, “Black lives matter” and “No justice, no peace,” marched through downtown with brief stops at a black church, police headquarters and a large entertainment venue called the EpiCentre.

As they approached downtown Charlotte’s central intersection, protesters confronted a column of patrol cars and officers in front of the Omni Charlotte Hotel and began to surround groups of police and their vehicles.

Police then unleashed volleys of rubber bullets, tear gas and flash-bang grenades to disperse the protesters, who began hurling fireworks and debris at officers outside the hotel.

The confrontation grew more intense as a phalanx of helmeted police carrying shields advanced down a street, pushing back a crowd of demonstrators who scurried for cover as officers fired more tear gas.

Protesters were also seen looting a convenience store after smashing its windows and a shop that sells athletic wear for fans of Charlotte’s National Basketball League team, the Hornets. Others set fire to trash cans.

A Charlotte resident, who gave his name only as Howard, told Reuters that the man shot Wednesday night was standing directly in front of him.

“My first thought was it was non-lethal because police were shooting rubber bullets,” he said. However, the man lay on the ground motionless for a couple of minutes before someone rolled him over and blood was coming from his head, the witness said.

Some protesters expressed anger at the lawlessness exhibited by fellow demonstrators. One woman was heard shouting, “Stop – that’s not what this is about,” as young women broke bottles in the street.

“We are tired of people, especially police, killing our black men,” Blanche Penn, a longtime community activist, said at Wednesday evening’s rally, where the mood had begun as resolute but peaceful. “Charlotte has always been quiet. But now it’s time to be loud.”

Scott’s wife, Rakeyia, issued a statement describing her family as “devastated” and appealing for calm. “We have more questions than answers about Keith’s death,” the statement said.

Sixteen officers were injured late on Tuesday and early Wednesday as police in riot gear clashed with demonstrators who hurled stones, set fires and briefly blocked an interstate highway.

Tuesday’s disturbances in Charlotte unfolded as demonstrators in Tulsa, Oklahoma, demanded the arrest of a police officer seen in a video last week fatally shooting an unarmed black man who had his hands in clear view at the time.

The deaths were the latest incidents to raise questions of racial bias in U.S. law enforcement, and they stoked a national debate on policing ahead of the presidential election in November. President Barack Obama spoke by telephone on Wednesday with the mayors of Charlotte and Tulsa, a White House official said.