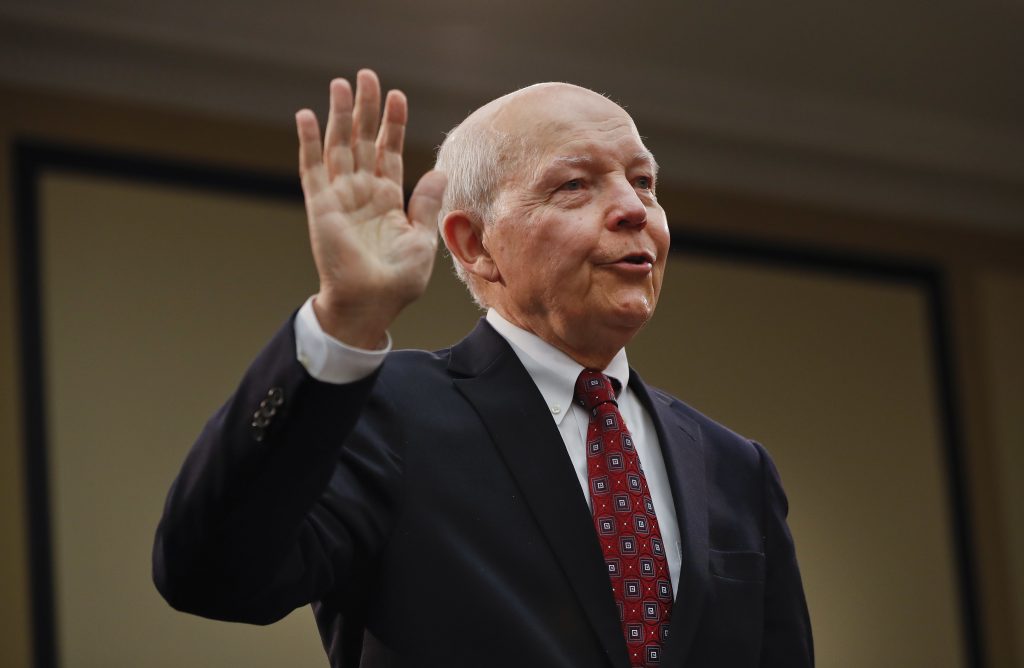 IRS Commissioner John Koskinen expressed regret to Congress on Wednesday for his agency’s past mistreatment of tea party groups, but said he has cooperated with congressional investigators and does not deserve to be impeached.

The IRS chief made the remarks at a House Judiciary Committee hearing on a drive by hard-line conservatives to oust Koskinen. Their impeachment resolution accuses him of lying to lawmakers, ignoring subpoenas and overseeing an agency that destroyed emails, as Congress investigated how the IRS subjected tea party groups seeking tax exemptions to harsh investigations years ago.

The agency has apologized for its actions and Koskinen has said he’s done nothing wrong. Government investigators have found no evidence that Koskinen or the IRS purposely destroyed evidence or that the agency’s actions were politically motivated.

“I did nothing to impede the operation of the Congress,” Koskinen, speaking under oath, told the lawmakers.

Besides solid opposition from Democrats, the push has divided Republicans, won no backing from GOP leaders and has no chance of garnering the votes Congress would need to oust him.

But Rep. John Conyers of Michigan, the panel’s top Democrat, said Republicans were engaged in “partisan attacks cloaked in the impeachment process” that he said “are doomed from the start.”

Rep. Jerrold Nadler, D-N.Y., asked if people under IRS audit are free to release their tax returns, a situation Trump has asserted in refusing to release his forms. Koskinen said such taxpayers can release their returns.

Nadler also asked whether someone can use money from a charitable foundation to buy a portrait or a football helmet autographed by former quarterback Tim Tebow or to pay fees from legal disputes. Reports have said money from the Donald J. Trump Foundation has been used for those purposes.

Koskinen said, generally, charitable money shouldn’t be used to benefit someone who runs a charitable foundation. He declined to comment on specific details.

The IRS chief told lawmakers he’s been truthful and has provided all the documents he could to investigators. He said impeaching him would be “improper.”

Without being specific, he also conceded: “The truth is that we did not succeed in preserving all of the information requested and some of my testimony later proved mistaken. I regret both of those failings.”

Koskinen told lawmakers in June 2014 that no emails had been destroyed since congressional investigations began. One year later, Koskinen learned that backup tapes containing numerous emails had been erased by IRS workers in Martinsburg, West Virginia, in March of 2014.

Many GOP lawmakers want to avoid an impeachment showdown in the shadow of November’s elections, fearing it could alienate independents who could consider the effort overly partisan and confrontational.

Last week, members of the Freedom Caucus agreed to Wednesday’s hearing after dropping plans to force an immediate House impeachment vote. Caucus members conceded they would have likely lost.

However, one lawmaker in that group, Rep. Tim Huelskamp, R-Kan., has not ruled out forcing an impeachment vote before the November elections.

In May 2013, the IRS conceded that during the 2010 and 2012 elections, it subjected conservative groups seeking tax exemptions to excessively harsh examinations. Many groups with those tax exemptions play major roles in political campaigns, and they are not required to reveal donors.

Koskinen joined the agency in December 2013, after the improper actions occurred.

A focus of those investigations was Lois Lerner, who had led the IRS office that processes applications for tax exempt status. She refused to answer lawmakers’ questions and later retired.

In June 2014, the IRS told Congress that it lost an unknown number of Lerner’s emails when her hard drive crashed in 2011.

Then in June 2015, the IRS inspector general said the agency had accidentally erased 422 backup tapes in March 2014 that could have had up to 24,000 of Lerner’s emails.